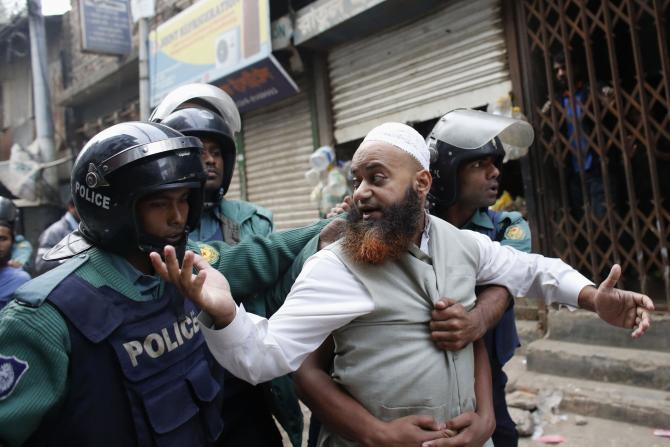 Democracy, freedom of opinion and the right to elect and hold the ruler accountable, are slogans that are raised under the existing man-made regimes in the world today, however, the falsity of these slogans is soon revealed when an individual or a group criticizes these regimes and their corruption, or demands a right that they have lost or duties that they failed to fulfil for their people. The prisons of Russia, the heir to the Soviet Union, which celebrates the day of the victims of political persecution on 3/10 each year, commemorating the hunger strike which took place on 30/10/1974 CE and started by prisoners in the camps of Mardovia and Perm, where the political prisoners declared a hunger strike in protest against political persecution which was exercised by the Soviet Union, these prisons are a witness to it, and the prisons of the criminal regimes in the Islamic world, and their executioners in Egypt, Syria, Libya, Uzbekistan and other Muslim countries also attest to this.

And because the Khilafah (Caliphate) is a system from the Wise who is Acquainted with all things, and because it is the authentic solution and not an alternative to these man-made regimes, we will present in this article broad lines that prevent the repression and political persecution that we are witnessing today:

1- The Khilafah state is not a police state that tightens its grip on the people and monitors their movements, and set up cameras to monitor them in public and sometimes even private places. Or monitors their phones or accounts on electronic sites, arresting them and torturing them because of a tweet or publication on these websites, or hiding them behind the sun “because of their political affiliations” as do the regimes in the Islamic world today. Islam has forbidden to spy on Muslims by the text of the Ayah وَلَا تَجَسَّسُوا “And do not spy” [Al-Hujurat: 12]. This is general prohibition of spying and it has to continue as general unless there is specific evidence. This is confirmed by the narration reported by Ahmad and Abu Dawud with a chain from Al-Miqdad and Abu Umamah when they said: «إِنَّ الأَمِيرَ إِذَا ابْتَغَى الرِّيبَةَ مِنَ النَّاسِ أَفْسَدَهُمْ» “When a ruler seeks to make imputations against the people, he corrupts them.”

Therefore, spying on a Muslim is prohibited. This rule also applies on the people of Dhimmah from the citizens of the State. Thus, spying is prohibited upon the citizens, Muslims and non-Muslims.

Islam also forbade the ruler to torture and harm people. Muslim narrated in his Sahih from Hisham ibn Hakim ibn Hizam, He said: I heard the Messenger of Allah ﷺ, he says: «إِنَّ اللهَ يُعَذِّبُ الَّذِينَ يُعَذِّبُونَ النَّاسَ فِي الدُّنْيَا» “Allah would torture those who torture people in this world”.  The Messenger of Allah ﷺ also said: «صِنْفَانِ مِنْ أَهْلِ النَّارِ لَمْ أَرَهُمَا، قَوْمٌ مَعَهُمْ سِياطٌ كَأَذْنَابِ الْبَقَرِ يَضْرِبُونَ بِهَا النَّاسَ…» “There are two types of the people of Hell (Fire) that I have not seen yet: men with whips like the tails of cattle, with which they strike the people…” (Narrated by Muslim). Islam has also forbidden to attack the sanctity of Muslims, their dignity, and their properties and to violate their homes, the Messenger of Allah ﷺ said: «كُلُّ الْمُسْلِمِ عَلَى الْمُسْلِمِ حَرَامٌ دَمُهُ وَمَالُهُ وَعِرْضُهُ» “It is prohibited for the Muslim to violate a Muslim over his blood, and his money, and his honor”.

2- Under the Khilafah, people have the right to speak and express their opinion, and to hold the rulers accountable and change them if they deny the rights of the citizens, fail to fulfill their duties towards them, neglect their affairs, violate the rulings of Islam or judge by other than what Allah has revealed. People have the right to do that whether individually or collectively through the Ummah Council or the existing parties in the State. Allah Almighty has made enjoining what is right (Ma’ruf) and forbidding what is wrong (Munkar) obligatory upon Muslims, He (swt) says: الَّذِينَ إِن مَّكَّنَّاهُمْ فِي الْأَرْضِ أَقَامُوا الصَّلَاةَ وَآتَوُا الزَّكَاةَ وَأَمَرُوا بِالْمَعْرُوفِ وَنَهَوْا عَنِ الْمُنكَرِ “[And they are] those who, if We give them authority in the land, establish prayer and give zakah and enjoin what is right and forbid what is wrong.” [Al-Hajj: 41].

And there have been Ahadith that mention the accountability of the ruler in particular. Muslim narrated in his Saheeh from Umm Salamah (ra) that the Messenger of Allah ﷺ said: «سَتَكُونُ أُمَرَاءُ فَتَعْرِفُونَ وَتُنْكِرُونَ، فَمَنْ عَرَفَ بَرِئَ، وَمَنْ أَنْكَرَ سَلِمَ، وَلَكِنْ مَنْ رَضِيَ وَتَابَعَ» قَالُوا: أَفَلا نُقَاتِلُهُمْ؟ قَالَ: «لا، مَا صَلَّوْا» “There will be Amirs (rulers) and you will like their good deeds and dislike their bad deeds. One who sees through their deeds (and tries to prevent their repetition), is absolved from blame, and one who hates their bad deeds (in their hearts, being unable to prevent their recurrence), is (also) safe. But one who approves of their bad deeds and imitates them is spiritually ruined”. They asked: “Shouldn’t we fight against them?” He replied: “No, as long as they still pray” and prayer here is a metaphor for ruling by Islam.

The Prophet ﷺ, urged to fight the unjust rulers, regardless of the harm that may take place in the cause of doing so, even if it leads to murder, where he ﷺ said: «سَـِّيدُ الشُّهَدَاءِ حَمْزَةُ بْنُ عَبْدِ الْمُطَّلِبِ وَرَجُلٌ قَامَ إِلَى إِمَامٍ جَائِرٍ فَأَمَرَهُ وَنَهَاهُ فَقَتَلَهُ» “The master of the Martyrs is Hamzah bin Abdul Muttalib, and a man who stood to an oppressor ruler where he ordered him and forbade him and so he (the ruler) killed him.”

This is one of the most eloquent wordings in expressing the Truth and to endure the harm to death in order to hold accountable the rulers and struggle against the oppressive rulers.

There are many evidences in the history of Muslims about Muslims accounting the rulers and demanding their rights without being denied by anyone. They held Omar ibn al-Khattab accountable, while on the pulpit, over the division of the Yemeni garments. Likewise, Bilal and Az-Zubayr among others, objected and disputed with him because he did not split the land of Sawad in Iraq after its opening; he discussed and consulted the companions until he persuaded them of his opinion. As well as Ali (ra) denied Othman (ra), who was the Commander of the believers, his opinion in the completion of Hajj and Umrah.

3- Under the Khilafah, the Ummah Council will be representative of the people and their concerns truly and not in a fictitious manner. It will represent them in expressing the opinion on their behalf, raising their complaints, and holding the Khalifa and those in power accountable. Muslims and non-Muslims, men and women, are entitled to be members of this Council, where Article 107 of the Draft Constitution prepared by Hizb ut Tahrir states:

“Every citizen who is adult and sane, has the right to be a member of the Ummah Council or the Provincial Council, whether they are male, female, Muslim or non-Muslim; the non-Muslim member is restricted to raising complaints regarding the oppression of the rulers or the misapplication of the laws of Islam.”

4- Under the Khilafah, the judiciary will not be a tool for oppressing and suppressing people, preventing them from exercising their natural right to account and expressing opinions, fabricating the charges against them because of their political affiliation and issuing unjust sentences against them, as happened in the cold blooded execution of nine youths from Egypt on Wednesday morning, 20 February 2019, based on confessions extracted under electric torture. Instead, the courts would be a beacon of the truth, justice and returning rights to their owners. There will not be immunity to the ruler or any employee in the state. There will be a specialized court to hear cases against the Khalifah or the people in authority, namely, the Court of Mazalim (Unjust Acts). Where, the Judiciary of Mazalim is responsible “for delivering of the divine rule by way of compulsion in regarding any dispute there may be between the citizens and the Khalifah or any of his Walis or employees, or any difference between the Muslims about the interpretation of any of the Shariah texts to be used in order to judge by them and to rule according to them.” (The Institutions of State in the Khilafah in Ruling and Administration). In the history of Muslims, the Khalifah of Muslims sat with one of his subjects before the judiciary and the judge gave verdict for the opponent and condemned the Khalifah. The story of Omar ibn al-Khattab with the man who he wanted to buy the horses from him is well-known, as is the story of the judge who issued his ruling requesting Omar bin Abdul Aziz to withdraw his army from the country they opened because they did not invite its people to Islam before mobilizing the armies, and other stories that can be referred to.

5- Under the Khilafah, the establishment of political parties in the State is not prohibited, provided that they are based on Islam, and the establishment of such parties does not require the authorization of the State. Article 21 of the Draft Constitution prepared by Hizb ut Tahrir states: “The Muslims have the right to establish political parties in order to account the rulers or to reach the rule through the Ummah on the condition that their basis is the Islamic Aqeedah and that the rules they adopt are Shari’ah rules. The formation of a party does not require any permission. Any group formed on an un-Islamic basis is prohibited.” Its evidence is the words of Allah (swt): وَلْتَكُنْ مِنْكُمْ أُمَّةٌ يَدْعُونَ إِلَى الْخَيْرِ وَيَأْمُرُونَ بِالْمَعْرُوفِ وَيَنْهَوْنَ عَنِ الْمُنْكَرِ وَأُولَئِكَ هُمُ الْمُفْلِحُونَ “And let there be [arising] from you a nation (a band of people) inviting to [all that is] good, enjoining what is right and forbidding what is wrong, and those will be the successful” [Al-i-Imaran:104].

The angle of using this verse as an evidence for the establishment of political parties is that Allah (swt) ordered the Muslims to have a group which carries out the Da’wah to Islam amongst them, and likewise carries out enjoining the Ma’ruf and forbidding the Munkar.

6- Under the Khilafah sovereignty belongs to the Shariah and authority is for the Ummah. The Ummah chooses its ruler and gives him the pledge of allegiance upon the Book of Allah (swt) and the Sunnah His Messenger ﷺ to implement the Shariah. The ruler is not imposed on them to implement the will of his masters, as is the case today in the Muslim countries. The Khilafah state has real political will, and exercises politics in its true sense; taking care of the affairs of the people, not dominating over their necks and suppressing and oppressing them. And under the Khilafah, the ruler and the citizens subject to the rulings of Sharia and the obedience of the citizens to the ruler is conditional upon his compliance to the rulings of Sharia: يَا أَيُّهَا الَّذِينَ آمَنُوا أَطِيعُوا اللَّهَ وَأَطِيعُوا الرَّسُولَ وَأُولِي الْأَمْرِ مِنكُمْ فَإِن تَنَازَعْتُمْ فِي شَيْءٍ فَرُدُّوهُ إِلَى اللَّهِ وَالرَّسُولِ إِن كُنتُمْ تُؤْمِنُونَ بِاللَّهِ وَالْيَوْمِ الْآخِرِ ذَٰلِكَ خَيْرٌ وَأَحْسَنُ تَأْوِيلاً “O you who have believed, obey Allah and obey the Messenger and those in authority among you. And if you disagree over anything, refer it to Allah and the Messenger, if you should believe in Allah and the Last Day. That is the best [way] and best in result.” [An-Nisa: 59]

In conclusion, I would go back to what I started with, recalling that the Khilafah Rashidah on the method of the Prophethood is the authentic solution to the problems of the Ummah, rather, of all humanity. It is a unique distinct system from the Wise One who is Acquainted with all things. Then is it not enough 98 years of injustice, oppression and misery without Khilafah?! Should not we strengthen our determination and hasten to establish it?!