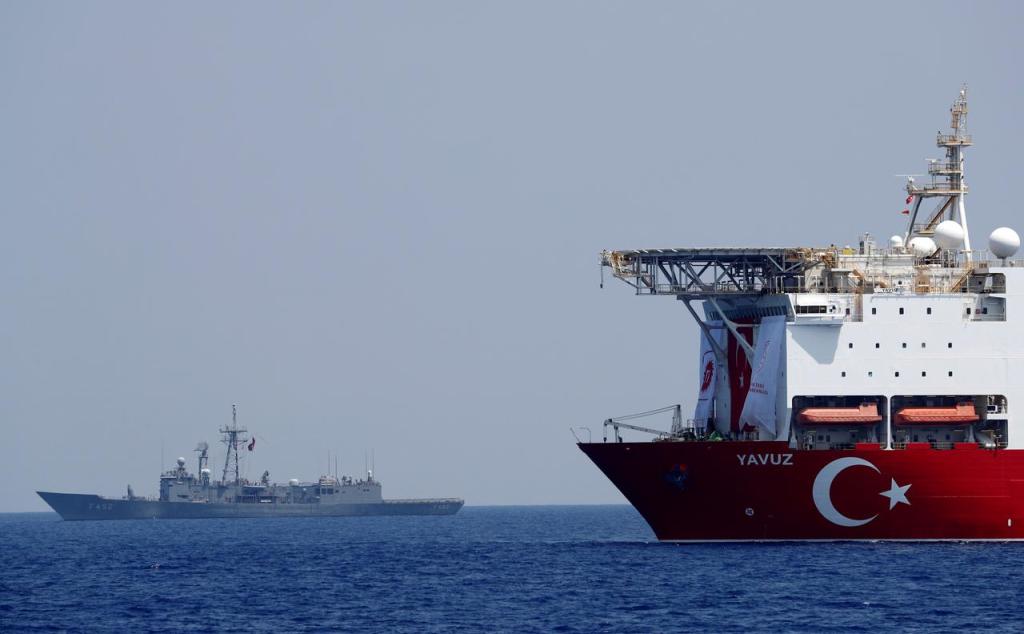 This week, Turkish President Recep Tayyip Erdogan ratcheted up the pressure on Greece. Referring to efforts undertaken by Greek Cypriots to issue licenses to foreign companies to conduct offshore drilling, Erdogan said, “They will understand that Turkey has the political, economic and military strength to tear up immoral maps and documents.” [Arab News] Ankara is actively contesting the right of Greek Cypriots to drill for gas in its waters and has sent Turkish research vessels in the vicinity to conduct seismic activity. The latest tensions between the two erstwhile enemies have raised the prospects of another war.

Greek Cypriots backed by Athens are not alone in their quest to exploit underwater energy reserves. Earlier, this year the Jewish state, Greece and Cyprus signed an agreement to construct a pipeline to carry gas from the Eastern Mediterranean to Europe. The 2,000-kilometer (1,200-mile) EastMed pipeline will be able to carry between 9 to 12 billion cubic meters of gas a year from offshore reserves held by “Israel” and Cyprus to Greece, and then shipped to Italy and other southeastern European countries. Despite Turkey’s objections to the deal, Egypt also signed a gas pipeline deal with Greek Cyprus in November 2019.

To deter Turkey’s increasing presence in the Eastern Mediterranean, France has sent its fighter planes and warships to the region, and the EU is offering full diplomatic support. As for America, the Trump administration initially stood by Greek Cyprus but as of late has tapered its criticism of Turkey in return for Ankara’s deep involvement in shoring up US interests in Libya and Syria.

To offset the growing presence of naval vessels and military hardware directed against Turkey’s Eastern Mediterranean presence, Erdogan has invited Russia for military exercises. Russia opposes the EastMed pipeline, as it allows Europe to decrease its energy dependence on Russian gas. Nevertheless, Turkey’s real concern is that with the Treaty of Lausanne ending in 2023, Western powers are using Greek Cyprus’s claim on gas reserves as a pretext to confine Turkey’s navy to a small area in the Eastern Mediterranean.

No matter how hard Erdogan tries to rescue Turkey from another disaster his efforts are likely to end in failure. This is because Erdogan is using the same laws and rules established by the West to imprison Turks within the confines of the nation state, which occurred soon after the fall of the Caliphate in 1924.  The only salvation for the Muslim of Turk is to abandon the nation state model imposed by the foreign colonial powers and return to the rightly guided Caliphate.

When Turks ruled by Islam they dominated the world, especially Europe. The Ottoman state was both a continental power as well as a sea power, and Europe struggled to compete with it.  The Ottomans ruled Greece for 368 years and controlled the whole of the Mediterranean Sea, along with the Black Sea, Red Sea, Arabian Gulf, Indian Ocean as well as the Malacca Straits for more than 200 years. From 1499 to 1600s the Ottomans scored famous victories against Europeans, and controlled all of the waterways from the Eastern Mediterranean to the Western Mediterranean.

The Ottomans suffered their first major defeat at the third battle of Lepanto in 1571 located in the Eastern Mediterranean but managed take Cyprus.  Speaking after the battle, Sultan Selim II’s Chief Minister, the Grand Vizier Mehmed Sokullu said to a Venetian emissary, “In wrestling Cyprus from you, we deprived you of an arm; in defeating our fleet, you have only shaved our beard. An arm when cut off cannot grow again; but a shorn beard will grow all the better for the razor.” [Wikipedia] Within a year the Ottomans rebuilt their navy and once more exerted primacy over the Mediterranean Sea much to the annoyance of the Europeans.

The current standoff between Turkey, Europe and its Mediterranean allies in some ways is shaping up to be another Lepanto. The only way for Turkey to take advantage of this situation is to declare Khilafah Rashidah (rightly guided Caliphate) and force Egypt to abandon the EU and Greece. The combined naval strength of Egypt and Turkey is enough to not only deter Greece but also to annex Cyprus completely, and tear up the immoral maps subjugating the Muslim world.