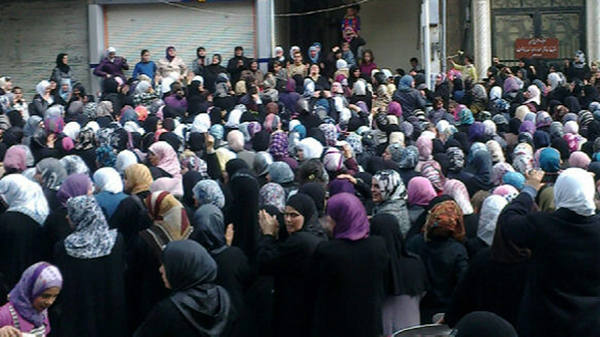 Islam obliges women to have an active role in the politics of their society: taking care of the affairs of their Ummah, speaking out against oppression and corruption, commanding the good (Maruf) and forbidding the evil (Munkar), and holding their rulers to account. The Islamic evidences commanding Muslims to be politically active apply to men and women alike. وَالْمُؤْمِنُونَ وَالْمُؤْمِنَاتُ بَعْضُهُمْ أَوْلِيَاء بَعْضٍ يَأْمُرُونَ بِالْمَعْرُوفِ وَيَنْهَوْنَ عَنِ الْمُنكَرِ “The believers, men and women, are protecting friends (Awliya) of one another; they enjoin the Ma’ruf (the good which Allah commands) and forbid people from Munkar (the evil which Allah prohibits)…” [At-Taubah: 71]

The Prophet ﷺ said «كَلاَّ وَاللَّهِ لَتَأْمُرُنَّ بِالْمَعْرُوفِ وَلَتَنْهَوُنَّ عَنِ الْمُنْكَرِ وَلَتَأْخُذُنَّ عَلَى يَدَىِ الظَّالِمِ وَلَتَأْطُرُنَّهُ عَلَى الْحَقِّ أَطْرًا وَلَتَقْصُرُنَّهُ عَلَى الْحَقِّ قَصْرًا» “Nay, by Allah, you have to enjoin the Ma’ruf and forbid the Munkar, and to hold against the hand of the tyrant, and to force him on the truth truly and to limit him to the truth really, otherwise Allah will hit the hearts of some of you against others, then He will curse you as He cursed them”. [Abu Dawud]

Women have the same political rights as men under the Khilafah.

“All citizens of the State shall be treated equally regardless of religion, race, colour or any other matter. The State is forbidden to discriminate among its citizens in all matters…” (Article 6, Hizb ut Tahrir’s Draft Constitution of Al-Khilafah)

Accountability and transparency are integral pillars of Islamic rule. The Khilafah will therefore provide women multiple avenues to raise grievances against the state or account the ruler. It will facilitate and encourage them in expressing their political opinions.

“Calling upon the rulers to account for their actions is both a right for the Muslims and a fard kifaayah (collective duty) upon them.” (Article 20, Hizb ut Tahrir’s Draft Constitution of Al-Khilafah)

Two women – Nusaybah bint Ka’ab Umm ‘Amarah and Asma bint Amr ibn Adi – were amongst the delegation of the Muslims of Yathrib at the Second Pledge of Al-Aqaba. This was a pledge of political support and military protection given to the Prophet ﷺ, accepting him as the leader of their state.

When Amr bin Al-‘As (ra) was consulting the citizens of the Khilafah as to whom they wished to be their leader after the death of Khalifah Umar bin Al-Khattab (ra), he sought the views of women and men alike.

“The woman can elect members of the Ummah’s council, and be a member herself, and she can participate in the election of the Head of State and in giving him the pledge of allegiance.” (Article 115, Hizb ut Tahrir’s Draft Constitution of Al-Khilafah)

Under the Khilafah women can be members of political parties, raise their views in an independent media, be journalists or establish media outlets without the need for a license.

Women will have the right to be elected representatives of the Majlis Al-Wilayah or the Majlis Al-Ummah councils which advise and account governors and the Khalifah in all matters of the state.

“Every citizen of the State has the right to become a member of the Majlis al-Ummah, or the Provincial Council…..This applies to Muslim and non-Muslim.” (Article 107, Hizb ut Tahrir’s Draft Constitution of Al-Khilafah)

In Islam, the political views of women are valued.

The Prophet ﷺ consulted and took the advice of his wife Umm Salamah (ra) when he faced a serious political crisis at the Treaty of Hudaibiyah.

Umar bin Al-Khattab (ra), the second Khalifah of Islam would gather men and women in the mosque and seek their opinions on various matters. He would also consult a woman called Al-Shifa bint Abdullah on various political matters due to her intelligence and insight, often giving preference to her opinions over others.

In a public gathering during the rule of Umar bin Al-Khattab (ra) when he was ordering the people not to set excessive amounts of dowry in marriage, an old woman openly challenged the Khalifah in his opinion, shouting, “Umar! You have no right to intervene in a matter which Allah the All-Mighty has already decreed in the Qur’an”, reciting the ayah in Surah An-Nisa, verse 20 to prove her point. The Khalifah responded, “The woman is right and Umar is wrong”, and he withdrew his order.

Nafisa Bint Hasan was a re-known 9th century scholar in Egypt under the Abbasid Khilafah. She was heavily involved in the politics of her society such that when people had disputes with the governor of Egypt they would request her to resolve the situation and get their rights met.

The Khilafah will enable women to take complaints against rulers or officials of the state to the Makhkaamat ul-Madhalim, a special court that investigates negligence or injustice in ruling, allowing women to openly account their rulers without fear.

“The judge of the Makhkaamatul-Madhalim is appointed to remove all unjust acts, committed by the Khaleefah, governor(s) or any official of the State, that have been inflicted upon anyone…” (Article 87, Hizb ut Tahrir’s Draft Constitution of Al-Khilafah)

Mamoon Ar-Rashid, one of the Abbassid Khalifahs, would specifically set aside Sundays for his public audience to hear their complaints. From early morning till afternoon, everyone – men and women – were free to present to the Khalifah their grievance which was instantly attended to. One day a poor old woman complained that a cruel person had usurped her property. “Who is that person?” asked the Khalifah. “He is sitting beside you,” replied the old woman, pointing to the Khalifah’s son, Abbas. Abbas tried to defend his action in a hesitant tone while the old woman was getting louder and louder in her arguments. The Khalifah stated that it was the honesty of her case that had made her bold and gave a judgement in her favour.

In accordance with Islamic texts, the woman cannot be a ruler in the Khilafah but this in no way impinges on her ability to engage fully in the politics of her society. Furthermore, Islam does not view being a ruler as a right or privilege but rather a great responsibility linked with immense accountability in the Hereafter. A woman can however be an official or representative of the state in a non-ruling position, such as the head of a department or spokeswoman. لَمَّا هَلَكَ كِسْرَى سَأَلَ رَسُولِ اللَّهِ صلى الله عليه وسلم: ‏«مَنِ اسْتَخْلَفُوا؟»‏ قَالُوا: بِنْتَهُ‏.‏ قَالَ: «لَنْ يُفْلِحَ قَوْمٌ وَلَّوْا أَمْرَهُمُ امْرَأَةً» The Prophet ﷺ, when hearing that the people of Persia had appointed the daughter of Chosroes as their queen, said, “No people will ever prosper who appoint a woman in charge of them.”

“Any citizen of the state, male or female, Muslim or not, who is suitably competent may be appointed as head or a civil servant of any administration, directorate or department.” (Article 98, Hizb ut Tahrir’s Draft Constitution of Al-Khilafah)

“It is permitted for a woman to be appointed in civil service and positions in the judiciary apart from the Court of Injustices.” (Article 115, Hizb ut Tahrir’s Draft Constitution of Al-Khilafah)

The Khilafah will therefore stand as a true model of women’s political rights. It will enable them to have full political engagement in the society, which they have been deprived of under dictatorships and other man-made systems in the Muslim world for too long.