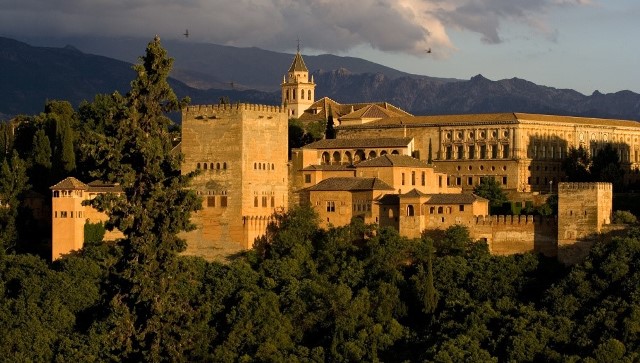 Allah (swt) said: وَمَا أَرْسَلْنَاكَ إِلَّا رَحْمَةً لِلْعَالَمِينَ “And we have not sent you but as a mercy to the world.” [21:107]

Islam came as an address for all humankind, regardless of religion, school of thought, race or gender. In the Khilafah all citizens will enjoy the benefits of the Islamic system and full protection of their lives, property and honour without discrimination.

“All citizens of the Islamic State are entitled to enjoy the Shariah rights and duties.” (Article 5 – Draft Constitution for the Khilafah of Hizb ut Tahrir)

Islam rejects all notions of nationalism, which was central to the development of Western nations. Islam transcends all of this because it defines identity upon the basis of a comprehensive view of the world. This view is based upon an understanding that all of creation is created by a Creator – Allah (swt) – and is subservient to His natural law.

From a societal perspective Islam views all the inhabitants as humans rather than looking at their ethnicities or race. As a result all those who reside in the Islamic territories are viewed as citizens, irrespective of creed, colour or ethnicity.

Citizenship is based on residency rather than birth or marriage. All those who hold citizenship are subjects of the State, their guardianship and the management of their affairs is the duty of the State, without any discrimination. All the people who hold the Islamic citizenship should therefore be treated equally, without any discrimination between them either by the ruler, in terms of looking after their affairs and in terms of protecting their lives, their honour and their wealth, or by the judge in terms of equality and justice.

“All citizens of the State shall be treated equally regardless of religion, race, colour or any other matter. The State is forbidden to discriminate among its citizens in all matters, be it ruling or judicial, or caring of affairs.” (Article 6 – Draft Constitution for the Khilafah of Hizb ut Tahrir)

Citizenship in Islam is based on someone permanently living within the lands of the Khilafah regardless of their ethnicity or creed. It is not a requirement for someone to become Muslim and adopt the values of Islam in order to become a citizen of the state. This is derived from the following hadith. The Prophet ﷺ said: «ادْعُهُمْ إِلَى الْإِسْلَامِ فَإِنْ أَجَابُوكَ فَاقْبَلْ مِنْهُمْ، وَكُفَّ عَنْهُمْ، ثُمَّ ادْعُهُمْ إِلَى التَّحَوُّلِ مِنْ دَارِهِمْ إِلَى دَارِ الْمُهَاجِرِينَ، وَأَعْلِمْهُمْ أَنَّهُمْ إِنْ فَعَلُوا ذَلِكَ أَنَّ لَهُمْ مَا لِلْمُهَاجِرِينَ، وَأَنَّ عَلَيْهِمْ مَا عَلَى الْمُهَاجِرِينَ»  ‘Call them to Islam, and if they agree accept from them and refrain from fighting against them, then call them to move from their land to the land of the Muhajireen (the emigrants), and tell them if they do so, then they will have the rights which the Muhajireen enjoy and they will have duties like the duties upon the Muhajireen.’

The non-Muslim citizens living under the Khilafah are referred to in Shariah, as dhimmi. The term “dhimma,” means “obligation to fulfil a covenant.” Islam has come with several rules pertaining to the people of dhimmah, in which it guaranteed the rights of citizenship for them and imposed upon them its duties. Islam also outlined that the dhimmi enjoy the same justice Muslims enjoy and that they should abide by the same rules which Muslims abide by. As for that which they enjoy in terms of justice and fairness, this is derived from the general command reflected in Allah (swt) saying: وَإِذَا حَكَمْتُم بَيْنَ النَّاسِ أَن تَحْكُمُوا بِالْعَدْلِ “And if you judge between people that you judge with justice.” (4:58) and in His (swt) saying: وَلاَ يَجْرِمَنَّكُمْ شَنَآنُ قَوْمٍ عَلَى أَلاَّ تَعْدِلُواْ اعْدِلُواْ هُوَ أَقْرَبُ لِلتَّقْوَى “And let not the hatred of others to you to make you swerve to wrong and depart from justice. Be just, that is nearer to piety” (5:8) and it is also reflected in Allah (swt) saying regarding the judgement between the People of the Book وَإِنْ حَكَمْتَ فَاحْكُم بَيْنَهُم بِالْقِسْطِ “If you judge, judge with equity between them; for Allah loves those who judge in equity” (5:42).

The State will not interfere with the beliefs or worship of the dhimmi. They will be allowed to adhere to their own laws in matters of marriage and divorce according to their religion. The State will appoint a judge from their own people to settle their disputes based on their religion in courts belonging to the State. The non-Muslims will be treated in matters related to foodstuffs and clothing according to their faith and within the scope of what the Shari’ah rules permit. All the remaining Shari’ah matters and rules, such as: the application of transactions, punishments and evidences (at court), the system of ruling and economics are implemented by the State upon everyone, Muslim and non-Muslim alike. (Article 7, Draft Constitution for the Khilafah of Hizb ut Tahrir). Adam Metz, a Western historian, wrote regarding the Khilafah in the 4th century after Hijra, “…the Islamic state allowed the people of other religious affiliations to use their own courts. What we know about these courts is that they were church courts and prominent spiritual leaders were the chief justices.”

There are many ahadith ordering good treatment of the dhimmi and not abusing them or treating them as second-class citizens. The Messenger of Allah ﷺ said: «أَلَا مَنْ ظَلَمَ مُعَاهِدًا، أَوِ انْتَقَصَهُ، أَوْ كَلَّفَهُ فَوْقَ طَاقَتِهِ، أَوْ أَخَذَ مِنْهُ شَيْئًا بِغَيْرِ طِيبِ نَفْسٍ، فَأَنَا حَجِيجُهُ يَوْمَ الْقِيَامَةِ» “He who harms a person under covenant, or charged him more than he can, I will argue against him on the Day of Judgement.” The classical scholars of Islam also detailed the rights of the Muslims towards the dhimmi. The famous Maliki jurist, Shaha al-Deen al-Qarafi states, “It is the responsibility of the Muslims to the people of the dhimma to care for their weak, fulfil the needs of the poor, feed the hungry, provide clothes, address them politely, and even tolerate their harm even if it was from a neighbour, even though the Muslims would have an upper hand. The Muslims must also advise them sincerely on their affairs and protect them against anyone who tries to hurt them or their family, steal their wealth, or violate their rights.”

The British historian T. W. Arnold in his book, The Preaching of Islam, wrote regarding the treatment of non-Muslims who lived under the Uthmani Khilafah, “…though the Greeks were numerically superior to the Turks in all European provinces of the empire, the religious toleration thus granted them, and the protection of life and property they enjoyed, soon reconciled them to prefer the domination of the Sultan to that of any Christian power”. The English writer, H.G. Wells, wrote the following on the application of justice by the Khilafah: “They established great traditions of just tolerance. They inspire people with a spirit of generosity and tolerance, and are humanitarian and practical. They created a humane community in which it was rare to see cruelty and social injustice, unlike any community that came before it.”

The dhimmi enjoys the same economic benefits as Muslims. They can be employees, establish companies, be partners with Muslims and buy and sell goods. Their wealth is protected and if they are poor and unable to find work they are entitled to state benefits from the Khilafah’s Treasury (Bait ul-Mal).

Non-Muslims are allowed to be members of the Majlis al-Ummah – a body of the state which accounts the Khalifah and represents and expresses the views of the people to him. As members of this body, non-Muslims can voice their complaints in respect to unjust acts performed by the rulers or the misapplication of the Islamic laws upon them or the lack of services or the like. (Article 105, Draft Constitution for the Khilafah of Hizb ut Tahrir)

Historically, the dhimmi prospered within the lands of the Khilafah. The British Jewish historian Cecil Roth mentions that the treatment of the Jews at the hands of the Ottoman State attracted Jews from all over Western Europe. The land of Islam became the land of opportunity. Jewish physicians from the school of Salanca were employed in the service of the Sultan and the Viziers (ministers). In many places glass-making and metalworking were Jewish monopolies, and with their knowledge of foreign languages, they were the greatest competitors of the Venetian traders.

The most misunderstood Islamic taxation is the jizya. Some historians paint a false picture that the jizya tax was so high that dhimmi were forced to convert to Islam to avoid it. Others bring out erroneous arbitrary jizya rates such as 50%.

The obligation of the jizya is derived from the following verse of the Qur’an. Allah (swt) says: قَاتِلُوا الَّذِينَ لَا يُؤْمِنُونَ بِاللَّـهِ وَلَا بِالْيَوْمِ الْآخِرِ وَلَا يُحَرِّمُونَ مَا حَرَّمَ اللَّـهُ وَرَسُولُهُ وَلَا يَدِينُونَ دِينَ الْحَقِّ مِنَ الَّذِينَ أُوتُوا الْكِتَابَ حَتَّىٰ يُعْطُوا الْجِزْيَةَ عَن يَدٍ وَهُمْ صَاغِرُونَ “Fight those who believe not in Allah nor the Last Day, nor hold forbidden that which hath been forbidden by Allah and His Messenger, nor acknowledge the religion of Truth, (even if they are) of the People of the Book, until they pay the Jizyah with willing submission, and feel themselves subdued (saghiroon).”  The ‘subdued’ (sighar) mentioned in this verse means the dhimmi must submit to the rules of Islam. It does not mean physical humiliation.

The jizya tax is applied to all mature, male dhimmi who have the means to pay it. Women and children are exempt as are the poor who have no livelihood. The jizya is applied according to the prosperity of the dhimmi. In the time of ‘Umar ibn al-Khattab (ra) he established three different bands of jizya depending on the prosperity of the person. The jizya rates for different provinces (wilayat) of the Khilafah in the time of ‘Umar ibn al-Khattab (ra) are shown below. 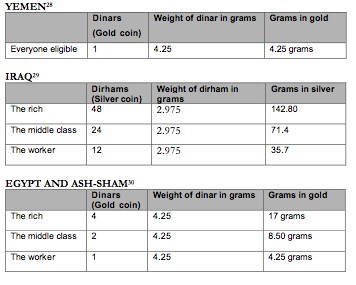 It is forbidden for the Khilafah to overburden the dhimmi with heavy taxation for this would constitute harming them. The Prophet ﷺ said, «أَلَا مَنْ ظَلَمَ مُعَاهِدًا، أَوِ انْتَقَصَهُ، أَوْ كَلَّفَهُ فَوْقَ طَاقَتِهِ، أَوْ أَخَذَ مِنْهُ شَيْئًا بِغَيْرِ طِيبِ نَفْسٍ، فَأَنَا حَجِيجُهُ يَوْمَ الْقِيَامَةِ» “He who harms a person under covenant, or charged him more than he can, I will argue against him on the Day of Judgement.” Umar bin Al Khattab (ra) as Khalifah was brought a huge amount of wealth. Abu Ubayd said, ‘I believe, he said “Of jizya”’ – and he (Umar) said: “I think you must have placed the people in hardship (for such wealth).” They said: “No, by Allah, we did not collect anything that was not given voluntarily and of their own free will.” He said: “Without using the stick and without stringing (them up)?” They said: “Yes.” He said: “Praise be to Allah, who has not caused this to happen at my hands or during my authority.”

“At the time of the Umayyad caliphate, the people of the covenant, Christians, Zoroastrians, Jews, and Sabians, all enjoyed a degree of tolerance that we do not find even today in Christian countries. They were free to practice the rituals of their religion and their churches and temples were preserved. They enjoyed autonomy in that they were subject to the religious laws of the scholars and judges.” (Will Durant, American writer and historian, The Story of Civilization – The Age of Faith)