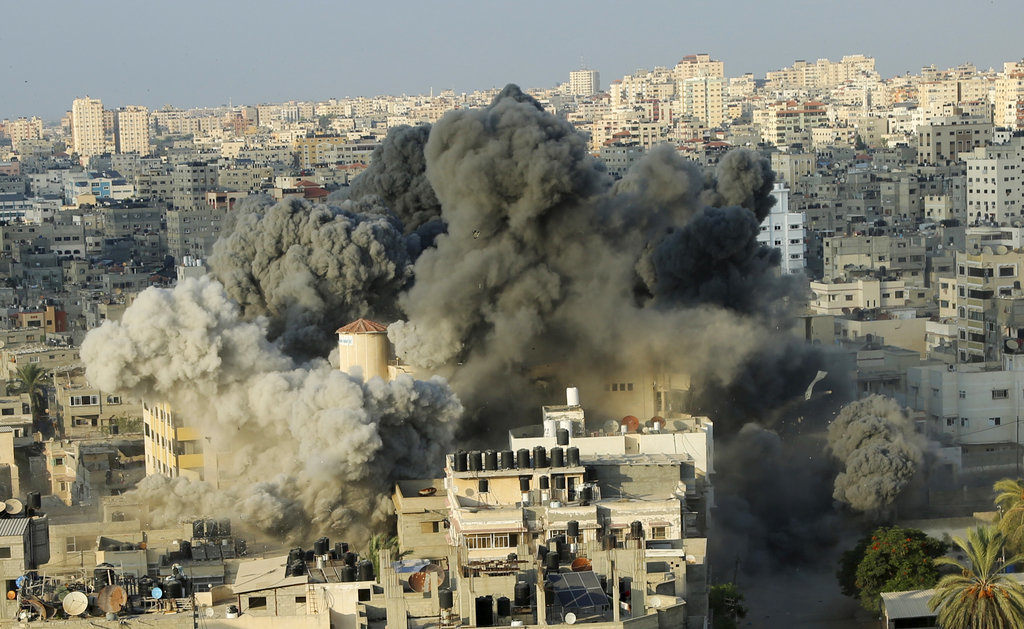 The Muslims of Gaza welcomed Ramadan under a barrage of missiles and airstrikes by the murderous ‘Zionist’ entity. A month that should be a time of celebration, is yet again a time of grief and mourning for families in this besieged land. In a 3-day period, which included the beginning of Ramadan, the brutal Jewish entity pounded the Muslims of Gaza with over 350 airstrikes and artillery attacks, killing around 25 people, including 2 pregnant women and a number of babies and children, and injuring over 150, according to the Palestinian Health Ministry in Gaza. The Ministry of Interior in Gaza said that over 300 structures had been targeted, which included houses, civilian institutions, agricultural lands and infrastructure. At least 130 apartments were completely destroyed, while 700 others were partially damaged, displacing thousands of Palestinian families (Palestinian Ministry of Labour and Housing in Gaza).

Meanwhile in Syria, regime and Russian forces have ferociously intensified their bombardment of the Muslims of Idlib over this last week with relentless airstrikes and the dropping of barrel bombs on homes and hospitals. In, fact the UN stated that this latest deadly onslaught has seen the worst use of barrel bombs by the Assad regime in 15 months. According to the UK based Syrian Observatory for Human Rights, more than 200 have been killed in Idlib since the 20th of April. Health facilities are being systematically targeted, with 12 healthcare centres destroyed in the past 2 weeks. Rescue workers have described it as an, “unprecedented humanitarian catastrophe.” More than 150,000 Muslims have been displaced from the city in the past week alone, trying to flee this campaign of “mass extermination”.

How many more Ramadans must we witness these bloodbaths against our Ummah while the world sits on doing nothing? How much longer are we willing to watch our brothers and sisters in Gaza, Yemen and elsewhere die a slow death due to the crippling blockades which have been imposed upon them and the abysmal inhumane conditions in which they live? How much more of the utter disregard for the lives of Muslims by the UN, the Western powers and regimes of the Muslim world do we need to witness before we realise that hopes can never be placed upon them to defend the blood of the Believers, nor will they ever be part of the solution to these genocide campaigns against our Ummah? The European states are even willing, with no shame, to participate in the ‘Eurovision Song Contest’ being hosted this May by the Jewish occupying entity on land it stole from the people of Palestine, ignoring its massacres against innocents! And how much more are we willing to tolerate of the political games played out upon our lands by the states of the world as they jostle for power and influence, sacrificing the lives of the Muslims in the process of satisfying their greed for the resources and wealth of the Muslim world….before we say…Enough is Enough?!!!

Ramadan as we know used to be a month of great victories for this Ummah and our Deen. The Battle of Badr against the Quraysh, the conquest of Makkah – bringing it under Islamic rule, the Battle of Hitten that led to the liberation of Jerusalem from the clutches of the Christian crusaders, and the Battle of Ain Jalut against the blood-thirsty Mongols which led to occupied Muslim lands being liberated from their rule of terror – are just a few of the historical triumphs of this Ummah in this blessed month. But that which enabled the Muslims to achieve such great victories, as well as to protect the blood of the Believers and liberate Muslim lands was the presence of the System of Allah (swt) which ruled over the Muslim world. It was this system that built, trained, financed and mobilized a formidable army which fought for the interests of Islam and the Muslims, and that made its enemies tremble with fear with the thought of facing its forces, reflecting the words of the Prophet ﷺ, «وَإِنَّمَا الإِمَامُ جُنَّةٌ يُقَاتَلُ مِنْ وَرَائِهِ وَيُتَّقَى بِهِ» “Verily the Imam (the Khalifah) is a shield from behind whom you fight and by whom you are protected”. However, today, in the absence of this true Islamic leadership, the Khilafah (Caliphate) based upon the method of the Prophethood – the Muslim Ummah is a victim of the unscrupulous agendas of foreign nations, and defenseless to attacks, occupation, persecution and oppression.

So this Ramadan, as we witness the heartbreaking scenes of the unimaginable suffering of our brothers and sisters which escalates every single year, we should surely realise that giving charity or making dua alone will not end their nightmare, for what they need is a state that views their blood as sacred as defined by Islam, and that will be their guardian and defender. This is the Khilafah – the shade of Allah (swt) for the oppressed upon this earth.

And as we recite the Qur’an during these blessed days, it should surely invigorate our desire to bring to life in this world the ayaat and words that we are uttering, by working to establish the System of our Rabb (swt) which will implement His every Order, including the protection of our Ummah… so that we are not of those our Rasul ﷺ described when he ﷺ stated, as narrated by Abu Sa’eed Al-Khudri (ra), «يَخْرُجُ نَاسٌ مِنْ قِبَلِ الْمَشْرِقِ يَقْرَءُونَ الْقُرْآنَ لا يُجَاوِزُ تَرَاقِيَهُمْ يَمْرُقُونَ مِنَ الدِّينِ كَمَا يَمْرُقُ السَّهْمُ مِنَ الرَّمِيَّةِ، ثُمَّ لا يَعُودُونَ فِيهِ حَتَّى يَعُودَ السَّهْمُ إِلَى فُوقِهِ» “There will come a people from the east who recite the Quran but it does not go beyond their throats. They will go out of the religion just as an arrow pierces its target and they will not return to it just as the arrow does not return to the bow.” May Allah (swt) protect us from being of such people! Ameen!