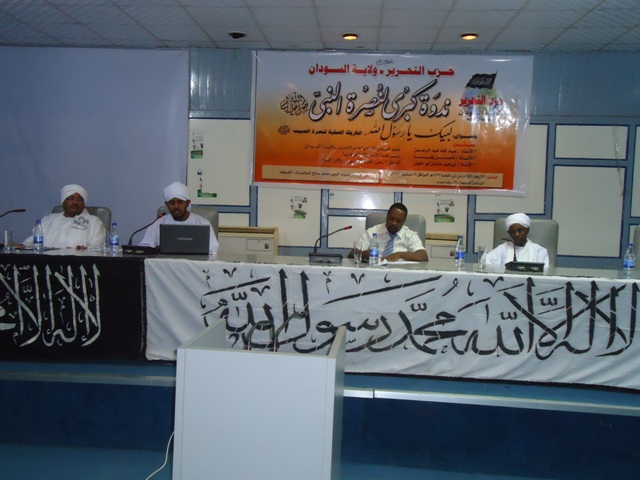 In a statement by Dr. Essam Ahmad Al-Bashir, President of the Islamic Fiqh Council, reported in “Al Mijhar As-Siyasi” Newspaper, Issue No. 1113 on Saturday 4th July, 2015, as saying, “The idea of ​​the Islamic Khilafah State at the moment is impractical; it is not a priority and it is not an obligation on Muslims to follow…”

We in Hizb ut Tahrir / Wilayah of Sudan in the face of this deliberate deception of a man sitting on the presidency of the Islamic Fiqh Council, emphasize the following facts:

First: The obligation of the Khilafah is no longer a subject of dispute between Muslims, since the Khilafah became the demand of the masses of the Ummah, which the Kuffar of the West stand in the way to prevent its establishment by conspiring against the Ummah, and the creation of wars and igniting them, and by trying to tarnish the brilliant image of the Khilafah with whatever means of deception, cunningness, and maliciousness, using the Muslim rulers, who are repressive against the Muslims and humiliate them and engage  with the West in its war on Islam, and they are helped by bad scholars, Sultans’ scholars; who are content with this life instead of the Hereafter, who sold their religion with little dirhams, and perishing posts, and gave false Fatwas,  La Hawla wa La Quwata iIla Billah (No Might and Power except in Allah).

We did not need to write a statement regarding the obligation of the Khilafah if it wasn’t for such words by those who are in the position of knowledge and Scholars. Didn’t the Prophet ﷺ say:

“The one who died without a pledge of allegiance on his neck, has died a death of (the days of) ignorance.”

Second: Is there a revelation after the Prophet ﷺ that was revealed to those who say that this is not the time for the Khilafah?! So when is its time, when it is an absent obligation, and Muslims must work to establish every absent obligation, and especially in the question of the Khilafah. It is by the consensus of the companions (ra), that it is not permissible for Muslims to lodge three nights without a Khilafah, they (ra) delayed the burial of the body of our beloved Prophet ﷺ for this great obligation.

And He سبحانه وتعالى says:

“Indeed this, your religion, is one religion, and I am your Lord, so worship Me”

Fourth: As for the statement that: “the work for Khilafah at the moment is impractical”, what is the standard and reference for it? If the reference and the evidence is Shariah as it should, then this is the time for it because it is absent now; it has filled the corners of history for thirteen centuries, in which the Khilafah was the glory and victory of the Ummah, and it was even the leader of the world, the number one state. Today, it is the vital issue for the Ummah and the Obligation of the era that they should be working for with full speed and maximum power. By the Khilafah the Muslim countries will be united and become Islamic land which implement the laws of Allah and prepares the armies, and opens the countries to spread the guidance and light, and get people out of the darkness of the oppressive capitalism, into the light of Islam and its justice.

Finally we say that the Khilafah will return soon, Allah willing, in spite of the Kuffar and their deceitful and subordinate agents from the sons of the Muslims.