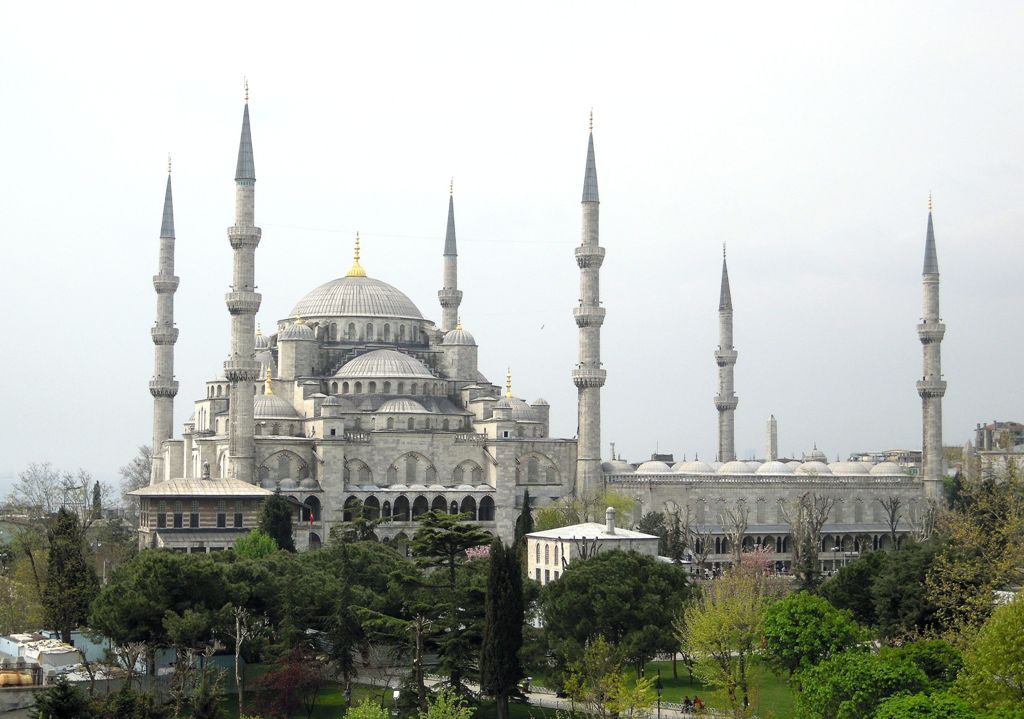 This glad tiding, which informed about the expansion of the Islamic conquests, was achieved in the era of the first Khilafah Rashida (rightly guided caliphate) on the method of Prophethood, and was mentioned at a time when Muslims were besieged in the city facing hardships, fear, hunger and the freezing cold. When the Prophet ﷺ passed away, the Muslims continued the way that the Messenger of Allah ﷺ had drawn for them. The Khalifah (caliph) of the Muslims was their imam, who ruled them by Allah’s law, and led them in Jihad for the sake of Allah (swt), so their armies roamed the wasteland and their boats sailed through the seas to raise the word of Allah and spread justice throughout the world, achieving the glad tidings one after another.

And these days, the memory of the conquest of Constantinople passes by us. It is mentioned in the Hadith:

Ahmad narrated it in his Musnad and Al Hakm in Al-Mustadrak said about: “This is a Sahih hadith on the condition of the two sheikhs and they did not extract it.” As well as in the hadith on authority of Abdullah bin Bishr Al-Khathaami from his father that he heard the Prophet say: «لَتُفْتَحَنَّ الْقُسْطَنْطِينِيَّةُ فَلَنِعْمَ الْأَمِيرُ أَمِيرُهَا وَلَنِعْمَ الْجَيْشُ ذَلِكَ الْجَيْشُ» “You will open Constantinople, its Amir is the best Amir, and the best army is that army.” [Narrated by Ahmad and al-Bazzar].

Let us stop at the glad tiding of the conquering of Constantinople and how the Muslims raced to achieve it, so the first attempts to conquest Constantinople in the year 49 AH, corresponding to the year 669 CE, took place during the era of Muawiyah ibn Abi Sufyan. He sent a massive ground-based military campaign to besiege the city, led by Fadhala bin Ubayd Allah al-Ansari, who penetrated the lands of Byzantine and even reached Chalcedonian near the Roman capital. He spent the winter of that year in the empire’s possession and Muawiyah provided him with supplies and help. These supplies were led by Sufyan bin Auf, who carried out the blockade of the Byzantine capital. [Ibn al-Athir al-Jazari, Abu al-Hasan Ali bin Abi al-Karam al-Shaibani. The Complete History (2nd ed.). Beirut – Lebanon: Lebanese Book House. Page 227.] However, the Muslims did not achieve decisive victories, and they were forced to break the siege and return to Damascus. The companion Abu Ayyub al-Ansari, who accompanied the Fadhala’s army, died in this battle and was buried at the walls of Constantinople. [Ibn Khayyat Al-Leithi, Abu Amr bin Abi Hurairah Khalifa. The investigation of Akram Dhia Al-Omari, publisher. The History of Khalifa Bin Khayat (1st ed.). Najaf Al Ashraf- Iraq. P. 197].

Then the Muslims repeated the attempt to conquer Constantinople during the Khilafah of Sulayman ibn Abd al-Malik in the year 98 AH corresponding to the year 717 CE.

In addition to the aforementioned attempts, a number of other attempts were made that did not reach the city itself but rather reached its suburbs and then turned back. Some historians have put it among the Muslims attempts to conquer Constantinople, including the campaign of the Abbasid caliph Harun al-Rashid to punish the Roman Emperor, Naqfour the first, during which he managed to open Hergla, a suburb of Constantinople. Then there were attempts by the Ottoman State before the reign of Muhammad al-Fatih, but this glad tiding was not fulfilled in those attempts.

On such days, Al-Fatih began invading and besieging Constantinople from the twenty-sixth of Rabi` al-Awwal until it was opened at dawn on the twentieth of Tuesday of this month, Jumada al-Awwal 857 AH; that is, the siege lasted for about two months. When Muhammad Al-Fatih entered the city victoriously he got off his horse and prostrated thanking Allah for this victory and success, and thus this glad tiding was achieved at the hands of this young man, Muhammad Al-Fatih, who was no more than twenty-one years old, but he had been prepared a sound preparation since his childhood; his father Sultan Murad II took care of him, and he was meentored by the finest professors of his era, including Ahmed bin Ismail Al-Kurani, who was mentioned by Al-Suyuti that he was the first teacher of Al-Fatih, and he said about him: “He was a juristic scholar, whose scholars of his time witnessed to his superiority and mastery, they even called him: Abu Hanifa of his time.” Likewise, Sheikh Akshamsuddin Sunqar, who was the first to plant in his mind since his childhood the Hadith of the Messenger of Allah ﷺ on the “conquest of Constantinople”. The boy grew up aiming to achieve that conquest by his hands.

As such were the first Muslims with their caliph and armies. They were racing seriously to strive to fulfill the glad tiding of the Messenger of Allah ﷺ, and such is the greatness of Islam and Muslims when Islam is put into practice in the state and society. Today, who will win the honour to join this honorable list and fulfill the rest of the glad tidings of the Messenger of Allah ﷺ; establishing the Khilafah (caliphate) of Islam, fighting the Jewish entity, and conquering Rome? Will it be achieved by a ruler who seeks contentment and affection from America? Or by a ruler scrambling to win the Jewish affection? Or a tyrannical, oppressive and immoral ruler who does not rule by Allah’s law? Or a ruler who prefers the rules of kufr (Taghout) and Jahiliyah over Allah’s rules, the Lord of the world? Or the agent ruler who has control over the people, who does not observe any kinship or contract with them?

After the demolition of the Ottoman Khilafah (caliphate) on March 3rd, 1924 CE, the Muslim countries became an easy target of the colonial kafir West, so they wreaked havoc on the earth, and destroyed the land and offspring. They divided the Muslim countries into weak states, cardboard entities, and on each entity they appointed a gang of our own people, and spoke in our tongues. They harnessed the country for their masters, beat the faces of the people with a whips like cows tails, recruited armies to protect their chairs, killed many souls, opened large and many prisons, ruined people’s minds with their stinking backward ideas, and created generations that knew nothing but loyalty to the ruling family, the ruling party, or the ruling man.

This is the state of rulers in Muslim countries today, and by Allah we become suspicious of the manhood of our armed forces, and we have become in doubt of their belief and piety, and we have become doubtful about their bravery and nobility. Why are they not moving after all what they saw and heard? What occupies them and prevents them from performing their duties entrusted to them, and their livelihood is taken from the blood and money of Muslims? Woe to them, they angered the Muslims while they were waiting for their intervention in the events to correct them, and they led to the blood clots, strokes, nervous breakdowns, psychological setbacks and all the diseases of depression and sadness awaiting their uprising that topples the thrones of the traitorous rulers! Woe to them, what happened to you, O officers and soldiers? What happened to you, O descendants of Omar and Salahudin? Refute our doubts about your manhood and piety, and do not let us down, shake off the dust of humiliation and debasement, and wipe away from your Ummah the shame of humiliation, weakness and indignity, and hasten to achieve the glad tidings of the Messenger of Allah ﷺ by supporting Hizb ut Tahrir to establish the second Khilafah Rashida (rightly guided caliphate) on the method of Prophethood, that will fight the Jewish entity and conquer Rome.

The establishment of the Khilafah (caliphate) and the liberation of Al-Quds make us in the line of the His chosen worshipers, whom Allah (swt) has assigned before us with this virtue, in which no one matches us and competes in its nobility with us. So it is a great blessing for that army. They will repeat for Islam the days of Al Qadisiyah, battles of Yarmouk, Khaybar’s sword battles, Khalid’s attacks, and Salahudin’s conquests, and the conquests of the Ottoman armies. Blessed is that army that opens Al Quds at the end of time for the second time, and the soldiers with their cannons, planes and tanks of the Khilafah raising the flags of Iman and the banner of Al ‘Uqab, so that Allah(swt) will open more capitals and countries by their hands like Rome, London and Washington, and congratulations to the people of the green more than congratulations to the people of dust. Blessed are they by fulfilling the glad tiding of al-Habib al-Mustafa with the conquest of Rome, according to the narration of Ahmad and others from Abi Qabeel, he said: When we were with Abdullah ibn Amr ibn Al-As, who was asked; which of the two cities will be opened first, Constantinople or Rome?: Abdullah asked for a box, he took out a book from it, and said, Abdullah said: “When we are around the Messenger of Allah ﷺ writing, the Messenger of Allah was asked, which of the two cities will be opened first, Constantinople or Rome?” The Messenger of Allah ﷺ said: «مَدِينَةُ هِرَقْلَ تُفْتَحُ أَوَّلاً، يَعْنِي قُسْطَنْطِينِيَّةَ». “The city of Heraclius will be opened first, meaning Constantinople.”

Blessed are they when the whole world is subjected to the rule of Islam, and it has been proven in the Sahih Hadith that the Prophet ﷺ said: «إِنَّ اللَّهَ زَوَى لِي الْأَرْضَ فَرَأَيْتُ مَشَارِقَهَا وَمَغَارِبَهَا وَإِنَّ أُمَّتِي سَيَبْلُغُ مُلْكُهَا مَا زُوِيَ لِي مِنْهَا» “Allah drew the ends of the world near one another for my sake. And I have seen its eastern and western ends. And the dominion of my Ummah would reach those ends which have been drawn near me”.

What a great glad tiding this is and what a true prophecy, and how wonderful it is for Muslims today to engage in the work that can achieve this glad tiding by their hands. Oh Allah, make us among these people who establish the Khilafah caliphate, liberate Al Quds (Jerusalem), and conquer Rome and all capitals of disbelief. Oh Allah uproot the oppressors – America, the Jewish entity, and the rulers of the Muslims who follow them.