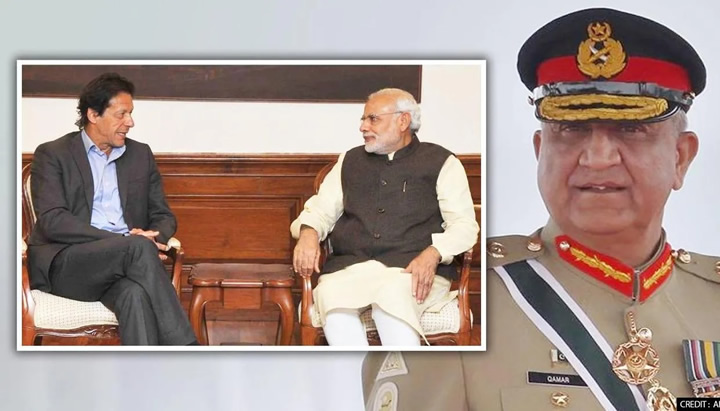 Finally the friendship of the Bajwa-Imran regime with Modi is exposed. Upon the order of Trump previously and now Biden, these traitorous rulers have been working behind the scenes with Modi to bury Occupied Kashmir, even whilst calling Modi a fascist, a Hitler, a bigot and a tyrant. After revelations of a number of back door negotiations, whose occurrence has not been denied by the regime, it is clear that the military and political leadership of Pakistan has abandoned Kashmir. Just as Musharraf tried to barter Kashmir away through Track Two diplomacy, the Bajwa-Imran regime is making attempts to bury Kashmir through secret talks. It proceeds in collaboration with the colonialists, whilst creating an impression that it is all being done for the economic prosperity of our region.

How can this regime deny the co-operation with Modi, when General Bajwa has himself confessed? Despite the forceful annexation of Kashmir by India on 5th August 2019, Bajwa has declared in Islamabad on 18 March 2021, “We feel it is time to bury the past and move forward.” Allah (swt) warned,

“And when they meet those who believe, they say, “We believe”; but when they are alone with their evil ones, they say, “Indeed, we are with you; we were only mockers.”” [Surah Al-Baqarah 2:14].

What deepens the treachery is that instead of liberating Kashmir during the recent Indo-China clashes, assurances were given to India, to the extent that India became fully satisfied of Bajwa’s intentions, moving its first strike corps from the Pakistani border and moved it to the Chinese border for the first time in decades.In order to abandon Kashmir, the Bajwa-Imran regime is resorting to the flawed argument that we have to “fix our own home first.” We ask how can we ever fix our own home first, by implementing the destructive economic policies of the colonialist IMF?

The resolution of Occupied Kashmir can only occur through the path we followed to liberate the part of Kashmir known today as Azad (Liberated) Kashmir. Jihad is the only way to liberate an occupied Islamic land, whilst Pakistan’s armed forces are fully capable of liberating Kashmir through Jihad. We have shown only a glimpse of this capability to the Hindu State in February 2019 so far. However, without a sincere leadership, the bravery and sacrifices of our armed forces demonstrated during every war against India is being wasted. Withdrawal from the Kargil war and the immediate return of captured Indian pilot Abhinandan are just two examples of betrayal by the leadership. How can our brave forces liberate occupied Kashmir when their leadership is in the hands of rulers who took oath to remain loyal with Pakistan, Islam and Muslims, but are actually loyal to the US, capitalism and Biden? O Armed Forces of Pakistan! March towards Srinagar for the pleasure of Allah (swt), removing every obstacle that dares to get in your way. Grant your Nussrah to the Ameer of Hizb ut Tahrir, Sheikh Ata Bin Khalil Abu Al-Rashtah, so that the Second Khilafah Rashidah (Rightly Guided Caliphate) on the Method of Prophethood is established, which will destroy the evil plans of colonialists and their agents, liberating all occupied Muslim lands.