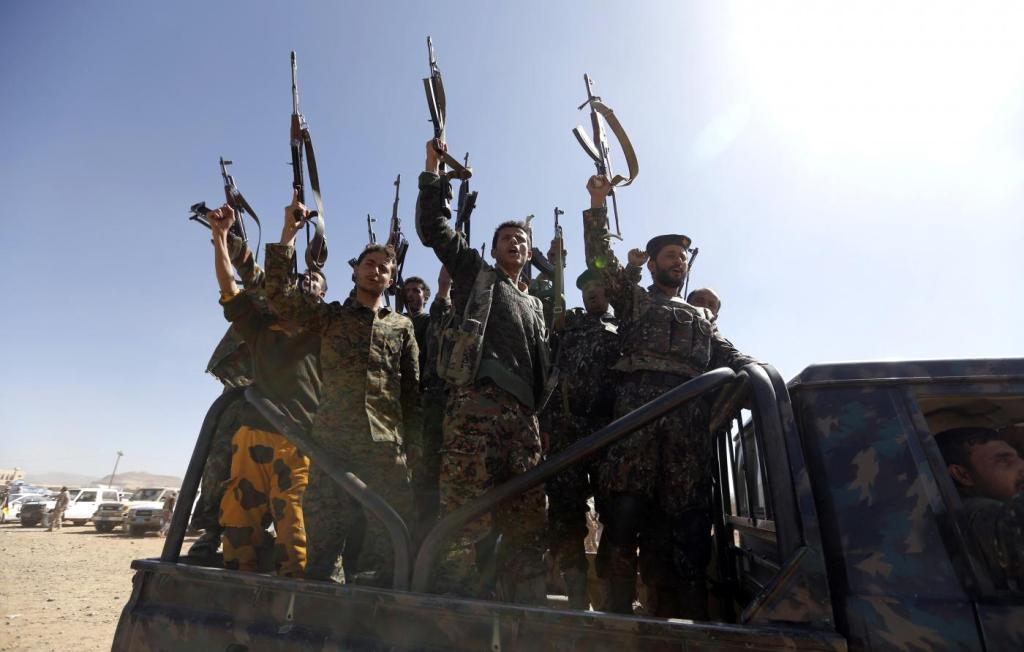 In Return, You Arrest those who Call for the Establishment of the Islamic State from the Members of Hizb ut Tahrir!!!

On 27/3/2020, the Houthis arrested Mr. Abdul Rahman Muhammad Hazaa from a mosque in the capital, Sana’a, in Yemen, after he distributed copies of the speech of the Ameer of Hizb ut Tahrir, the eminent scholar Sheikh Ata’ bin Khalil Abu Al-Rashtah, on the occasion of the ninety-ninth anniversary of the demolition of the Khilafah state (Caliphate) on Rajab 28, 1342 AH, which the Hizb has worked for its return since its foundation in 1953 CE by the great scholar Sheikh Taqiudeen Nabhani, may Allah have mercy on him, and his successor the exemplary scholar Sheikh Abu Yousef, may Allah have mercy on him who have taken the method of the Messenger of Allah ﷺ as a way to establish it by forming a bloc that embodies the Islamic personality in its members, and by the intellectual struggle to displace the ideas of disbelief and its provisions from the lives of Muslims, and to replace them with the ideas and provisions of Islam, and through the political struggle to unveil the plans of the Kuffar against the Muslims, and seeking the Nussrah from the people of power to take over the rule by establishing a Khilafah state to rule with Islam and unite the Muslim lands.

Hizb ut Tahrir persevered around the world, including Yemen, reminding the Muslims of the anniversary of the demolition of their state, to work with it to resume the Islamic life by establishing the Khilafah state.

The Houthis who cracked our heads with their Quranic march and the liberation of Al-Aqsa from the desecration of the Jews, are the ones who ambuscade today those who work for the resumption of the Islamic way of life and establish the Khilafah state, and they also deafened our ears with speaking of their empty cells of political prisoners. Their latest allegations were that they evacuated the inmates out of all prisons for fear for their lives from the Coronavirus, while in fact they are still throwing people in prisons until this moment, and the arrest of the innocent and the injustice that is practiced in and outside the prisons have dire consequences that lead to the loss and destruction of its doers. Allah (swt) says: وَلَا تَحْسَبَنَّ اللَّهَ غَافِلاً عَمَّا يَعْمَلُ الظَّالِمُونَ إِنَّمَا يُؤَخِّرُهُمْ لِيَوْمٍ تَشْخَصُ فِيهِ الْأَبْصَارُ “And do not think that Allah is unaware of what the evildoers are doing: He but grants them respite until the Day when their eyes will stare in horror” [Ibrahim: 42], but know that the members of Hizb ut Tahrir will not be discouraged by the prisons or the terror of the oppressors, as they had faced and still face criminal regimes who were not able to stop this call.

We say to them: O you who claim the Quranic march, what is the accusation and crime made by Abdul Rahman, is it the call to unite Muslims to establish a Khilafah state?! Where is the Qur’an in what you do? Do you not read the verses that oblige political unity on Muslims?! So prepare tomorrow an answer for your crime to the great Lord of the worlds.

We call on the Houthis to release the members of Hizb ut Tahrir, Abd al-Rahman Muhammad Hazza and Abdullah Ahmad Naji, who have been languishing in the prisons of the notorious city of Al-Saleh for nearly three years. We demand that they release them immediately for they had not committed a crime for which they deserve to be imprisoned, and they should kiss the forehead of all those who work day and night and sacrifice all that they have for the sake of establishing the second righteous Khilafah on the method of the Prophethood instead of imprisoning them, in faith of the promise of Allah (swt), وَعَدَ اللَّهُ الَّذِينَ آمَنُوا مِنكُمْ وَعَمِلُوا الصَّالِحَاتِ لَيَسْتَخْلِفَنَّهُمْ فِي الْأَرْضِ “Allah has promised, to those among you who believe and work righteous deeds, that He will, of a surety, grant them in the land, inheritance (of power), as He granted it to those before them” [An-Nur: 55], and the glad-tidings of the Messenger of Allah ﷺ: «…ثُمَّ تَكُونُ خِلَافَةٌ عَلَى مِنْهَاجِ النُّبُوَّةِ» “…and then there will be Khilafah Rashidah on the method of Prophethood”.