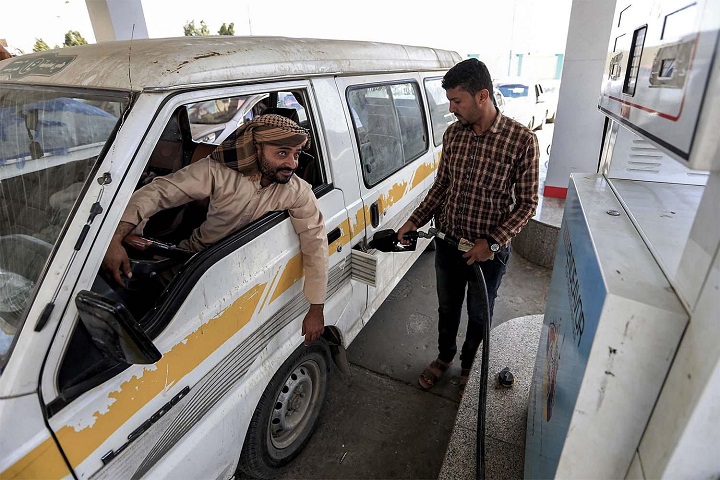 On Thursday, 10/2/2022, people woke up to the price rise of petrol by the Oil Company from 8,500 riyals to 9,900 riyals for a 20-liter tank, despite the fact that the ship’s detention period did not exceed 20 days compared to its predecessors, which exceeded months, with fines added to it on top of the price of oil derivatives. And all of this is a persecution for the people of Yemen who are suffering calamities, with bombardments that disturb their sleep from the coalition’s foolish, and are exhausted by exploitation of their basic needs and rising prices without any mercy. The people of Yemen today are the target to the grudges of enemies from within and from outside, without the slightest mercy or pity.

The official spokesman for the Yemeni Oil Company in Sana’a stated on its official website that: “…the ambulance ship Seadoor loaded with a quantity of 29,480 tons of petrol was tied up at the port of Hodeidah on Sunday, 6/2/2022, after it incurred delay fines due to piracy by the coalition of aggression, and the process of checking and measuring the quantity loaded on board the aforementioned ship is currently underway, in preparation for the start of the pumping process.”

The Houthis organized people’s purchase of petrol from the black-market stations for 11,200 riyals. When they noticed that the people rushed to get fuel at this price, their greed pushed them to make the new increased price, without control or accountability, they exploited the people’s urgent need. We also do not forget to remind you that those who made the deceiving slogan of their revolution, the changing of the prices raised by those who preceded them, which was from 3,500 to 4,000 riyals for a petrol tank, and yet they are the ones who raise its price today to 9900 riyals. The justifications for raising the price of fuel by you or your predecessors does not work, as both of you follow to the directives of the World Bank.

The reality of oil, in relation to the rules of ownership, is that it is a public property, because it is like fire ‘energy’ and water, uncountable (‘idd), that is ever-flowing, and it is one of the many minerals of unlimited amount, it is not permissible to give the privilege of extracting it to individuals or companies. The state extracts, purifies, melts and sells it on behalf of its subjects, and put its revenue in Bait ul Mal (State Treasury). Each member of its subjects has the right to benefit from the public properties and from their revenues, including oil. Oil is from fire, i.e., energy, which the Messenger of Allah (saw), mentioned in his Hadith:

It belongs to all subjects, rich and poor, and not for the West and a handful of Muslim rulers. The state is the one that oversees this property: excavation, extraction, selling, and distributing its revenues to its subjects. From the angle of (whatever leads to a duty becomes a duty) the work to establish the Khilafah (Caliphate) becomes a duty because it is the only reason for application of this. Also, the current fragmentation of the Islamic Ummah is the work of the kaffir West and a handful of rulers to benefit from oil. What is worse is that the harmful states especially in the Gulf and Iran are not satisfied with plundering it and giving it to the enemies of the Ummah, but rather using its revenues to conspire against Muslims. Muslims are deprived of their right from it.  Only the Khilafah State will reject this and will restore the matter to its rightful place on the method of the Prophethood.

What terrible regimes are those that exploit war and peace, and will not spare the slightest effort to exhaust Muslims so that their subservience to other than the authority of Allah remains. The pride of Muslims is only by circumventing the law of their Lord and establishing their state, the second Khilafah Rashidah (rightly-guided Caliphate) State on the method of the Prophethood, that will have a ruler who fears Allah and is feared by the enemies. Islam has an economic system that finds the ideal balance between the individual’s need, the state’s need, and the group’s need; This ensures that the needs of each individual person are satisfied, enables the state to carry out its duties, and achieves security and stability for the society in all fields.

“Then is it the judgement of [the time of] ignorance they desire? But who is better than Allah in judgement for a people who are certain [in faith]” [Al-Ma’ida: 50]