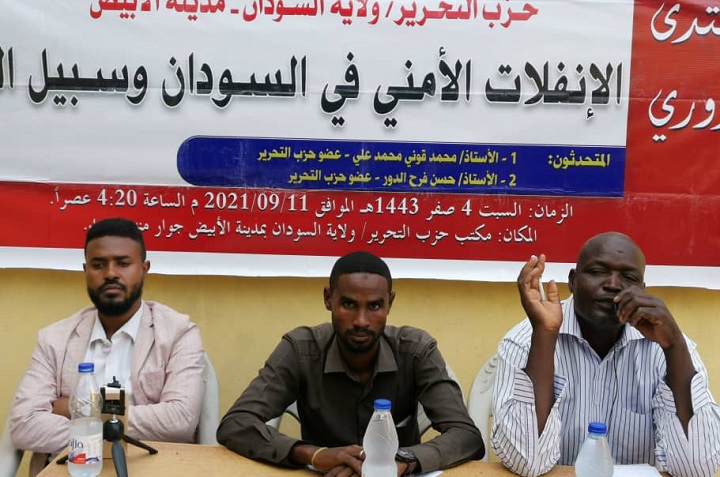 Hizb ut Tahrir / Wilayah Sudan has continued the public actions it holds in the various regions and regions of the country to find a public opinion aware of the provisions of Islam (Ahkam al-Islam) and its solutions related to the different systems of life, which dealt with various topics, including the system of governance in Islam, security breaches, the problem of unemployment, tribal conflicts and others.

“The system of government in Islam is a system of unity and not a federal, imperial or monarchical system.” Under this title, Hizb ut Tahrir / Wilayah Sudan held a political address in the city of El Obeid on September 1, 2021 in front of the Gold Siwar Musala, in which Ustaadh Imam Muhammad spoke, explaining the system of government as a system of unity is based on the verses and hadiths that necessitate the hypothesis of the unity of the caliphate or the imamate and which forbids division and that is due to the multiplicity of the emirate and the authority.

Under the title: “Fighting unemployment and creating job opportunities is the duty of the state,” the Shabab of Hizb ut Tahrir / Wilayah Sudan in Madani locality held a political address at the bus stop of the Great Market on September 7, 2021, in which Ustaadh Ali Siwar spoke, explaining the miserable state that people have reached due to the lack of job opportunities in fact, young people, who are the mainstay of construction, are loitering in the streets and without work!

Hizb ut Tahrir held its monthly forum in the city of El Obeid on September 11, 2021, which was titled: “Security Lawlessness in Sudan and the Path to Salvation!” in which Muhammad Qoni Muhammad and Hassan Farah spoke. The first paper was presented by Mr. Mohamed Qoni, entitled: “The Causes of Security Disruptions in Sudan,” explaining that the first reason is the application of the capitalist principle in Sudan and its loss of the spiritual aspect that makes man work to please the Almighty and makes lawful and unlawful a measure of his actions.

Under the title: “No confederation, no autonomy, no right to self-determination, but a Khilafah Rashidah on the method of the Prophethood to remedy the crisis of governance,” the Shabab of Hizb ut Tahrir / Wilayah Sudan held a public address in the Madani locality at the bus stop of the Great Market on September 14, 2021, in which Mr. Adam Muhammad explaining how the colonial Kaffir tyrannized his tools in the transitional government to divide the rest of the country.

The Shabab of Hizb ut Tahrir / Wilayah Sudan in Omdurman North locality also held a political address on September 14, 2021 entitled: “What is a political party and how does it advance the nation?” Ustaadh Walid Muhammad Ibrahim spoke about the reality of political parties, blocs and movements in the Islamic world and how they emerged.

“Islam and secularism are parallel lines that do not meet” under this title, Hizb ut Tahrir / Wilayah Sudan held in the locality of Omdurman West on September 15, 2021 in the Libya market, a political address in which Professor Ishaq Muhammad Hussein addressed the crowds.

On the same issue of security breaches, the Shabab of Hizb ut Tahrir / Wilayah Sudan held a joint political address in Omdurman North and South localities, entitled: “The phenomenon of security breaches confirms the weakness of the civilian government and the complicity of the military component,” on September 15, 2021 in the popular market Omdurman, in which the Lawyer Ahmed Abkar, who opened his speech with the manifestations of security chaos spread in the capital, represented in theft, kidnapping, looting, threats with knives and others. 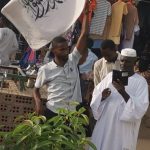 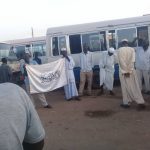 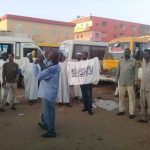 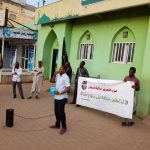 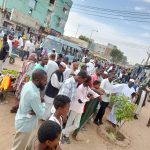 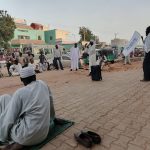 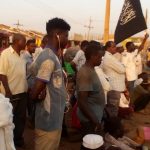 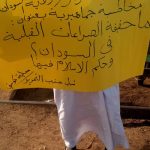 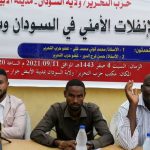