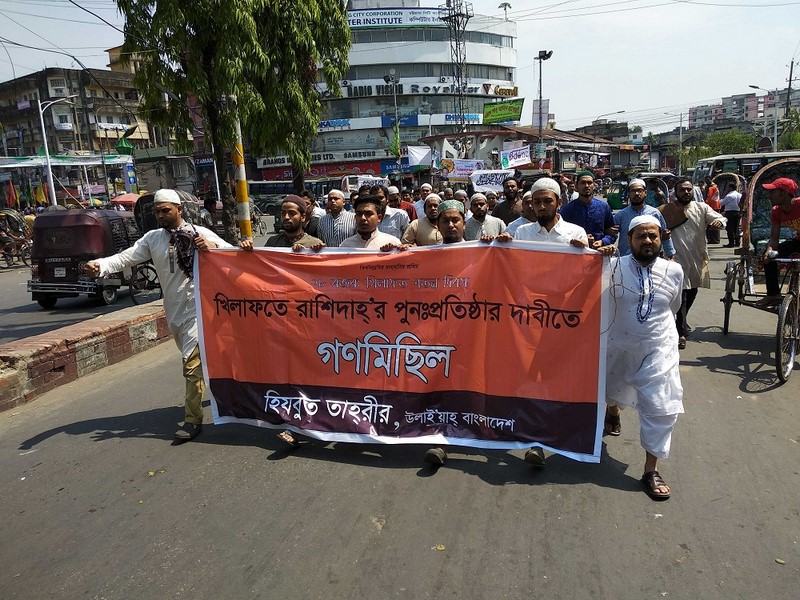 the Kafir Imperialist and their Agents Want to Extinguish the Earnest Demand of the Muslims, the Re-Establishment of the Khilafah (Caliphate), But Allah Will Surely Perfect the Light of His Deen

Commemorating 28th Rajab: The Destruction of the Khilafah (Caliphate) as part of a global campaign, Hizb ut Tahrir / Wilayah Bangladesh, today (13th April, 2018, Friday) as per its previous declaration successfully organized the marches from various important mosques of Dhaka and Chittagong for the demand of the re-establishment of Khilafah Rashidah. After Jummah prayer, with the participation of the activists and supporters of the party and the general people of the community, the marches started from various mosques and then moved toward important roads of Dhaka and Chittagong such as: Shapla Chattar of Motijil, Ittefaq Mor, Dhanmondi 27, Jasimuddin of Uttara, Hazi camp of Airport Railway Station, Rokeya Soroni of Mirpur, New Market of Chittagong, etc., and then peacefully finished the marches. Participants in the marches raised the Shahadah flags high and chanted slogans: “Ummah is Revived – Khilafah is emerging”, “For the demand of Khilafah – come down to the street”, “Woe to democracy – Victory to the people”, “Food, Clothing and Shelter-Khilafah is the Answer”, “Our only way out – Khilafah Khilafah”.

From the fear and to sabotage this march the government cravenly started arresting activists of Hizb ut Tahrir from Wednesday night to spread fear among the members of the party and the people, and like thugs arrested five activists of Hizb ut Tahrir by raiding their houses in the middle of the night, amongst whom are ex-banker, architect, and engineer. They increased the number of police forces in the mosques to increase fear among worshipers, but the Muslims foiling all the evil actions and by following the footsteps of their forefather Hamza, Umar, Ali (ra.) marched bravely and by the will of Allah they were able to successfully finish the programs.

28th Rajab, 1342 AH (3rd March, 1924), the day the Khilafah (Caliphate) was destroyed by the Kafir colonialists and their agent cursed Mustafa Kamal, is the most disgraceful day and the greatest calamity in the Islamic history because the Muslims lost their shield on that day. It was not just a fall of a State, but rather from that day the Muslims lost the practical application of the Quran and the Sunnah, they became fragmented, and they lost their positions of dignity and of being a superpower. After that, the Kafir imperialists attacked us like wolves attack their fallen prey. Our lands have become the target of their greed, exploitation and looting. Our honor is being violated, and our blood has become so cheap that it is being shed relentlessly.

To erase the memory of the Khilafah from the hearts and minds of the Muslims, they divided our body into more than 50 nation states, and they appointed their loyal agents and imposed the curses of secular democracy or monarchy on the Muslims. As a result, widespread corruption, fitna and huge economic disparity have become a regular phenomenon and when people become desperate to liberate themselves from these situations they are supressed with iron fists. The Kafir colonialists and their agent rulers did not stop here, but they resorted to deceptive ways and to run propaganda against the idea of the Khilafah so that the Ummah cannot again stand back on its feet to unite and join together under the leadership of the Khilafah. Despite all these desperate attempts, they could not remove the idea of Khilafah from the hearts and minds of the Islamic Ummah. All of their evil efforts to suppress the will and aspiration of this Ummah to return under the shade of Islamic ruling have failed. The Muslim Ummah has hatefully rejected all other man made systems that were imposed on her. And the re-establishment of the Khilafah on the method of Prophethood has become the only demand of this Ummah. Each of the Muslim lands has become blessed by the advocates of the Khilafah and now the Muslim Ummah is at the door step of the establishment of Khilafah, Insh’Allah. إِنَّ نَصْرَ اللَّهِ قَرِيبٌ “Indeed, the help (victory) of Allah is near”. [Al-Baqara: 214]

The coming Khilafah will bring goodness, pride and dignity for Muslims, and bring humiliation and defeat to the enemies of Islam. When it is established, the occupied Muslim lands will be liberated, the fragmented Muslim Ummah will be united under one State and it will destroy the worldwide colonial aggression and will take the position of a superpower in the world, with Allah’s permission. Furthermore, it is the promise of Allah and the glad tiding of His Messenger ﷺ. Allah will accomplish His promise, and it will be the Khilafah Rashidah (righteous Caliphate) as His Messenger ﷺ gave us tidings to. «ثُمَّ تَكُونُ مُلْكًا جَبْرِيَّةً فَتَكُونُ مَا شَاءَ اللَّهُ أَنْ تَكُونَ ثُمَّ يَرْفَعُهَا إِذَا شَاءَ أَنْ يَرْفَعَهَا ثُمَّ تَكُونُ خِلَافَةً عَلَى مِنْهَاجِ النُّبُوَّةِ ثُمَّ سَكَتَ» “…then Allah (swt) will remove it (Oppressive rule) when He wills, and then there will be Khilafah on the method of Prophethood”. [Ahmad] 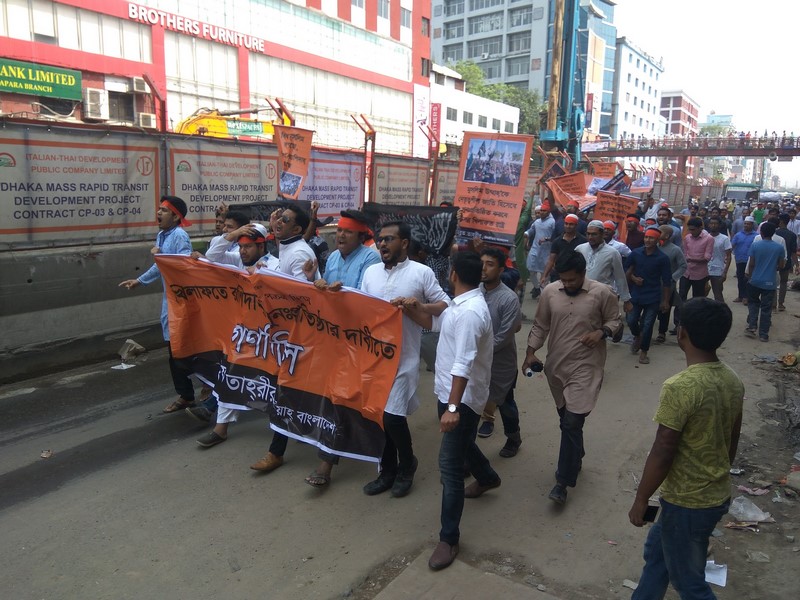 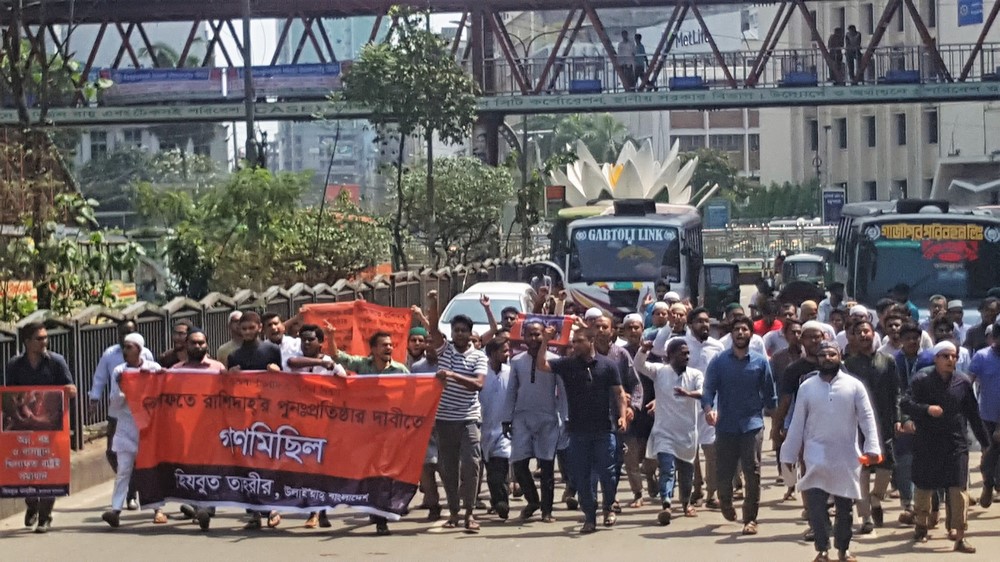 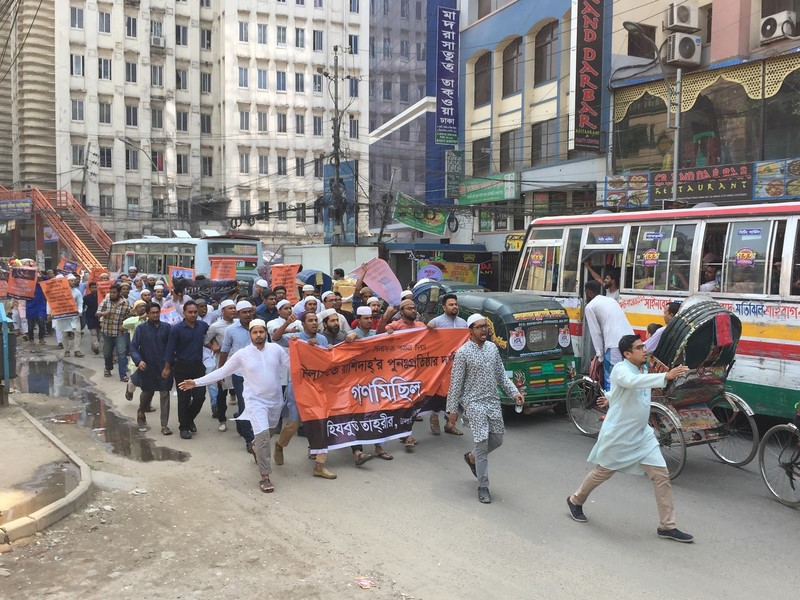 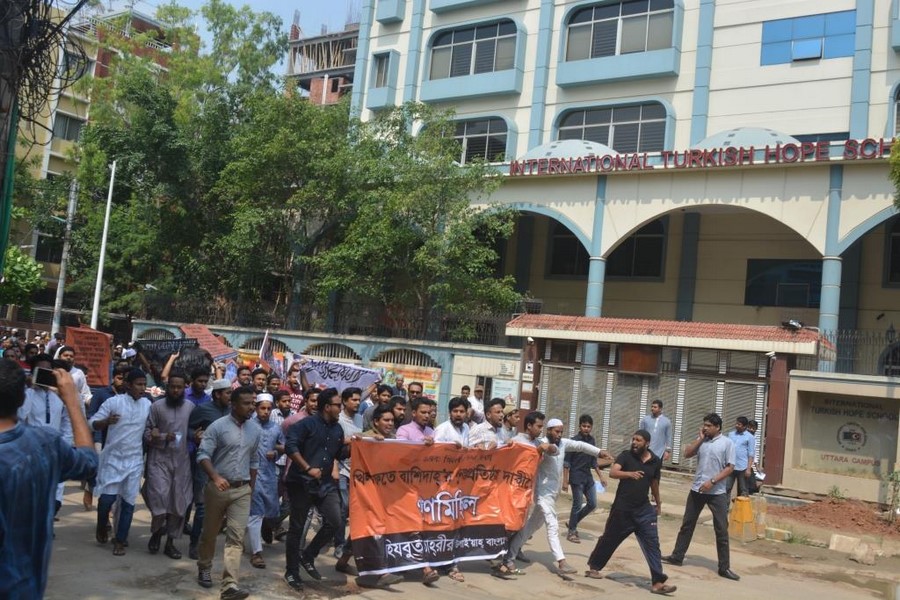