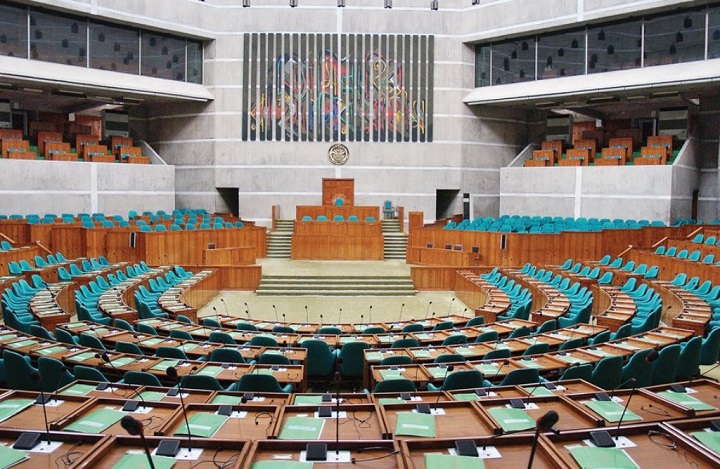 Hizb ut Tahrir / Wilayah Bangladesh strongly condemns Sheikh Hasina’s vain attempt to establish the connection between secularism and Islam, and misguide the Muslims by claiming that Qur’an validates the false secular creed. In her concluding speech in the 11th Parliament session on July 03, 2021, she quoted the ayah of Surah Al-Kafiroon,

“For you is your religion, and for me is my religion”, to take legitimacy for the Kufr secularism. Her fallacious explanation of the ayah in support of secularism is in fact diametrically opposed to what Allah Azza Wa Jal ordains in the Qur’an.

This ayah was revealed when RasulAllah (saw) was asked by the rulers of the Makkah to compromise between Islam and their deen (Kufr). But he (saw) decisively rejected their offer by uttering this Ayah so that the truth could not be mixed with the falsehood. While it is well-known to Muslims that secularism contradicts Islamic Aqeedah and they are demanding Islamic ruling system, Hasina, the guardian of the secular system, is desperate to legalize her ruling by misinterpreting the decisive ayah of the Qur’an. About such deceitful rulers, Allah (swt) has warned us:

“These are they who have purchased misguidance for guidance, so their commerce was profitless. And they were not guided” [Surah Al-Baqarah: 16].

O Hasina! You cannot fool the Ummah with your deceptive words and misinterpretation of the Qur’an, because the Muslims know very well that secularism is separating the ruling of Islam from all of the State’s affairs (economics, foreign affairs, education etc.). Allah says that His (swt) existence cannot be separated from the affairs of the State and society,

“Surely His is the creation and the command” [Surah Al-A’raf: 54]. Then how dare you seek for ‘legitimacy’ from the Quran to disavow Allah from His dominance! Is your holy secularism so much in crisis now that you need Islam and Qur’an to legitimize it?! Heed the warnings of RasulAllah (saw) and repent if you are willing:

“Whoever speaks about the Qur’ān without knowledge, then let him take his seat in the hell fire!” [Tirmidhi].

And, according to you, if there is no contradiction between secularism and Islam, then why you are so afraid of the political messages of Islam? Why are you persistent in suppressing the Islamists and the activists of the non-violent political party Hizb ut Tahrir who calls for the return of the righteous ruling of Islam – the second Khilafah Rashidah (rightly guided Caliphate)? The fact of the matter is that your sanctified secularism is a flawed and contradictory creed in nature. On one hand, it admits that Allah (swt) exists, but on the other hand, it confines His existence to personal belief only, and does not allow Him to interfere in organizing the affairs of the State. This is an absurd and erroneous idea borne out of the womb of the West, and has no root in Islam. If you admit that Allah exists, which is the truth and definitely proven, then He cannot remain in your life as a Creator only while the legislation will be for you and your parliamentarians:

“And whosoever does not judge by what Allah has revealed, such are the Zalimun (oppressor)” [al-Mai’dah:45].

“And whosoever does not judge by all that Allâh has revealed,,such are the Fasikun (Wrongdoer)” [Al Mai’dah: 47].

Thus, we see the flawed secularism produces hypocrites, wrongdoers and oppressors only who use religion to come into power and persecute the Islamic activists after that for their own survival.

O Muslims! These corrupt secular rulers have been tolerated long enough who are forcing us to sideline our Islam to the individual life only, and not letting us return to Islam in its entirety under the shade of the second Khilafah Rashidah. You should work hand-in-hand with the courageous party Hizb ut Tahrir more passionately for the imminent return of the second Khilafah Rashidah. Only the Khilafah has the ability to unify people of all religion, race and creed including even the atheists. The upcoming Khilafah state will treat all its citizen as human just as accommodated people of all kinds for over thirteen centuries. Hizb ut Tahrir clearly states in its draft constitution how the guardianship and management of the affairs of her citizens by the Khilafah State will ensure justice and protection of the lives, wealth and honor of all her subjects: “All citizens of the State shall be treated equally regardless of religion, race, colour or any other matter. The State is forbidden to discriminate among its citizens in all matters, be it ruling or judicial, or caring of affairs” (Article 6 – Draft Constitution for the Khilafah of Hizb ut Tahrir).