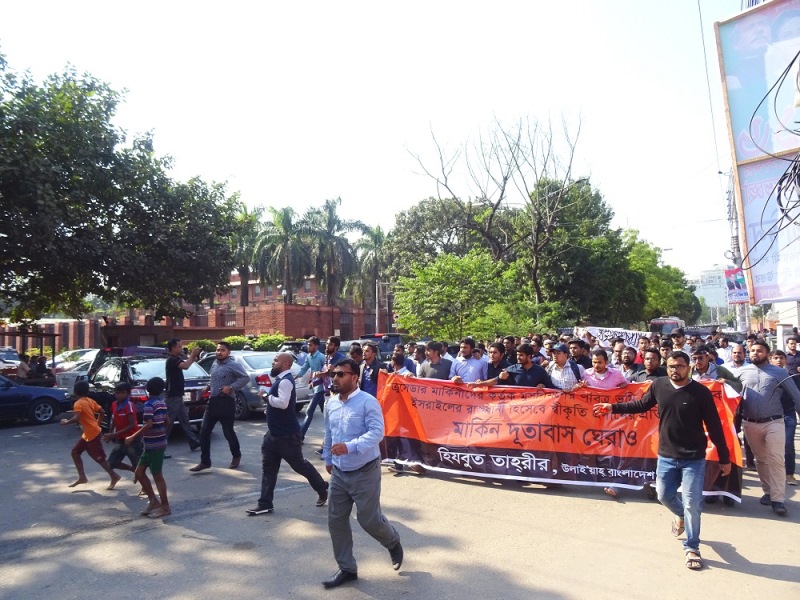 Today, (Tuesday, 12 December, 2017) at 11am Hizb ut Tahrir / Wilayah Bangladesh organized a march towards the American Embassy in Dhaka (Markin Dutabash Gharao) to protest against the formal recognition of Jerusalem as the capital of Zionist Israel by crusader America. Around half a thousand protesters attended in this march. They started their march from Guslhan 2 Circle and raised high the Shahadah flags. After that, in an eye catching display of the highest level of love for the blessed land of Al-Quds they advanced towards Madani Avenue, the location of the US Embassy, chanting “Allahu Akbar, Allahu Akbar; La ilaha illallahu Muhammadur RasulAllah; Death to America; No to American presence in Bangladesh, Liberate Jerusalem, Establish the Khilafah,” etc. After reaching near US Embassy, they burnt the US and Israel’s flags and express their rage, and finished their program in a non-violent way. Hizb ut Tahrir / Wilayah Bangladesh organized this activity from its sense of responsibility towards Jerusalem, which is the land of Isra and Mi’raj, the first Qibla of the Muslims, and where the third of the three mosques that Muslims travel to; as, Hizb ut Tahrir is the sincere and aware leadership of the Ummah that represents and expresses the thoughts and feelings of the Ummah.

Hizb ut Tahrir / Wilayah Bangladesh and 160 million Muslims in Bangladesh strongly condemned the treacherous rulers of the Arab and Muslim world, who gave birth to the likes of Trump who dared to play with the sentiments of the Muslims regarding the blessed land of Al-Quds. Since the occupation of Al-Quds in 1948, all these impotent sell-outs have been doing is fooling the Muslims with their empty, fiery speeches and condemnations that have no effect whatsoever.

Hizb ut Tahrir / Wilayah Bangladesh and the Muslims in Bangladesh hatefully reject Hasina’s ineffective protest rhetoric against Trump’s declaration about Jerusalem. Because, the true reality is that the Hasina regime is the agent of US-Britain-India, and it is maintaining all sorts of friendly relations with the Crusader America. Even her government is involved in heinous collaboration with US to establish dominance over our Military in the name of diplomatic and military relations. Strategic dialogue between the Hasina government and US is nothing more than an avenue for America to plot against Islam and the Muslims of Bangladesh.

Hizb ut Tahrir / Wilayah Bangladesh will undertake a sustained political campaign against the American domination over the Islamic land of Bangladesh on the basis of the following demands:

In order to materialize these demands we, Hizb ut Tahrir / Wilayah Bangladesh, will step up our efforts to re-establish the Khilafah Rashidah (rightly guided Caliphate) which is the only state that will stand up for the cause of Islam, the Muslim Ummah and her blessed land. Take heed of our calls, O Muslim! Al-Quds will be the future capital of the Khilafah as promised by our beloved Prophet Muhammad ﷺ. So, we urge you to fulfil your duty by striving hard with Hizb ut Tahrir to bring back the mighty second righteous Khilafah.

We want to remind the Muslims Army of Bangladesh that Al-Quds is the land opened by the Khalifah Umar (ra), which was again rescued by the great Salauddin al Ayyubi (r) from the hands of the crusaders. This land is the Amanah for the Muslims across the globe. To protect of this Amanah and true love for the sanctity of Al-Quds means to liberate the whole of Palestine with its Al-Quds from the occupation of the Zionists. In this purpose, give Nusrah to Hizb ut Tahrir to establish Khilafah Rashidah. Only the Khilafah will mobilize you to liberate Al-Quds, to fight the Jewish entity and break their back with your hands, insha’Allah.

“Allah will punish them by your hands and will disgrace them and give you victory over them and satisfy the breasts of a believing people.” 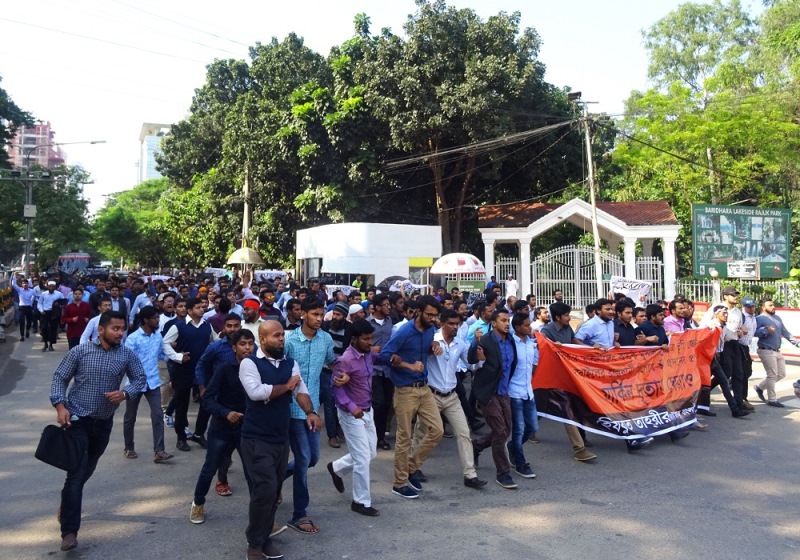