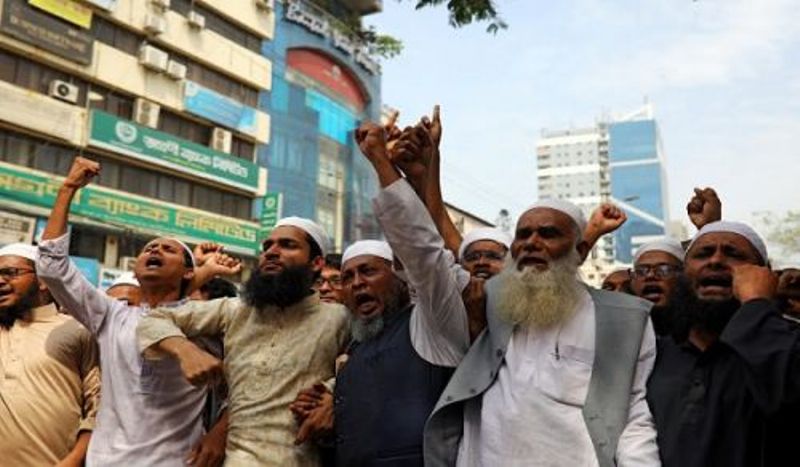 Hizb ut Tahrir in Wilayah Bangladesh, today, on Friday (15/03/19) after Asr prayer organized protests in front of various mosques in Dhaka and Chittagong against the massacre of Muslims in New Zealand. A horrifying mass shooting targeting Jum’ah Salat at two mosques in Christchurch, New Zealand by an anti-Muslim terrorist has killed at least 49 Muslims and wounded at least 48. Innalillahi wa inna ilaihi raji’un. We strongly condemn such heinous action, and our du’a is with the victims and their families.

The speakers in the protests said: “Let us not forget that today’s atrocious crime is the direct result of decades of ‘hate and fear mongering’ against the Muslims by the colonial West and their rotten media under the pretext of “War on Terror” (aka War on Islam). When Anti-Muslim fear-mongering is highly endorsed by the secular Western politicians, this level of massacre is bound to take place. In the absence of the true guardianship of the Muslims, we are now feeling totally helpless against Western barbarism. On one hand, the secular West has brought havoc in Muslims’ own lands by their awful military ‘interventions’ (occupations), and, on the other hand, the anti-Muslim hysteria is driving their local populations to be violent against Muslims. When it comes to safeguarding the Muslims residing in their lands, the pathetic Western nations do not even feel ashamed of their insincerity to offer protection to the Muslims by upholding their so-called secular value of “Freedom of Religion”. And this is what we saw – that, instead of assuring the Muslims about their safety after this Friday tragedy, the New Zealand police rather warned them not to visit mosques “anywhere in New Zealand”!

The speaker also said: “Furthermore, let us not forget that traitorous nation-state rulers of the Islamic lands are also the ‘partners in crime’ for whom Muslims are in this miserable state. They are the ones who paved the way for Western ‘interventions’ into the Muslim lands, and also due to the inaction of these treacherous and spineless rulers, the hate and fear-mongering against the Muslims are on rise in the Western world. These pathetic rulers do not view the crisis of the Ummah as a unitary problem, rather they view it from a “narrow nationalist frame” and their own self-interest due to which this unacceptable Western hegemony and anti-Muslim hysteria goes unchallenged.”

Hizb ut Tahrir / Wilayah Bangladesh, wants to remind the Muslims once again that without the shade of the Khilafah Rashidah (rightly guided Caliphate), Muslims all across the globe, be it in Bangladesh or any other part of the Western world, will be in this state of wretchedness and anxiety. Western secular democracy has already brought mayhem in the Muslim lands either through their direct ‘intervention’ or puppet rulers, and now the Muslims living in the West are becoming the sad victims of their propagated anti-Muslim bigotry. Unless we come forward to uproot secular democracy along with the agents imposed on us as rulers in the Muslim world, the honor and sanctity of the blood of this blessed Ummah cannot be protected from the colonial West. «إِنَّمَا الإِمَامُ جُنَّةٌ يُقَاتَلُ مِنْ وَرَائِهِ وَيُتَّقَى بِهِ» “Only the Imam is a shield, behind whom you fight and you protect yourself with.” (Muslim)