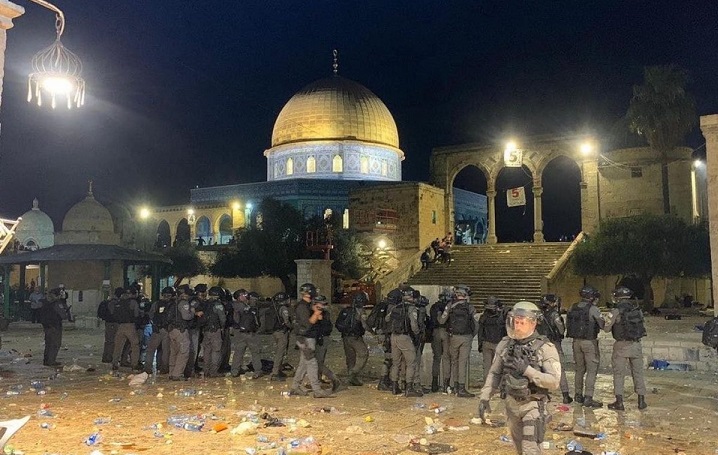 Again the Jewish occupation forces have violated the sanctity of Al-Aqsa, the first Qibla of Islam. They stormed Masjid Al-Aqsa, threw sound grenades and gas canisters to disperse the worshipers who gathered on the occasion of blessed night of Al-Qadar, resulting in the injury of more than 300 people of whom many are in critical condition. Their brutality did not stop there, as they were seeking to empty the masjid of those making ‘itikaaf’. Surely this aggression is not just an aggression against Al-Quds and the Muslims of Palestine, but rather is against all of the Muslims Ummah; this is reflected in the protest of Muslims worldwide. It was also reflected in the protests organized by Hizb ut Tahrir / Wilayah Bangladesh in front of different mosques in Dhaka.

In the protests organized by Hizb ut Tahrir / Wilayah Bangladesh, the speakers said that the criminal negligence and silence of the treacherous regimes of the Muslim world encourage the Jewish entity to commit its crimes and show its audacity. The Jewish entity is well aware that these rulers will not respond in the cries of Al-Aqsa, like the way they responded to America to normalize relationship with the usurper Jewish entity. It is also aware that the so-called condemnations and threats of Erdogan and Imran Khan, along with that of the other agent Muslim rulers will never be translated into an effective military strike, by which each inch of the blessed land of Al-Quds along with the Masjid Al-Aqsa can be liberated. The deception of these rulers are not limited this; they are again misguiding the Muslims by urging the colonialist International Community and UN Security Council to solve this crisis; whereas, this very International Community installed this Jewish entity in the heart of Muslim Ummah like a dagger. It is this International Community who perused the Arab countries along with all other the countries to normalize relationship with this illegal entity in the name of the so called “Deal of the Century”.

The speakers urged the Muslims by saying: The only appropriate response is mobilizing the willing and capable Muslim armies to uproot this monstrous entity from its roots. Anything less than this only means that Al-Aqsa will continue to scream, be defiled and stormed, whilst Al-Quds and Palestine will remain under the yoke of occupation. And the only obstacle in this path are the agent rulers who have shackled our armed forces in the barracks. So, we need to remove them and establish the Khilafah Rashidah (rightly guided Caliphate), which will order the Muslim armies to march to liberate not only Palestine, but also Kashmir and all other occupied lands.

The speakers ended by urging the sincere officers in the military: O sons of Salahudin (ra) in the Ummah’s armies and in the command of the troops that recruit, train and lead them, stop being submissive before the weak conspiring regimes. Mobilize now for the Nusrah (material support) for your Deen, the blessed destination of the Isra’a of your Prophet (saw) and your fist Qiblah.

Mobilize and uproot all the treacherous regimes that stand in your way and give Nusrah to Hizb ut Tahrir for re-establishment of the Khilafah Rashidah that will send you to expeditions of liberation. By Allah (swt), if you mobilize with sincere intention and upon firm resolve, Allah (swt) Himself will advance you in this. And Allah (swt) is with you and will never waste to your deeds.

“O believers! What is the matter with you that when you are asked to march forth in the cause of Allah, you cling firmly to your land? Do you prefer the life of this world over the Hereafter? The enjoyment of this worldly life is insignificant compared to that of the Hereafter- If you do not march forth, He will afflict you with a painful torment and replace you with other people. You are not harming Him in the least. And Allah is Most Capable of everything.” [Surah At-Tawba 9:38-39]