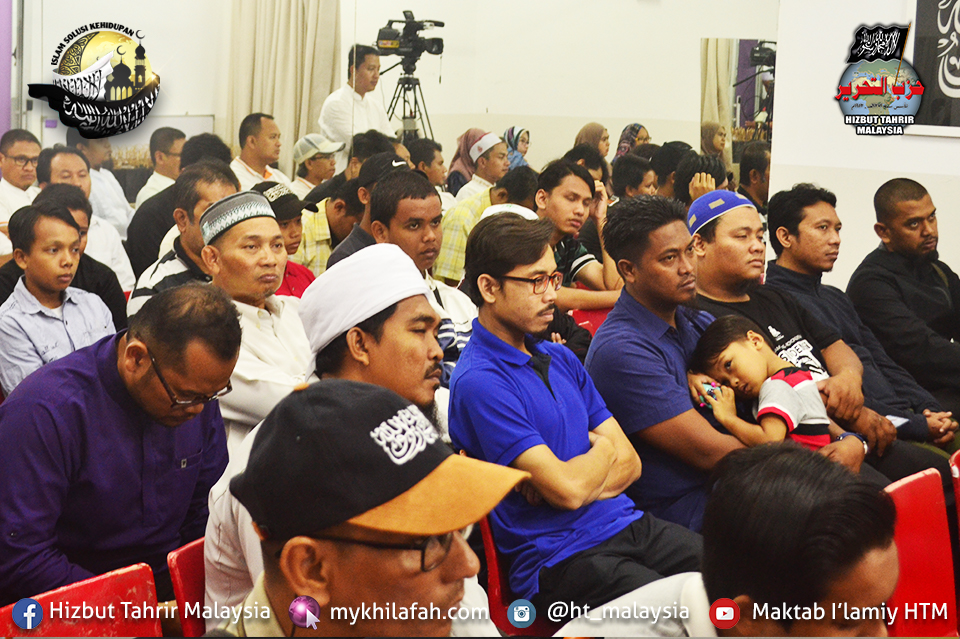 Kuala Lumpur – Hizb ut Tahrir / Malaysia (HTM) has hosted an open forum entitled “Islamic Life Solutions”, located at the Khilafah Center, Kuala Lumpur. The forum explores the role and position of Islam as a mabda ‘(ideology) revealed as the solution to human life.

The ceremony was opened with welcoming remarks and recitation of Quranic verses, before being escorted by Brother Uda As as moderator to start a forum that featured two HTM central leaders, Brother Barakath and Brother Mus’ab as panel members. In the forum, the two panelists discussed the reality of what is happening in the country under the Pakatan Harapan government administration and the implications of implementing its policies, including the Islamic position in the country.

Comment:
Generally the people evaluate the performance of the Pakatan Harapan (PH) government based on two things. First, how far the PH government is better than the previous Barisan Nasional (BN) government. Secondly, the extent to which the 14th General Election manifesto was fulfilled. Apparently, after 1 year of PH rule, things did not get so bad that the people made the 14th general election manifestly backfire on them.

Although there was a major change after the GE14, the change was on the ruling party but the ruling system remained the same. This is just the first time the government has changed, so the people have high expectations. In Malaysia, Malay people are often associated with Islam. So when the position or interests of the Malays are threatened or threatened, they are often associated with threats to Islam. This is a way of evaluating for most Malaysians. In fact, no matter what the nation of Muslims is, their lives will be at stake if their life is not organized in accordance with Islamic teachings. It turns out that in Malaysia it is still governed by rules not derived from Islamic teachings. So the damage to life is definitely getting longer and longer.

The application of Islamic teachings to his death has been practiced since the Islamic State (Medina) was first founded by the Messenger of Allah (saw) until it was collapsed by British knot Mustafa Kamel. So the glory and prosperity of human life regardless of race and religion has been lost in history. In fact, many western scholars have acknowledged that civilization and the prosperity of life were highest during the reign of the Caliphate.

The effects of western colonialism and the continuing efforts to keep Muslims away from the true teachings of Islam caused the Muslim mind to remain colonized so that its thinking could not be free from the concept of nation state. Muslims were brutally murdered in Palestine, their solution referred to the PBB, appeals to the PBB. Despite the fact that the PBB created the “Israel” illegitimate country. Likewise, the highest law practiced in Malaysia today is the law envisaged by the British occupiers. So anything including how to practice the Islamic teachings contained in the Quran must conform to the constitution of this British creation. So when the Prophet (saw) was insulted, Muslims could only protest against the existing constitution. While Islamic teachings say that the insult of the Prophet (saw) was a suicide. As well as other Islamic jurisprudence laws, everything must be in accordance with the constitution.

So talking about the caliphate system of the Islamic system is a huge undertaking, there is definitely a movement to implement it. In Malaysia in particular, Hizb ut Tahrir / Malaysia has been vocal about the caliphate system. The struggle of HT is based on the methodology shown by the Messenger of Allah. HT examines each of the ways in which the Messenger of Allah (Muhammad (saw)) has done in establishing Islam in Medina. Preaching is done by changing the mindset and feeling of the people so that the teachings of Islam can be fully implemented by establishing the Islamic system of caliphate.