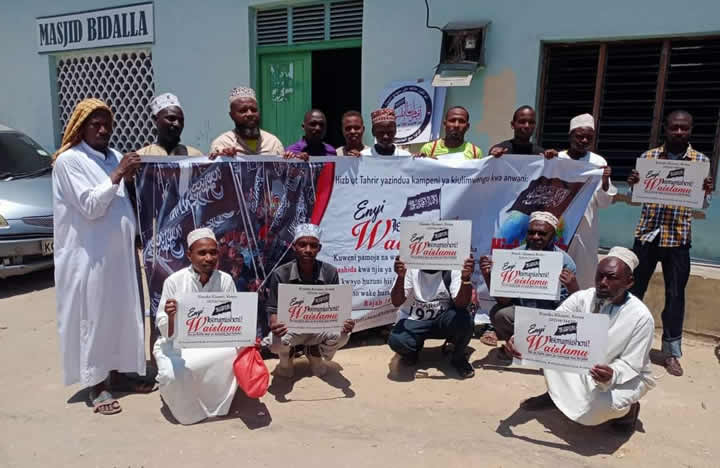 With the direction of the Ameer of Hizb ut Tahrir Eminent Scholar Ata Bin Khalil Abu al-Rashtah, may Almighty Allah protect him, Hizb ut Tahrir / Kenya successfully concluded a global campaigning that marked the 100 years in the Hijri calendar since the destruction of the Khilafah State (Caliphate), 28 Rajab Muharram 1442 AH / 2021 CE.

Hizb ut Tahrir / Kenya was able to conduct picketing after Jumua’ prayers for the four weeks of the holy month of Rajab. This was done in mainly in coastal towns of Mombasa, Malindi, Shimoni and LungaLunga. In capital Nairobi, the Picketing was conducted at Jamia Mosque, Eastleigh, Huruma and Majengo. In the first Picketing, a press release entitled: “Since the Destruction of the Khilafah, Demolition of Houses of Worship has become a Tragedy to the entire Muslims” was distributed all coastal regions as well as Nairobi. And on the third week, an article entitled: “Muslim Ummah can never be defeated by her enemies”.

The campaign also comprised series of public talks in different mosques along with cards distribution carrying the message of the glory of the Khilafah, the impact of its absence, the obligation to its reestablishment and its return. On March 10, 2021 Radio Rahma hosted Ustadh Shabani Mwalimu – Media Representative of Hizb ut Tahrir/ Kenya in a one-hour live talk show where he talked about The Glad Tidings of the Return of the Khilafah Series of streets walking and visits to prominent and influential people were made to remind them the public their constructive role to play towards the noble task of reestablishment of the Khilafah.

These activities were a part of a global campaign carried out by the sincere Shabab and Shababat of Hizb ut Tahrir all over the world in the month of Rajab Muharram of this year 1442 AH – 2021 CE. This was to remind the Ummah the centenary of the sorrowful event of the abolition of the Unique Islamic System Governance established by the Master of the Messengers Muhammad, may Allah bless him and grant him peace, (the Caliphate) that illuminated the corners of the world over the course of 13 centuries.

We ask Allah Subhanahu wa Taa’la to hasten the establishment of the Khilafah Rashidah (rightly guided Caliphate) upon the method of the Prophethood for us, and that is no great matter for Allah. He (swt) says,