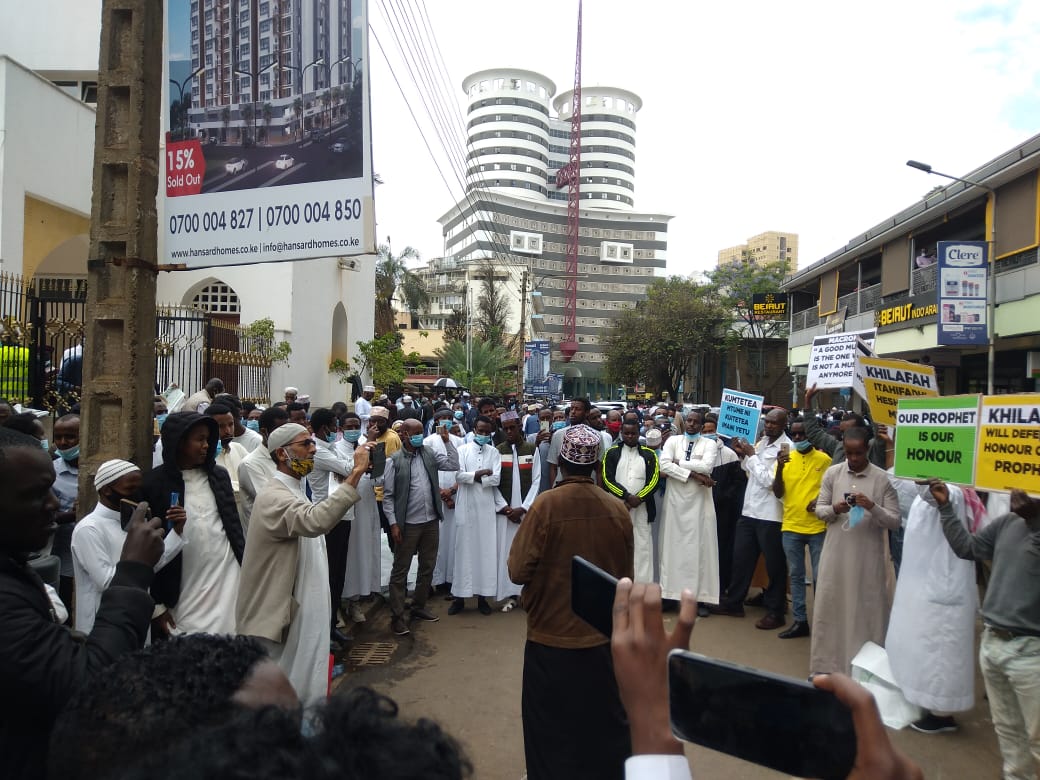 On Friday 30th October 2020, members of Hizb ut Tahrir/ Kenya held a series of picketing in support of Prophet Muhammad, may Allah bless him and grant him peace. The picketing was conducted after Jumua prayers in main cities of Nairobi and Mombasa as well other coastal towns.

During the picketing, the members of Hizb ut Tahrir raised banners and posters reading:

Khilafah: Defending Our Prophet is defending our Faith

Khilafah will defend the Honor of Our Prophet

The picketing was organised in protest against the recent anti-Islamic remarks by the French President Emanuel Macron disparaging Islam and its sanctities as well as supporting the mockery caricature against the noble Messenger ﷺ. The speakers unpacked the whole kufr concept of freedom of expression in which, Marcron and his comrades support their fanatics to spread hatred againts Muslims and their sanctities.

Freedom of speech which has been made by capitalists as a universal idea, meaning that man has a right to express and advocate openly any opinion on anything or issue without limitations. So the recent defamation of Prophet ﷺ by a French teacher Samuel Paty was supported by all the Western leaders, ‘the defenders of freedom of expression’. Ironically, the same leaders have set up draconian laws and policies to silence Muslims and movements that oppose political, economic and social oppression. Consequently, those calling to the concepts ideas of re-establishment of Khilafah (Caliphate) and other Islamic ideas are branded as extremists!

Anas Bin Malik (ra) reported that the Prophet ﷺ said: «لَا يُؤْمِنُ أَحَدُكُمْ حَتَّى أَكُونَ أَحَبَّ إِلَيْهِ مِنْ وَلَدِهِ وَوَالِدِهِ وَالنَّاسِ أَجْمَعِينَ» “None of you will have faith till he loves me more than his children, his father and all humankind.”

Hizb ut Tahrir / Kenya reiterated in the protest that it is only the Khilafah that will protect and defend the honor of the Noble Messenger ﷺ.