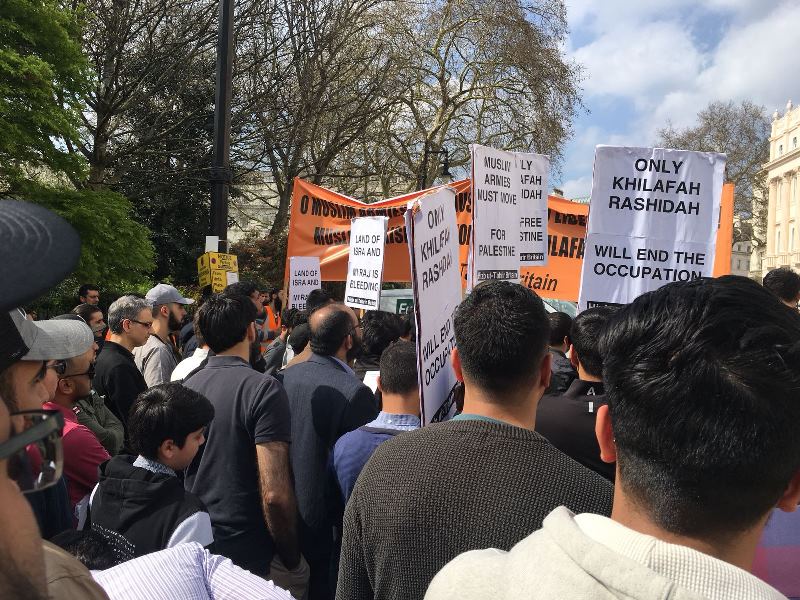 Today on the 28th Rajab 1439 AH, we remember that the last Khaleefah was deposed in Istanbul by the traitor Mustafa Kemal. The Ottoman Caliphate (Uthmani Khilafah) was the Islamic State at the time, which had been brutally carved up and finally destroyed at the hands of the jealous British colonialists.

Yesterday on the 27th Rajab, the anniversary of the night journey of the Prophet ﷺ from Makkah to Al-Quds and his ascent into the heavens, Hizb ut Tahrir Britain organised a demonstration in front of the Turkish Embassy in London. The demonstration was attended many Muslims who wanted to expose the secular Turkish state, and in particular its President Rajab Tayyib Erdogan, as a traitorous regime, serving the interests of the colonialists at the expense of the Muslim Ummah.

The speakers at the demonstration particularly focused on the case of Palestine, where illegal occupation is now considered a right by the unjust people in the world, while Muslims who call upon the Muslim armies to liberate this blessed land, are accused of extremism and even terrorism. The speakers showed how the issue of Palestine is not a matter for Palestinians or Arabs alone, nor a matter of human rights or UN resolution violations. Rather, it is an Islamic issue for all Muslims to take seriously, because Allah (swt) linked this land to our Aqeedah and made it a duty on the capable Muslims to liberate it.

It was on the 27th Rajab that Salahuddin finally entered Al-Quds, after 100 years of bloody crusader occupation. When the Khilafah took over the rule there again, it again became a place of peace and worship, as Muslims and non-Muslims lived together as citizens of the Islamic State. This fact should be a source of hope that Allah’s victory in liberating Palestine from the illegal and oppressive Zionist occupation is very close.

The speakers also drew attention to the treachery of President Erdogan and his secular regime, who have gone to great lengths to strengthen economic ties and military cooperation with the Jewish entity. Despite the deceptive use of Islamic slogans, Erdogan is assisting the Jewish occupiers in their crimes, just as he is assisting the Syrian Butcher Assad in helping him secure his tyrannical rule. He does do all this in loyal service to the colonialists, while completely neglecting the affairs of the Muslims and the commandments of Allah.

The demonstrators chanted calls upon the Muslim armies to move to liberate Palestine, and called upon Muslims to reject the hypocrisy of Erdogan and other rulers in Muslim lands who trade and kill to protect the colonial hegemony, and in support of the Jewish entity’s occupation. The demonstration ended with a call upon the attendees and those hearing about the demonstration on social media to stand up for the truth in Palestine, just as Abu Bakr As-Siddiq stood up for the truth of the Isra of Muhammad ﷺ, even though the Quraysh mocked him for it.