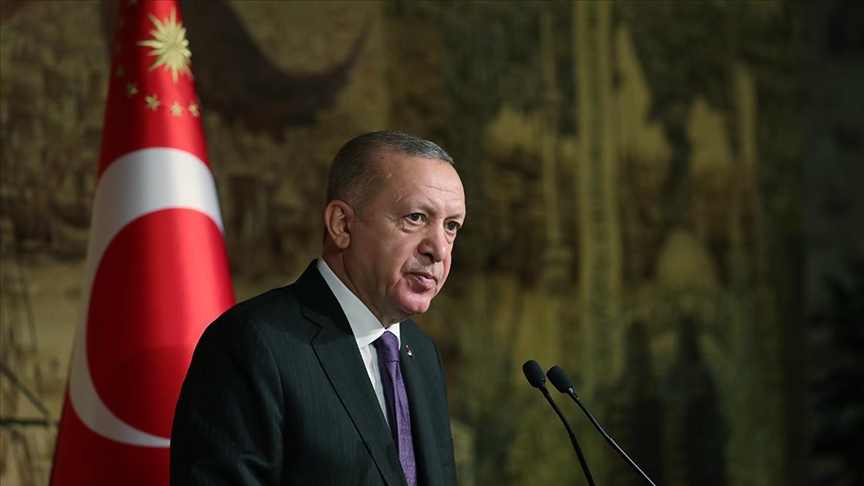 President Recep Tayyip Erdogan spoke at the admission of the DEIK Executive Board. While criticizing the high interest, Erdogan emphasized financial discipline. Erdogan stated that he knows how the banks exploit the business world and said “We almost pride ourselves on sinking many of our companies. Whether they listen to me or not, I’m against high interest”. When appropriate, we talk about making Turkey an interest heaven. On the other hand, our banks talk about how much profit they made. Okay but how many investors did you bring in, tell me! Talk about how much employment we provide! I need investment, employment, production, export. (Haberturk 15.01.2021)

Comment:
The fact that you are trying to purify your world that you have built by sins, crimes and haram and yourselves through some statements, does not liberate you from the responsibility for these crimes. As Ibn-i Shiberme said, “I would be surprised at the fools who abstained from those delicious foods that Allah had made lawful out of fear of upset stomach and disease, and who did not abstain from evil out of fear of dolent torment.” Now and then, the President expresses that he is against high interest and that interest should be ethical. We know that these expressions regarding interest, in times when the economy is jammed, originate from the worry of purifying his government and himself.

The President, who previously saw interest as a world reality, now complains that it is high. Well, who is raising the interest? More importantly, who are those who dictate interest, which is haram, in every division in life? Let’s remind the President, weren’t you the one who said ‘’elect me before the presidential elections and see how the interest is fought against’’. In the last 3 years, you have made the interest rate lobbies richer, and condemned the people to banks. Obviously, the palace mullahs around you have forgotten these ayahs of Allah Subhanahu Wa Ta’ala;

“O believers! Fear Allah, and give up outstanding interest if you are ˹true˺ believers. If you do not, then beware of a war with Allah and His Messenger! But if you repent, you may retain your principal—neither inflicting nor suffering harm.” [Al-Baqarah 278-279].

While interest, which He (swt) very definitely has forbidden, is definite with clear texts, they do not dare to remind you of these. However, hundreds of salaried consultants around you are incapable of expressing the destruction, distrust and nonproduction that interest creates in society. Dear Erdogan! You are the ones who during your eighteen-year reign have offered “interest heaven” to the banks. During this period, your government gave the source of people, consisting of 522 billion dollars, to money barons and banks as interest. You have made it easy for the banks and guaranteed them, such that they almost have become legal usurers. Again, during your reign, millions of people who had never been involved in loans were given loan on interest. And those who prided themselves on this evil act were the bureaucrats you appointed. Look, according to the data of the Banks Association of Turkey (TBB), the credit debt of the people in Turkey is 706 billion TL as of the date of July 2020. In other words, approximately 100 billion dollars. Of this, 343 billion TL is consumer loan, 239 billion TL is housing loan and 8.6 billion TL is vehicle loan. And 115 billion TL is about loans on individual credit cards. This picture is the picture of oppression, rebellion, sedition and betrayal. This picture which is felt proud of is unfortunately your work. This is the picture of dragging yourselves together with the people to torment.

If the President was sincere in his thoughts regarding interest, he would abolish the interest he reflects on the people in every item before the interest of banks. Those who govern the people cannot lie to the people. They cannot deceive the people. Without your decision and approval, none of the administrators you appointed can raise the interest in spite of you. Now that you are sitting in that seat, you are responsible for all these crimes. Fear Allah! Do not reduce the interest worry to only worldly issues like production, employment and export. See from now on that this is waging war against Allah and His Messenger and desist from it. Interest is the disaster of societies, the happiness of the rich minority, the exploitation of labor and the enemy of welfare. Whether high or low, interest is forbidden in difficulty as well as in wealth. As long as you do not consider it as forbidden and distance yourselves from it, you will only deceive yourselves.

Certainly, together with the dominance of Islam, this fusty system will be buried in the dump of history. And that very day, the people will taste welfare in the world under the reign of upright men and show ambition to gain the happiness of the Hereafter In sha Allah.