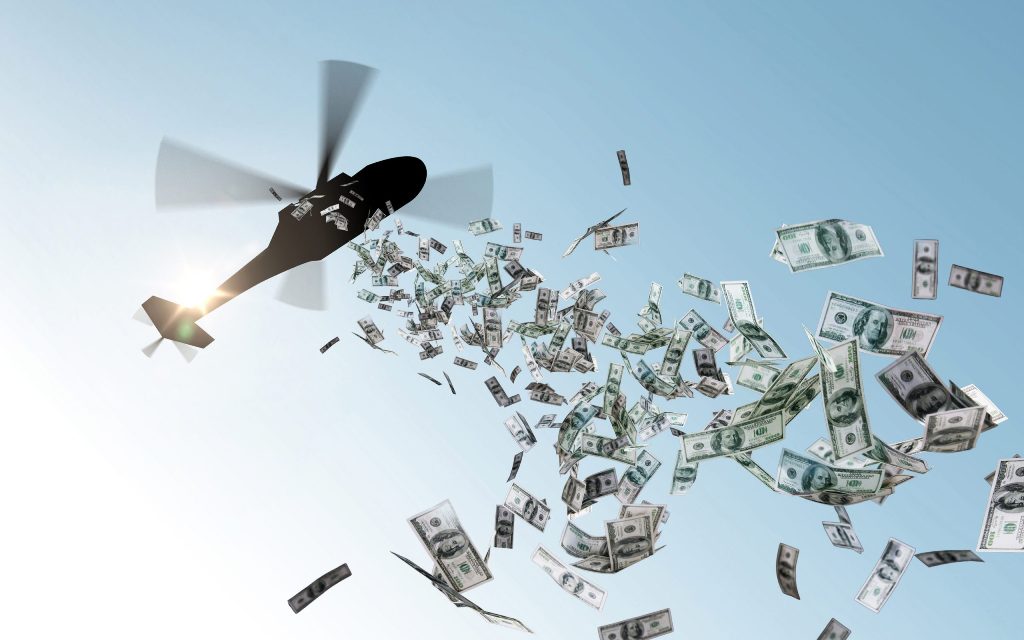 In an interview with the Business FM (BFM) station on the 16th November 2020, the Malaysian Deputy Minister of Youth and Sports, Wan Ahmad Fayhsal Wan Ahmad Kamal suggested that the monetary policy dubbed the “helicopter money policy” where the Central Bank directly creates money and gives it to the people for spending should be seriously considered by the Malaysian government. This is an appropriate initiative, according to Wan Fayhsal, in view of the current economic downturn experienced by Malaysia due to the Covid-19 pandemic. “We can couple this (forgiving debt) with a helicopter money monetary policy, where the Malaysian Central Bank can directly print money and give it to the people so that they can spend it,” he was quoted as saying.

As would have been expected, netizens were quick to ‘rubbish’ this idea. Amongst those who reject the idea was the former chairman of Permodalan Nasional Berhad (PNB), Malaysia’s largest fund management company, Jalil Rasheed. Jalil told the news outlet, Malaysiakini, that a helicopter policy can backfire badly, as demonstrated by hyperinflation in countries such as Venezuela and Zimbabwe. On the other hand, there are also economists that support the idea of ‘printing money’ or quantitative easing (QE), especially during the pandemic. Kameel Mydin Meera, a former dean of the Institute of Islamic Banking and Finance at the International Islamic University Malaysia, believes the government should opt for QE. “QE allows the government to increase the supply of money in the economy without borrowing. It involves printing or creating new ringgit and the idea is to boost spending within the economy and in doing so, stimulate the economy”, he commented.

In the current capitalistic system, governments play the game of balance in order to keep the economy going. When the economy slows down, QE is one of the measures to encourage spending, hence keeping the economy alive. However, when there is an excess of money in the market, inflation starts to surface. To counter this, one of the policies involves increasing the interest rate to reduce the amount of circulating money, thus balancing out the inflationary bubble. This economic balancing act is clearly not sustainable and the main reason for it is that the money that exists today is fiat money, paper money that is not backed by gold and silver. These banknotes “become valuable” due to laws enacted by the governments, forcing the public to believe that the paper is ‘valuable’ in accordance with the nominal value stated on it. This rule applies to paper money as well as other forms of fiat money such as digital money.

By default, the use of fiat money itself results in inflation and economic injustice. The act of printing money will inevitably cause inflation resulting in economic recessions which are highly very detrimental to the economic activities notably for the lower classes. Despite the ‘balancing act’, the recessions suppress purchasing power, increase the unemployment rate and bring about various social ills in the community. Islam comes with a solution that provides justice and economic stability. Before Islam, the use of gold and silver as currencies was already known. Roman and Persian empires were already using these metals as the means of economic transactions . When Islam came, Rasulullah ﷺ prescribed the use of dinar and dirham, setting them as currencies.

World history has already seen how gold and silver lasted and provided economic stability for more than a thousand years under Islam as a means of economic transaction before the United States unilaterally terminated convertibility of the US dollar to gold, effectively bringing the Bretton Woods system to an end and rendering the dollar a fiat currency. Since fiat money came into being with all the associated practices, problems begin to arise, and often become so serious that the world economy is affected badly. The implementation of the flawed capitalist economic system, with its fiat money and interest based policies, is the root of the problems that plague the world today. The emergence of the COVID-19 pandemic has further exposed the fragility of the system. So, it is surprising, if not foolish, for us to continue clinging to this rotten system. What we need is a systemic change that transforms this fragile, rotten system to a system that values stability, prosperity and peace – a system that is granted to us by the Creator of the Universe – the system of Islam.