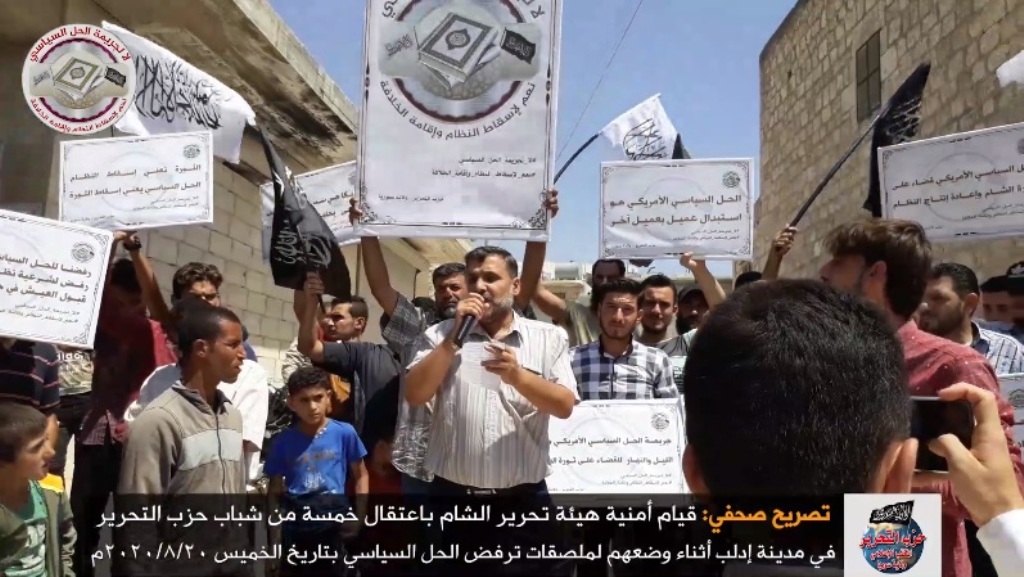 Arrests of the Youth of Hizb ut Tahrir / Wilayah of Syria; and Distorted Campaigns for the Party in Media Outlets Loyal to the Tyrant of Al-Sham and Others in Opposition!

Hizb ut Tahrir Launches its Campaign “No to the Political Solution Crime, Yes to Toppling the Regime and Establishing the Khilafah”

Hizb ut Tahrir / Wilayah of Syria launched its campaign against the crime of the American political solution on 13/8/2020, and began to warn about this heinous crime, which will reproduce the regime of the tyrant of Al-Sham again; to consolidate servitude and improve the conditions of slavery at best! The Hay’at Tahrir of Al-Sham (HTS), which controls the Idlib region refused except to reveal the truth of its planned role; and that it is only a tool to carry out this crime after it implemented the terms of the Sochi Agreement and took over the protection of the Russian patrols on the M4 road. It carried out a series of arrests of the Shabab (dawah carriers) from Hizb ut Tahrir; while they were carrying out the campaign, five of its Shabab were arrested in Idlib. Then followed the arrest of two Shabab in the city of Binnish. Then two were arrested in the town of Atma; then followed with another arrest after a women’s demonstration took place in the town of Atma calling for the release of those unjustly detained by HTS, to become the total of those arrested by Hay’at Tahrir al-Sham in connection with the campaign ten Shabab, most of whom are still detained at the moment of writing this statement. A wide range of media outlets have covered this; whether it is attributed to the tyrant of Al-Sham; or affiliated with the opposition, dealt with the news with much misinformation, each according to their orientation; in a way that serves its policies, without taking into account the accuracy and objectivity of the presentation; or the truth is investigated impartially and without bias, to visualize the matter as a struggle between two factions over areas of influence; without forgetting to belittle the party at times; associating it with extremism and terrorism at other times; and accusing it of trying to form an armed faction in the western countryside of Aleppo.

Hence, it was necessary for us, in this case, to explain to the Islamic Ummah in general and to the people of Al-Sham in particular the following:

Hizb ut Tahrir is a political party founded in 1953 by Sheikh Taqi al-Din al-Nabhani, May Allah (swt) have mercy on him, with the aim of resuming the Islamic way of life, which stopped after the overthrow of the Muslim state the Khilafah (the caliphate); at the hands of the criminal Mustafa Kemal in 1924. Hizb ut Tahrir adopted the method of the Messenger of Allah ﷺ, by which he established the first state of Islam in Medina. The party took it as a method for them, then they set out to call for the establishment of the Khilafah Rashida (rightly-guided caliphate) upon the method of Prophethood. Which the Messenger of Allah ﷺ gave the glad tidings of its return; and the party has spread in many countries of the Islamic world and elsewhere; including the land of Al-Sham, which witnessed a revolution against one of the most powerful tyrants in the modern era. Hizb ut Tahrir worked to support the overthrow of the tyrant and it tried hard to rationalize the path towards the right direction so that the sacrifices of the people of Al-Sham would not be lost in the corridors of the international conferences, and the conspiracies of countries which hate Islam and Muslims. It was an honest advisor and pioneer who did not and will not lie to its people. It warned against the Geneva, Astana and Sochi conferences, as well as against the dirty political money whose consequences are still present today, and warned against truces, negotiations and de-escalation areas, which were one of the reasons for the great decline in Al-Sham Revolution, and it also warned of the sly role played by the Turkish regime. The party now warns of the crime of the American political solution that will bring down Al-Sham revolution and preserve the survival of its tyrant.

O Muslims in Al-Sham, the abode of Islam:

Every fair follower knows; that all what Hizb ut Tahrir warned against had occurred; and that the lack of a listening ear was the reason for what Al-Sham revolution has reached to, as every fair observer knows that Hizb ut Tahrir’s struggle is not with the armed factions nor with the sons of the Muslim. Rather, its struggle is with the disbelieving West and its agents from the Muslim rulers, and it is an uncompromising struggle. Neither flattery, nor courtesy, which exposed its carriers to arrest, murder and prosecution in the prisons of the tyrants, on top of them the tyrants of Al-Sham, father and then son. They are accompanied by media campaigns of defamation, slander, ridicule and belittling, all of which were styles that were used against the messengers of Allah Almighty. Allah (swt) says: فَأَرْسَلَ فِرْعَوْنُ فِي الْمَدَائِنِ حَاشِرِينَ، إِنَّ هَؤُلَاءِ لَشِرْذِمَةٌ قَلِيلُونَ، وَإِنَّهُمْ لَنَا لَغَائِظُونَ، وَإِنَّا لَجَمِيعٌ حَاذِرُونَ “Then Pharaoh sent among the cities gatherer * [And said], “Indeed, those are but a small band * And indeed, they are enraging us, * And indeed, we are a cautious society” [26:53-56].

Hizb ut Tahrir wages its political struggle against the disbelieving West, in order to uncover and expose all conspiracies, as well as its intellectual struggle against the ideas and concepts of infidelity alone, and it seeks victory and support from the people of power; Following all of this, the approach and method of the Messenger of Allah (swt), to establish the Khilafah Rashida (the rightly guided Caliphate) upon the method of Prophethood and in order to allow the implementation of the rulings of Islam. قُلْ هَذِهِ سَبِيلِي أَدْعُو إِلَى اللَّهِ عَلَى بَصِيرَةٍ أَنَا وَمَنِ اتَّبَعَنِي وَسُبْحَانَ اللَّهِ وَمَا أَنَا مِنَ الْمُشْرِكِينَ “Say, This is my way; I invite to Allah with insight, I and those who follow me. And exalted is Allah; and I am not of those who associate others with Him.” [12:108].

And Allah willing, it will hold on to its idea. steadfast in its method; it works with and for its Ummah, until Allah (swt) honors us all by supporting His religion, fulfilling His promise, and fulfilling the glad tidings of the Messenger of Allah ﷺ when he said: «ثُمَّ تَكُونُ خِلَافَةٌ عَلَى مِنْهَاجِ النُّبُوَّةِ» “then there will be a Khilafah (Caliphate) upon the method of Prophethood.”