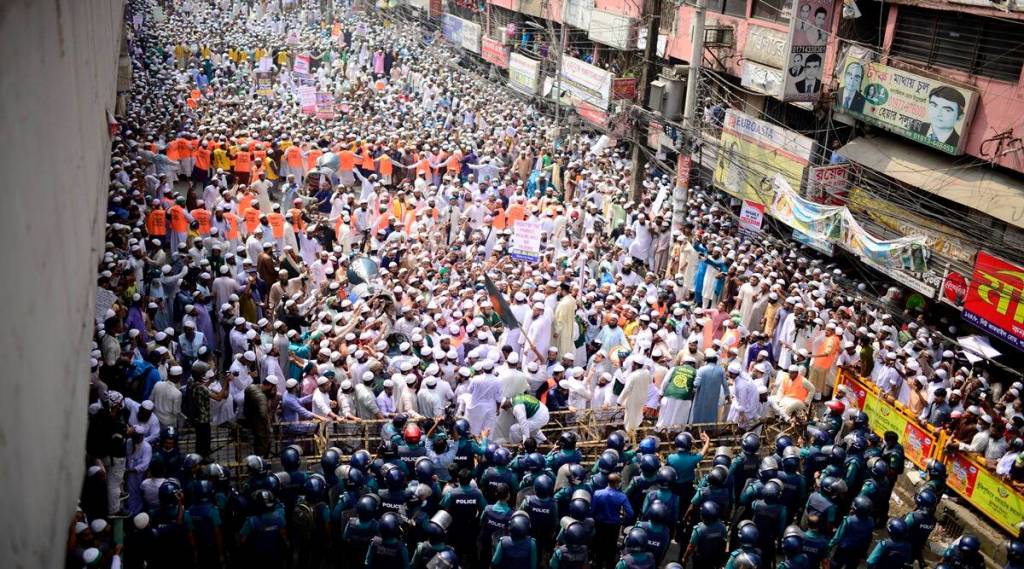 Bangladesh will not take any side in the ongoing unrest surrounding France, Foreign Ministry sources have said. French President Emmanuel Macron’s remarks on religion will not be condemned by the government and the ongoing anti-French rallies will be tolerated. (Bangla Tribune, Wednesday, October 28, 2020). “Security has been beefed up at the French embassy, for Alliance Francaise and at the French International School of Dhaka. Security for French nationals in the country has also been increased,” a Foreign Ministry official said on Wednesday.

Meanwhile, protests continue in Bangladesh against the cartoonish depiction of the Prophet Mohammed ﷺ in France. “At least 50,000 people have staged the biggest demonstration yet in Bangladesh over French President Emmanuel Macron’s stance on the right to publish cartoons of the Prophet Muhammad, as they tried to reach the French embassy in Dhaka, police said.” (Al Jazeera, November 2, 2020).

The Ruwaibidhah (worthless and virtueless) Hasina regime could not hide its true anti-Islamic character when the entire Ummah is in a rage at the vile French president Macron and his attacks on Islam and our beloved Prophet Muhammad ﷺ. Since the beginning of the protests, Sheikh Hasina remained totally silent over the abhorrent statement of Macron. And finally she let the Muslims know where her true faith and allegiance rests upon. In a land of Muslims, she did not hesitate to take the outrageous stance of defending the honor of the despicable French President who has been in a mission to attack the sanctities of Islam. When this debased Macron wants to win the upcoming election by fanning and exploiting anti-Muslim hatred, Hasina also wants to remain in power by demonstrating her anti-Islamic stance to the Kafir colonialists. Allah SWT says in the Quran: لَا تَجِدُ قَوْمًا يُؤْمِنُونَ بِاللَّهِ وَالْيَوْمِ الْآخِرِ يُوَادُّونَ مَنْ حَادَّ اللَّهَ وَرَسُولَهُ “You will not find any people who believe in Allah and the Last Day, making friendship with those who oppose Allah and His Messenger…” [al-Mujaadilah 58:22].

In Sheikh Hasina’s self-styled “Madinah State” (“Country to be run as per Madinah Charter: PM”, The Daily Star, March 08, 2015), Pakistan’s envoy could be summoned over ‘insulting’ remarks against her father Sheikh Mujib and an university professor could be terminated for ‘defaming’ him, but not a single word of protest could be heard from her mouth in defense of the honor of RasulAllah ﷺ whereas he ﷺ clearly said, «لَا يُؤْمِنُ أَحَدُكُمْ حَتَّى أَكُونَ أَحَبَّ إِلَيْهِ مِنْ وَلَدِهِ وَوَالِدِهِ وَالنَّاسِ أَجْمَعِينَ» “None of you have faith until I am more beloved to him than his children, his father, and all of the people” (Muslim). By stating her “neutrality” and not to taking side with the Muslims, Hasina regime has openly declared its enmity towards Islam and RasulAllah ﷺ. Now it is upon our shoulders to demonstrate our true love for RasulAllah ﷺ by establishing his ﷺ prophecy, i.e., the second Khilafah Rashidah (rightly guided Caliphate) on the method of Prophethood which will bring a permanent end to the insults on him by the Kuffar.