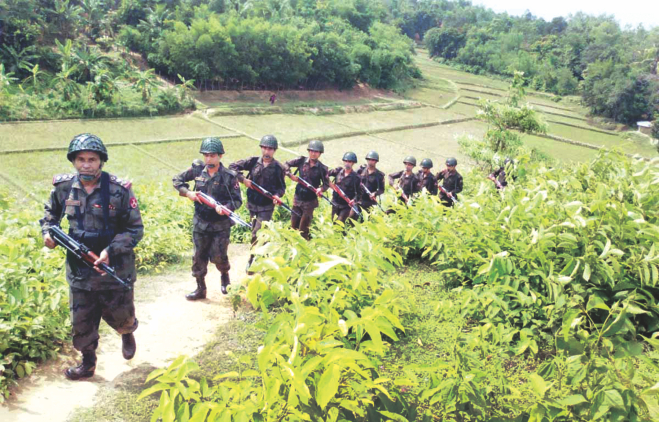 When a fresh wave of Muslim genocide is being carried out in Myanmar by its army in the name of “clearance operation”, using a shady militant attack on police check posts in the Rakhine state as an excuse to completely wipe out the civilian Muslims, all that the treacherous Hasina government could do was to offer joint “anti-terrorism operations” to the genocidal Myanmar army! On Monday 28th August (2017), Bangladesh Foreign Ministry sent a formal proposal to Myanmar Embassy in Dhaka expressing Bangladesh’s interest to help the Myanmar army that is slaughtering our own brothers and sisters over there! This government is concerned about the security of Myanmar, but pays no heed to the plight of Myanmar’s 1.1 million persecuted Rohingya Muslims who have been seeing some worst tragic developments in the last few days.  SubhanAllah!

Our Rasul ﷺ warned us about these rulers when he said: «سَيَأْتِي عَلَى النَّاسِ سَنَوَاتٌ خَدَّاعَاتُ يُصَدَّقُ فِيهَا الْكَاذِبُ وَيُكَذَّبُ فِيهَا الصَّادِقُ وَيُؤْتَمَنُ فِيهَا الْخَائِنُ وَيُخَوَّنُ فِيهَا الْأَمِينُ وَيَنْطِقُ فِيهَا الرُّوَيْبِضَةُ قِيلَ وَمَا الرُّوَيْبِضَةُ قَالَ الرَّجُلُ التَّافِهُ فِي أَمْرِ الْعَامَّةِ» “Indeed, before the Hour (Day of Judgment) there are deceptive years – the truthful one will not be believed, the liar will be believed, the trustworthy one will be accused of betrayal, the treacherous one will be trusted, and the Ruwaibidah will speak.” It was said, “And what is the Ruwaibidah?” He ﷺ said: “The man who is Tafih (insignificant, unwise, etc.), he will speak on the affairs of the general public (he will be trusted to rule and he will speak in the name of the people).” (Ahmad, Ibn Maajah). And indeed, Ruwaibidah Hasina has shown her ugly face by abandoning the persecuted Rohingya Muslims and rather extending her hands of cooperation towards the butcher Myanmar army.

Since last Thursday (24/08/2017), murderous Burmese soldiers together with Rakhine Buddhist terrorists armed with swords, machetes and guns have kept on attacking innocent Rohingya civilians, mainly women and children. Thousands of Rohingya are now homeless and trapped on boats at no man’s land of the river near Bangladesh. Those who escaped the surging persecution have been recounting their gruesome experiences carried out by the regime’s army and militia. Men are being blindfolded and lined up to be killed in front of their family members. Young children, even newborns, are also stomped or cut to death or thrown into lakes. Laa hawla wa laa quwwata illa Billaah! To make the matter worse, the Myanmar army is firing mortars and machine guns at fleeing civilians as they attempt to cross the border into Bangladesh to escape bloodshed. And, when Rohingya Muslims are fleeing the hell of Myanmar in the hopes of taking shelter in Bangladesh, this treacherous government has ordered its border security force to push them back to that very hell or dump them in the Bay of Bengal.  Those who could manage to reach Bangladesh are not allowed to further move into the territory. Since last Saturday (26/08/2017), nearly 3000 Rohingya landed on the Bangladeshi shore only to be cordoned off shamelessly by the Border Guard Bangladesh (BGB). Not content with this treachery, the Hasina government has now proposed joint operations with Myanmar forces, to assist them in their killings!

But, Subhanallah, the clear detachment of the Ummah from the traitorous Hasina government is becoming obvious on the ground. When this government ordered BGB to show no sympathy towards the Rohingya, local villagers, who themselves live from hand to mouth, are extending their helping hands to their brothers and sisters with food, water and other life-saving materials [The Daily Star, August 27, 2017]! Once again this Rohingya dilemma proved that Ummah’s emotion goes just the opposite direction of what our rulers had really wished for. The sense of brotherhood, i.e. one ummah, transcends all the artificial thoughts trying to be infused into us by our nation-state leaders.

O Sincere Muslim officers of the Bangladesh Army! Listen to the pleading of your brothers and sisters of Arakan! Do not close your ears to their cry for help when your ruler chooses to betray them! The permanent solution to their crisis lies in your hand, and by this we do not mean that you arrange peace negotiations with the murderous Myanmar army. We rather mean to remind you of your duty to be organized under the sincere and brave leadership of Hizb ut Tahrir to re-establish the Khilafah state and march towards Myanmar to bring it under the blessed shade of the Khilafah. The helpless misery of Rohingya Muslims keeps on showing us that how cheap Muslims’ blood has become after the umbrella of the Islamic world, the Khilafah state, was abolished in 1924. The superimposition of the cursed nation-state system upon us has caged you into small territory for which the wretched plight of the Rohingya are falling on your deaf ears, otherwise by now a Muhammad bin Qasim would certainly have arisen out of you to rescue the Muslims of Arakan. When you are the ones who hold the key to power, how does this traitor regime even dare to push back the helpless Muslims to the hands of the Buddhist butchers, and even offers to assist them in their killings? Does not the command of RasulAllah ﷺ shake you hard?  «الْمُسْلِمُ أَخُو الْمُسْلِمِ لَا يَظْلِمُهُ وَلَا يُسْلِمُهُ…»“A Muslim is a brother of another Muslim, so he should not oppress him, nor should he hand him over to an oppressor” [Bukhari]. Fear Allah and do not sit idle when your brothers and sisters are slaughtered in broad day light! Fear the day when you will be pushed back to Jahannam for your inaction while your tyrant ruler was sending your Muslim brothers and sisters back to the butchers! We remind you, O officers, that it was the Khilafah that had always defended the honor of the Muslims, totally ignoring the geographical boundaries and borders.

We in Hizb ut Tahrir also call upon you all, O Muslims of Bangladesh, to come forward and take realistic actions which can bring permanent end to the misery of our Rohingya Muslims. We urge you to engage in the political struggle with Hizb ut Tahrir for the reestablishment of the Khilafah (Caliphate) upon the method of the Prophethood. Only under the blessed Khilafah, we can again be united and strong and protect the dignity, honor and wealth of the Muslims in various regions, including that of the Rakhine Muslims. Poor Bangladeshi Muslims of the border areas are performing their utmost by helping their Rohingya brothers and sisters. You who are residing in the towns should also play your part – leverage your network inside the army to convince them about their obligation to rescue the stateless Rohingya; make them understand that the true solution of all the miseries of the Muslims is to be united under the leadership of the promised Khilafah. HasbunAllah wa ni’mal wakil, ni’mal mawla wa ni’man nasir.

“Verily, Allah will help those who help His (Cause). Truly, Allah is All-Strong, All-Mighty.”