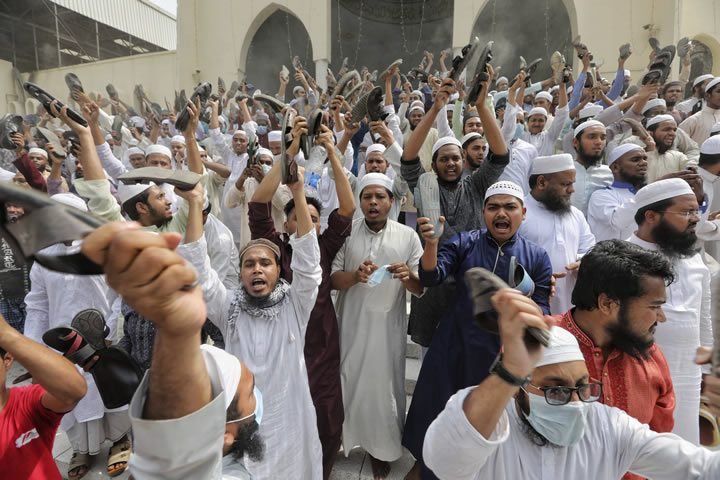 Where are the People of Power who will Save the People from the Clutches of this Rogue Hasina Regime?

At a time when the people of the country are rising above fear and intimidation and protesting against the limitless oppression of the Hasina regime and her anti-Islamic and anti-state activities to fulfill their duties to self and Imaan, Hasina has resorted to unprecedented oppression against the people to establish herself as the most tyrant Bengali ruler in a thousand years. We have already seen that this regime has stained its hands with the blood of untold number of Muslims by firing indiscriminately on the protesting believers against the arrival of the butcher Narendra Modi. Thereafter, they have suddenly declared a country-wise lockdown to quell the protests of the people and has put the livelihood of the people in grave danger. While the people in various places are demanding the opening of the ways of earning their living, we are witnessing the ruthlessness of the Hasina regime. On Monday (April 5, 2021), security forces opened fire on a group of people protesting against lockdown in Saltha, Faridpur District, killing and injuring an unknown number of people. In New Market for participating in protests demanding the opening for their livelihood two cases have been filed against 3500 business people, and the people protesting in different parts of Dhaka have been brutally suppressed by the police and the cadres of the ruling party. The tyrant Hasina regime is giving a deceptive narrative trying to cover up the peaceful protests of the people through staging dramas of so-called “attack on police stations and government installations” or “the police fired in self-defense”, which the people have rejected with hatred.

The people are unified that Hasina regime is still in power despite widespread dissatisfaction and mass protests only because of the support of the Mushrik-Kafir Imperialists and a small number of criminals in the security forces, something that Hasina often says very openly. But the thing that amazes people and the answer they are looking for is: How do the sons of the Muslim Ummah in the security forces shoot their own people? They want to know: Is there no sincere officer in the security forces who will reject Hasina’s unjust order? The people are also asking: How can the sincere Officers of the Military remain silent even after witnessing the unprecedented crimes of the Hasina regime against the people and Islam? What is stopping them from taking a stand for Islam and the people and seizing the hand of Hasina’s tyranny? Has fascination for the trivial things of the world made them lose their conscience such that they have forgotten the oath to protect the people? Have they forgotten the wrath of Allah (swt) that if they do not grab seize the hand of a tyrant like Hasina, Allah will seize them in the Hereafter, because only they have the material power to seize Hasina? Allah (swt) says:

“And this worldly life is not but diversion and amusement. And indeed, the home of the Hereafter – that is the [eternal] life, if only they knew” [Surah Al-Ankaboot: 64]