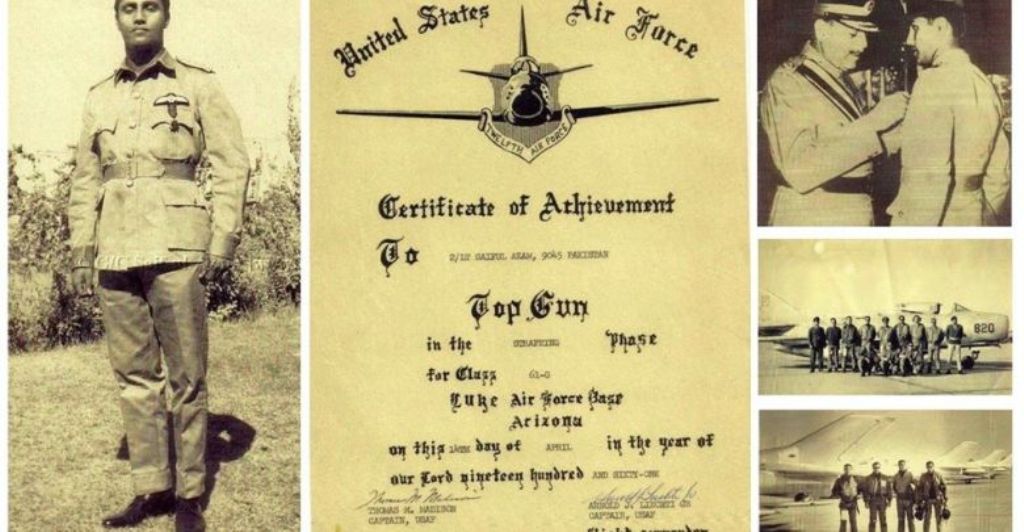 clearly reflects its Allegiance towards the Enemies of Islam

The news of the death of the legendary fighter pilot of Bangladesh, Group Captain (retd.) Saiful Azam, who passed away in silence at Dhaka on Sunday afternoon, has stirred the deepest emotions of the Ummah in Bangladesh and across the Muslim world. And the emotional toll on people for this loss was in fact very high when they came to know the bravery and unmatchable achievement of this ‘unsung hero’ against the enemies of Islam – the illegitimate Jewish entity and Indian Mushrik State. Apart from his being the only fighter pilot who fought for four countries (Jordan, Iraq Pakistan, and Bangladesh) at war, this war hero captured Muslims’ hearts for his courageous role in attacking air force bases and destroying superior fighter planes of the enemies – India and the Jewish entity ‘Israel’. To date, he remains the one to have downed the highest number of enemy fighters, the only one to have downed four enemy aircrafts during the 1967 Six-Day War against the illegitimate Jewish entity. Also, he shot down an Indian Air Force Gnat interceptor during the 1965 war with India after returning from a successful ground attack on an Indian airbase. He was a role model of defeating superior enemies with inferior military equipment. While a Muslim military officer’s spirit of fighting with their arch enemies is ignited with the brave stories of this fighter pilot, alas, the lowly current rulers of Bangladesh deliberately avoided giving him due respect, since his achievements do not conform to the subservience these rulers show towards the Jewish and Mushrik States.

The fact of the matter is that uncountable brave fighters like Saiful Azam are still present in the ranks of our military, but alas, their talents and skills are being wasted systematically in favor of the Kuffar. Their abilities are being exploited to fulfill the wicked geopolitical agenda of the Western colonialists under the cover of UN Missions. Instead of sustaining the ability and mindset to conquer India, a small demonstration of which was in the 2001 border battle in which the Indian forces were given a shameful defeat by a small number of personnel with limited weapons, the morale and spirit of our military are being destroyed by compelling them to be submissive in front of those same cowardly Mushrik Indians. In truth, despite having various limitations and shortcomings, the love to become shaheed (martyr) more than the love of Kuffar for their lives are what make us superior on this Earth, and the case of Saiful Azam and many other hidden and wasted heroes of this fertile land is testament to this fact.

O Sincere and Brave Officers of the Armed Forces of Bangladesh! Your dignity and honor are not protected in the hands of the current traitor leadership; rather, they are exploiting your talents to serve the interests of the colonialist Kuffar only, and then eventually they will cast you aside even if you have remarkable achievements like that of Saiful Azam. Your true ancestors are Sa’ad ibn Muadh, Khalid bin Walid, Muhammad Bin Qasim, Tariq Bin Ziad and Salahuddin Ayubi, who are the inspiration of invincibility and braveness for the fighters in the past and present like Saiful Azam, and only under the Khilafah (Caliphate) State, the tradition of their courage and braveness can be restored and their honor can be remembered and protected. And to achieve this objective, become the “new Ansaar” (helpers) for establishing the promised Khilafah Rashida (rightly guided Caliphate) on the method of Prophethood under the leadership of Hizb ut Tahrir. So, arise to grant nussrah (support) for this Deen of Allah (swt), and hasten to make Islam powerful again under the great Army of the Khilafah State and be of those who Allah (swt) has mentioned: مِنْ الْمُؤْمِنِينَ رِجَالٌ صَدَقُوا مَا عَاهَدُوا اللَّهَ عَلَيْهِ فَمِنْهُمْ مَنْ قَضَى نَحْبَهُ وَمِنْهُمْ مَنْ يَنْتَظِرُ وَمَا بَدَّلُوا تَبْدِيلاً “Of the believers are men who are true to that which they covenanted with Allah. Some of them have paid their vow by death, and some of them still are waiting; and they have not changed (their determination) in the least” [Al-Ahzab: 23].