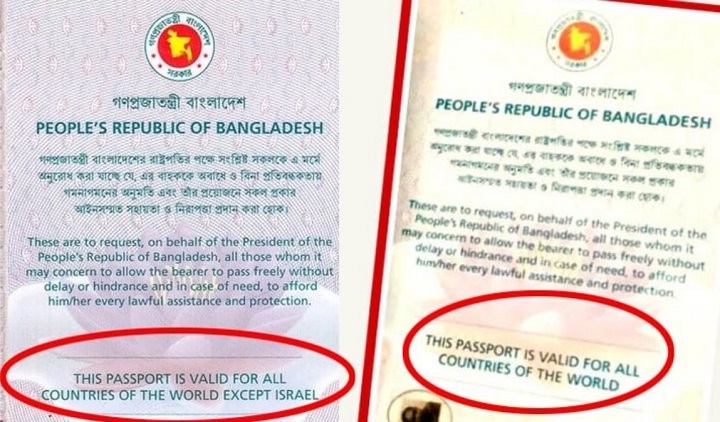 In the name of bringing changes to meet so-called “international standards”, Hasina government has dropped the words “except Israel” from the new passports. The Zionist entity also welcomed this move to remove the travel ban and urged Bangladesh to normalize diplomatic ties with them. This outrageous decision comes immediate after the murderous Jewish regime’s brutal onslaught on the defenseless people of Gaza. By joining other hypocrite rulers of the Muslim lands, Sheikh Hasina has also publicly taken her first step to ease stance towards the Jewish occupying force and to recognize it eventually. Her treacherous regime has already been dealing with the Jewish entity secretly and from behind a cover. It purchased the cellphone monitoring and interception systems for mass surveillance developed by the “Israeli” company PicSix. Now, the regime does not want to hide these clandestine relations anymore and wants to come out of the hypocrisy.

O Muslims, demanding anything from these traitorous rulers will bring no change as there is no good in them. Allah (swt) says about these Munafiqun,

“May Allah destroy them; how are they deluded?” [Al-Munafiqun:4]. These rulers exist to serve the interests of the Kafir Colonialists and hence they will collaborate with their illegitimate Jewish child placed within the heart of the Muslims. Our slavish rulers are the only reason this illegal Jewish entity could dare to terrorize and slaughter the Muslims. These rulers simply exploit the sentiment of the Ummah and gives lip-service against this Jewish enemy. Muslims have witnessed Hasina’s hypocrisy when she shed crocodile tears in the parliament over the martyred Palestinian children, while her government maintains relations and collaborates with this enemy secretly. Muslims of Bangladesh have also rejected outright BNP’s support for Joe Biden’s two-state solution, which is nothing but recognizing the illegal Jewish entity.  So, to liberate the blessed land of Al-Quds, the land of Isra’ and Mi’raj, we need to get rid of these Ruwaibidha (ignorant and foolish) rulers who obey the Colonialist Kuffar above the obedience of the Allah Azza Wa Jal.

O Sincere Officers in the Military, dealing with the avowed enemy of the Muslims and normalizing relations with them is one of the gravest sins that this is taking place in front of your eyes. How are you going to face Allah Al-Haseeb (The Reckoner) about the audacity of these treacherous rulers when you have the real power to remove them?

O Officers, this helpless Ummah is eagerly waiting for the appearance of a courageous general amongst you who will follow the footstep of the Salahuddin Al-Ayubi.  Liberation of the Jerusalem (Al Quds) for the second time from the crusader was not a magic. The great Salahuddin also had to take many bold decisions and overcome many obstacles which were seen as unrealistic by many back then. But he removed the incapable ruler from the power, reunified the fragmented Khilafah state first before proceeding towards Al-Quds to liberate it by going against the advice of his advisers.

O Sincere Officers, do you not hear the demand of the Muslims of the country to remove Hasina government and give nusrah (material support) to Hizb ut Tahrir in establishing the second Khilafah Rashidah (rightly guided Caliphate)? The upcoming Khilafah will come out to challenge the current Colonialist world-order, dismantle the artificial nation-state borders to reunify with the militaries of neighboring Muslim lands and expedite you to eliminate the illegal Jewish entity. O Officers, we call upon you, who are proud of your Deen, do not miss the great opportunity to make your place in the history alongside Salahuddin by liberating the holy land of Al-Quds for the third time through waging Jihad fi Sabilillah. Know that, Allah (swt) ordains, they are not established nor reassured.

“Then when the final promise came, [We sent your enemies] to sadden your faces and to enter the Masjid (Al-Aqsa), as they entered it the first time, and to destroy what they had taken over with [total] destruction” [Al-Isra’: 7]