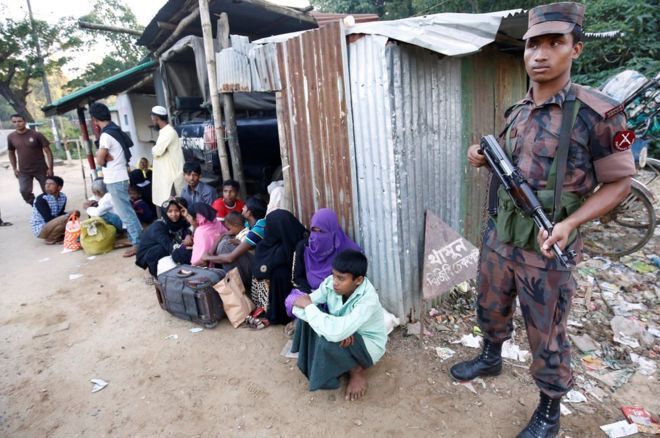 Since August 24, 2017, the latest spate of state violence on the Rohingya Muslims, one of the world’s most persecuted peoples, is taking place after an alleged insurgent attack on the police and border outposts. Myanmar’s army has been carrying out a systematic and indiscriminate campaign against Rohingya villages in the state. According to Reuters (September 2, 2017), at least 2,600 buildings in Rohingya villages have been set ablaze by Myanmar army. In just one week, the UN estimates, almost 60,000 Rohingya have fled escalating violence, attempting to seek safety in neighboring Bangladesh.

Decades of persistent and systematic brutal persecution on the Rohingya Muslims by the Myanmar army has entered a darker phase. The butcher Myanmar military together with Rakhine Buddhist terrorists armed with swords, machetes and guns have initiated an “area clearance operation” under the pretense of fighting insurgency. Myanmar military reported on September 2, 2017 that nearly 400 Muslims have already been killed in the last one week, even though we know that the actual figure is undoubtedly much higher, and the numbers are escalating everyday as we speak. Harrowing eye witness accounts have already gone viral on social media and been covered by mainstream news media as well. One survivor described that Tatmadaw (Myanmar army) soldiers along with Rakhine Buddhist militia arrested a large group of Rohingya men, marched them into a nearby bamboo hut that was set it on fire, burning them to death (The Telegraph, September 2, 2017). Men were also being rounded up blindfolded to be slaughtered en masse in front of their family members, women and young girls are being subjected to gang rape, young children, even newborns, were also stomped or beheaded or thrown into lakes. Laa hawla walaa quwwata illa Billaah! To make the matter worse, Myanmar army has been firing mortars and machine guns at fleeing civilians as they attempt to cross the border into Bangladesh to escape bloodshed.

When a team led by former UN Chief Kofi Annan submitted a year-long investigation report to Myanmar’s de facto leader Aung San Suu Kyi about the Rohingya human rights violations and urged the Myanmar government to end state-sponsored violence on them, suddenly we saw a ‘shady’ insurgent attack on the Myanmar police and border outposts at the end of August. Since then, the Burmese military has been undertaking this deadliest military crackdown of the decades. And the most horrible part of this genocidal operation is that the entire Rohingya population, including women and children, were collectively declared guilty of the attacks!! Despite there being no substantiated evidence that the attackers were in fact from the Rohingya, the entire Muslim population is being targeted as “extremists” who are to be completely wiped off the face of the earth. And predictably Western world has turned a blind eye to this massacre.

Amid such gruesome genocide, we witnessed the most obnoxious response from the treacherous Bangladesh’s Prime Minister Hasina. Instead of providing sanctuary to the fleeing Rohingya Muslims, she ordered Border Guard Bangladesh (BGB) to push them back to the Bay of Bengal. But the hypocrisy does not end here. She, on top that, offered joint “anti-terrorism operations” to the genocidal Myanmar army that have been slaughtering our brothers and sisters! On August 28, 2017, Bangladesh foreign ministry sent a formal proposal to Myanmar Embassy in Dhaka expressing Bangladesh’s interest to help the Myanmar army combating so-called “Islamic Extremism”. This government is concerned about the security of Myanmar, but pays no heed to the plight of Myanmar’s 1.1 million persecuted Rohingya Muslims who have been seeing some of the worst tragic developments in the last few days. And, the role of the nation-state rulers of  the rest of the powerful Muslim world are no less than utter betrayal. All they are doing right now is nothing other than paying mere lip service.

With respect to the current Rohingya crisis, the ground reality in Bangladesh is being reflective of the fact that Ummah is totally detached from her low-life rulers. Even though Sheikh Hasina shamelessly ordered to push back the fleeing Rohingya, local villagers, who themselves live from hand to mouth, are extending their helping hands to their brothers and sisters with food, water and other life-saving materials [The Daily Star, August 27, 2017]! Even for the last couple of days, BGB soldiers are also violating government order and letting the Rohingyas enter our territory. This shows that the Ummah’s emotion goes just the opposite direction of what our rulers had really wished for. The sense of brotherhood, i.e. one Ummah, transcends all the artificial thoughts that are being infused into us by our nation-state leaders.

The Rohingya crisis once again reminds us that it is high time we got rid of the illegitimate rulers like Hasina who have been imposed on us by the filthy Western powers. Lackey Hasina, like her other counterparts of the colonized Muslim lands, wants to protect the “nation-state” construct that have been invented by her colonialist masters. When Rasulullah ﷺ reminded us about holding the feelings of ‘one Ummah’, which transcends the artificial land boundaries, by saying: «المُسْلِمُ أَخُو المُسْلِمِ، لاَ يَظْلِمُهُ وَلاَ يُسْلِمُهُ» “A Muslim is a brother of another Muslim, so he should not oppress him, nor should he hand him over to an oppressor” [Bukhari]. Hasina wants us to carry the nationalist spirit, which is categorically Haram in Islam. And indeed, this blessed Ummah has once again proved that their aspiration and feelings are opposite to what is being carried by Hasina and her like who can send thousands of troops to join the Kuffar’s war in the name of so-called UN peacekeeping mission, but cannot dispatch a powerful contingent to conquer Myanmar to bring permanent end to the crisis of the neighboring fellow Muslims! Hence, this is the trying times for our sincere military. They should fear Allah and the du’a of the oppressed Rohingya Muslims and come forward to help their brothers and sisters who are being slaughtered in broad day light! Only they have the material power to uproot this false nation-state model and bring back the promised second Righteous Khilafah upon the method of the Prophethood– the Khilafah (Caliphate) that always defended the honor of the Muslims, totally ignoring the geographical boundaries and borders.