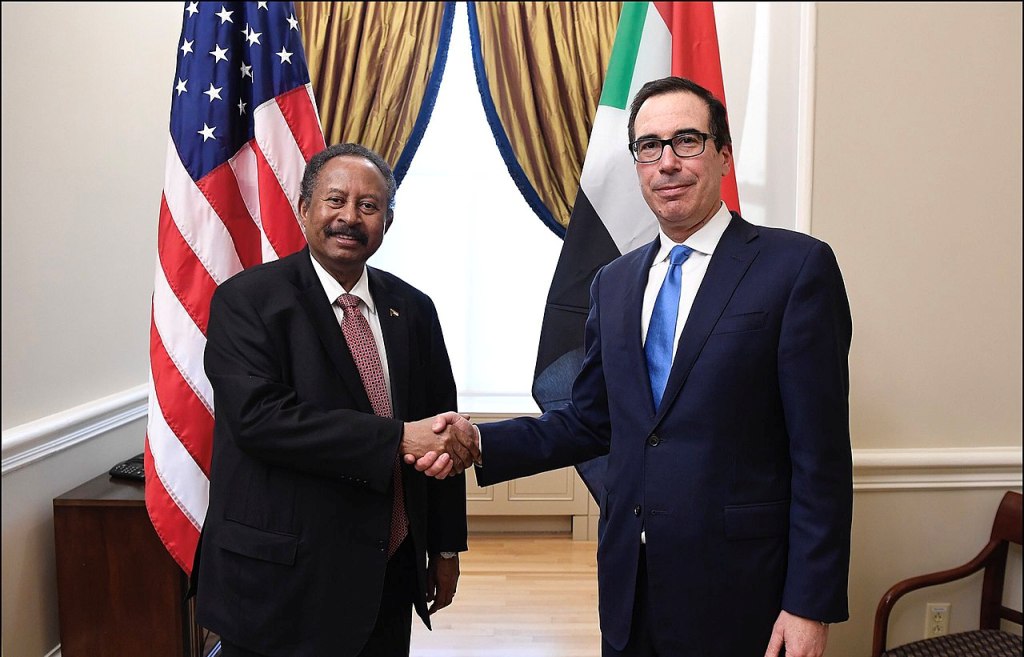 So What Are You Going To Do, O Muslims?

The Prime Minister of the Transitional Government, Abdalla Hamdok, and the Chairman of the Sudan People’s Liberation Movement/North, Abdel Aziz Al-Hilu, signed in the Ethiopian capital on Friday 4/9/2020, a declaration of principles consisting of six articles, and from what was stated in it: Clause (3): (The constitution must be based on the principles of “separating religion from the state,” and in the absence of this principle, the right to self-determination must be respected), Article (4): (The inhabitants of the Nuba Mountains and Blue Nile shall maintain the status quo, which includes self-protection until security arrangements are agreed upon by the parties to the conflict. and until “the separation of religion from the state” is achieved). (Al-Sudani newspaper website 4/9/2020 CE).

We in Hizb ut Tahrir / Wilayah of Sudan want to clarify the following facts:

First: The Transitional Government, the defunct government, leaders of armed movements and opposition parties; are all equally linked to the kaffir West, therefore they constitute its tools that implement its agenda. They use them to ignite fires and crises, and then use the solution for the crisis as a tool to achieve its goals, on top of which comes preventing the Ummah from returning to Islam by implementing its rulings, and that requires keeping Muslims under the shadow of the kufr regimes. Rather, the doctrine of kufr (separation of religion from the state)!!

Second: The doctrine of separating religion from life, including the separation of religion from the state; is the doctrine of the kaffir West on which it founded its deviant civilization, that will fall by the establishment of the Khilafah Rashida (rightly guided Caliphate) on the method of Prophethood, that terrifies the kaffir West, and whose date is near!! As for the Islamic doctrine, it is a complete system of life that connects it to what came before it, i.e. to the Creator who created it from nothing, and to what comes after life on the Day of Judgment, and there is no system, action or saying that is not according to the rules of the true Shariah. Allah (swt) says: قُلْ إِنَّ صَلَاتِي وَنُسُكِي وَمَحْيَايَ وَمَمَاتِي لِلَّهِ رَبِّ الْعَالَمِينَ “Say, “Indeed, my prayer, my rites of sacrifice, my living and my dying are for Allah, Lord of the worlds” [Al-An’am: 162].

Allah (swt) says: فَلَا وَرَبِّكَ لَا يُؤْمِنُونَ حَتَّى يُحَكِّمُوكَ فِيمَا شَجَرَ بَيْنَهُمْ “But no, by your Lord, they will not [truly] believe until they make you, [O Muhammad], judge concerning that over which they dispute among themselves” [An-Nisa: 65].

Third: The state in Sudan, since the alleged independence, has been based on the separation of religion from life. All life systems, legislations and penal code are legislated by the parliamentary majority, without regard to the Shariah ruling that is adopted by the strength of the evidence. So why then does Hamdok and Al-Hilu insist on the text of a constitution that is primarily based on the doctrine of the kaffir West (separation of religion from the state)? Because they are agents of the kaffir West, and they do not want to follow any Shariah ruling in any aspect of life, they want them replaced by rulings from the kaffir West, without regard to the feelings and beliefs of Muslims. This is achieved by abolishing the remaining Shariah limits of the criminal law, represented in cutting off the hand of the thief, and others and changing the rules of inheritance through imposing the equality of women with men, and the legalization of the civil marriage contract, instead of the Shariah contract, and others, which explains the transitional government’s eagerness to legislate to empty the laws from Shariah rulings.

O Muslims: The Transitional Government continues to provoke you and trample upon your feelings. It is working night and day to please the colonial Kuffar, it will not rest until it removes all the Shariah rulings from your life, it is proceeding by following the incitements of the West until it intervenes in your bedrooms. All this so that it can submit its report to its master to show that you are disciplined by the CEDAW agreement; that is, you all entered into the civilization of the kaffir West. So, what are you going to do??

They are the enemy, and the wolf is not blamed for his action on the sheep. Since in the first time you accepted that you should be ruled by other than what Allah (swt) has revealed, so, now rise to the obedience of Allah (swt), so that we uproot the kaffir western civilization from its roots, and throw it and its agents in its dark face, and regain the initiative to carry the civilization of Islam to the people around the globe; This is achieved by working to resume the Islamic way of life. by establishing Khilafah Rashida (rightly guided Caliphate) on the method of Prophethood, so be among the workers for it, absolving the sin and seeking a decent life in the shadow of a great state, whose leaders are righteous, quick to obey and support Allah (swt), and Allah (swt) will support them over their enemy.