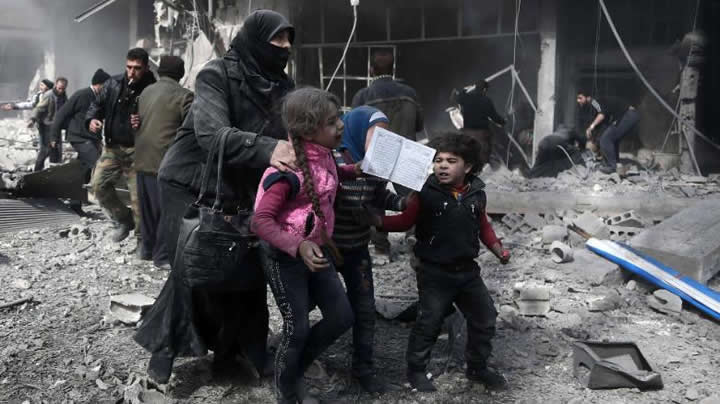 Official media and social media sites reported the horrific images of the shelling, burning and annihilation of more than 400,000 Muslims in Eastern Ghouta. Hadi al-Abdullah, a Syrian activist, said on his Facebook account: “They are unable to count the martyrs. In two days more than 200 martyrs fell”.

Comment:
East Ghouta: the land of the great the battle as described by the Messenger of Allah (saw), and the regime’s food basket and a strategic location which it seeks to control for years to maintain the supply routes and secure protection for Damascus Airport from the bombing of the revolutionaries. The land of the battle, whose people are brutally exterminated, calling for likening it to what was happening in Chechnya’s Grozny by the Russians years ago.

Is Aleppo scenario repeated? Is it a plan to bring back what happened in Grozny? With such headlines, Al Jazeera wonders what is going on. As if the horror that reached the rest of the body of the Ummah is not enough for it to bring down the morale with such headlines which indicate, even indirectly, at the outcome of a decisive defeat as before!

Woeful images emerge from Ghouta as they emerged from Aleppo and Homs. This time, however, the brutality of the regime and its cronies outweigh its predecessors, as the activists say. A fetus whose mother was burned came to the world dead, deformed burned after the mother’s skin ruptured. A barrel pierced in the chest of a child who is not more than ten years old, his guilt is that he is a Muslim, to whom the hatred of the people of the earth of the Christians, the Magians and the Jews was poured…

There is no despair and no weakness. So, we regard them, and Allah is their accountant. Videos reach us of women who have taken up arms and formed combat battalions along with men, and a mother who has just lost her dear son goes out to the front.

This determination, telling the reality of the situation truthfully, does not falsify the facts and does not burden the people of Ash-Sham more than what they can bear. Yes, they are steadfast, determined, and continue in their jihad. But they are also part of a great Ummah that is ashamed of its armies and their people of power to let them suffer without rescuing them, instead hands them to the murderer, who defiles their honors and flesh amidst silence and subservience.

The women who came out carrying arms, they also went out shouting: We are the daughters of the Ummah of Muhammad, we are Muslim women, so where is the Ummah of Islam and where are the Muslims armies?!

Sore cries anguished the hearts of Muslims who are able only to speak. And here we are who ache for the burning and submitting of Ghouta: We cry out with the women of Ghouta the Muslims armies … to heed the call of Allah and support Allah’s servants. For by Allah it is: either the honor in both abodes or the disgrace and humiliation in this world and the painful torment in the Hereafter:

“If you do not go forth, He will punish you with a painful punishment and will replace you with another people, and you will not harm Him at all. And Allah is over all things competent.”
[At-Tawba: 39]