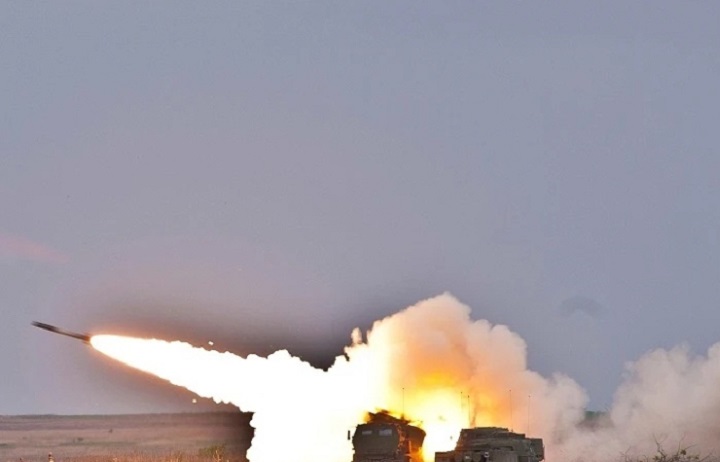 Also, Germany, according to Lambrecht, is preparing to transfer three self-propelled artillery mounts and IRIS-T air defense systems to Ukraine in the fall.

Today, we can say with confidence that over the past month and a half, Germany and France have completely abandoned their independent policy in the Ukrainian crisis, having decided to submit to the American plan. This plan, as well known, is to defeat the Russian military machine and bring Russia to a state in which it can never threaten the world with military force.

At June 16, 2022 three influential European politicians arrived in Ukraine at once: French President Emanuel Macron, German Chancellor Olaf Scholz and Italian Prime Minister Mario Draghi. All three of these leaders at that time openly advocated a diplomatic settlement of Russia’s war against Ukraine. Germany, in addition to this, held back the supply of heavy weapons. Despite the fact that the official purpose of the visit was to discuss the prospects for Ukraine’s membership in the EU, many analysts argued that Macron and Scholz were going to convince Ukrainian President Zelensky to make concessions to Russia.

However, the official statements of the parties after this visit made it clear that no progress has been made in this direction.

The Ukrainian side prudently, prior to the start of official negotiations, conducted a tour for guests to the cities of Irpin and Bucha, where Russian troops committed terrible crimes in the first months of the Ukrainian-Russian war.

Apparently, after this visit to Kyiv, the EU locomotive countries were finally convinced that it was impossible to persuade the Ukrainian authorities to negotiate with Russia. Mario Draggi’s settlement plan was finally rejected even by those who supported him.

For example, French President Emmanuel Macron said on June 28, at a press conference following the summit of the Group of Seven (G7), the following:

“Russia cannot and must not win. Our support for Ukraine and our sanctions against Russia will continue for as long as necessary and with the necessary intensity – the coming weeks and months … Therefore, we will continue sanctions, continue to support Ukraine and its people in order to achieve a complete victory for Ukraine and negotiations at that time and at those conditions that the Ukrainians themselves will choose”.

Two days earlier, at the beginning of this summit, there was an incident when the heads of the G7, at the suggestion of British Prime Minister Boris Johnson, ridiculed Vladimir Putin for his photo shoot with a naked torso.

“We must avoid the mistakes made after the 2008 crisis. The energy crisis cannot lead to the return of populism.”

“We have to cut our funding to Russia…,” he said.

On June 28, a NATO summit was held in Madrid, at which a decision was made on the entry of Sweden and Finland into this alliance.

According to NATO Secretary General Jens Stoltenberg, Russian President Vladimir Putin will now get more NATO on the border with Russia and the inclusion of these countries in the alliance will radically change the situation in the Baltic region. The day before, the Secretary General of the organization spoke about plans to increase the number of rapid reaction forces in the eastern part of the alliance by 7.5 times.

Russia’s response to this NATO expansion has been unprecedentedly pathetic.

Russian President Putin said that Russia does not have any problems with Sweden and Finland that could worry Moscow in the event of their membership in NATO.

“We have no problems with Sweden and Finland, which we have with Ukraine. If they want to join NATO, please,” Putin said.

Thus, one of the main goals of the invasion of Ukraine – the desire to prevent the expansion of NATO, was consigned to oblivion by the Russian authorities.

At the beginning of the conflict, Putin stated that Russia would consider as a legitimate target anyone who would prevent Russia from achieving the goals of the so-called military special operation. Today we see that almost all countries of the Western world supply Ukraine with all types of weapons. Now it is said about supply of modern Western air defense systems to Ukraine, as well as aviation.

The Ukrainian army is moving to NATO standards with great speed, because the countries of the alliance not only supply Western weapons, but also train Ukrainian soldiers. Thus, the UK has already begun training 10,000 Ukrainian soldiers at its training grounds.

Thus, the United States, with the help of its ally Britain, managed to completely subjugate the leading countries of the European Union to its will and policy. All attempts by Germany and France to pursue an independent policy are coming to naught. The United States, in turn, seems to be in no hurry to quickly resolve the Ukrainian conflict, because it has certain plans for the EU and China; the implementation of which takes time.

Speaking about the situation in the military theater, it should be noted that despite some tactical successes, strategically, Russia is undoubtedly losing ground.

The Ukrainian military is already openly discussing the issue of the return of Crimea by force, as well as missile strikes on the Crimean bridge, which is the main symbol of Crimea joining Russia.

A few weeks ago, the Ukrainian authorities announced that they would liberate the Kherson region, located in the south of the country.

For Russia, any defeat and retreat creates huge problems and risks both within the country and in the international arena. Therefore, it will try with all its might to keep the right bank of Dnieper River in the Kherson region, which was initially unpromising for itself, concentrating a huge amount of its military forces there.

The intensification of hostilities in southern Ukraine will mean that Russia will postpone the main task of its so-called special military operation, complete capture of Donbass. The retention of the right bank of the Kherson region in the hands of Russia looks unlikely due to the fact that the Ukrainian military has almost completely destroyed the bridges that ensured the transfer of Russian troops from the left to the right bank of the Dnieper in this area.

Thus, the more important goals for Russia in relation to the Ukrainian Donbass fall prey to ambitions and unwillingness to lose the less important Kherson region. In this chess game, Russia, trying to keep a pawn, will lose a queen.

Separately, it is worth mentioning that the war in Ukraine debunked the myth about the strength of the Russian army, as well as the power of its weapons.

Ukraine strikes with American HIMARS on Russian S300 and S400 air defense systems, which Russia claimed to shoot down absolutely any air targets.

The Russian military-industrial complex became a laughingstock when footage of an attack on the Antonov Bridge in Kherson, where Russian air defense missiles take off to intercept targets after the last round had already hit the target, circulated on the Internet.

Undoubtedly, this is a blow to the image of Russia, whose weapons were in demand for dictators in the Middle East, whose sales accounted for a significant part of the income from military exports.

Russia’s actions in this conflict no longer have any significant impact; they are reactionary and completely limited to self-defense. It will be extremely difficult for Russia to get rid of such a fate, given the catastrophic ideological weakness.

The main beneficiary today is the United States. Through Russian aggression, the United States is laying the foundation for a powerful pro-American force within the European Union in the person of Ukraine, because in the case of a victory over Russia, pro-American Ukraine will undoubtedly be accepted into both NATO and the EU.