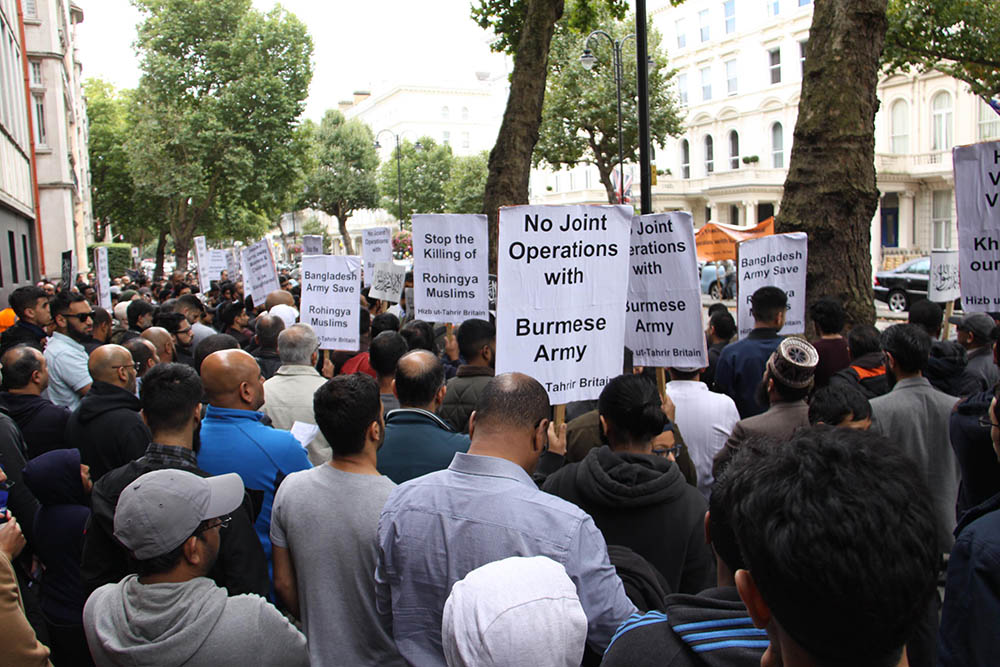 The BBC reported on the 13th of September, 2017, that “Myanmar’s de facto leader Aung San Suu Kyi is to miss a key UN debate next week as criticism grows of her handling of the refugee crisis involving the Rohingya Muslim minority.” About 370,000 Rohingyas have fled to Bangladesh since the 25th of August on account of savage attacks on Muslim villagers and their villages. The Myanmar government has denied UN claims that ethnic cleansing is being organized against the Muslim Rohingyas, but a BBC reporter was able to witness one instance of ethnic cleansing first-hand. The BBC report criticized Ms Aung San Suu Kyi, who holds a Nobel peace prize, for not standing up since her election victory to defend the Rohingya, who have been subjected to waves of ethnic cleansing and constant discrimination and oppression over the years. However, the BBC sympathized with her difficulty in standing-up to the deeply held racial hatred expressed by the Buddhist majority of Myanmar towards the Muslim minority Rohingya.

The western media ask if Ms Suu Kyi should be stripped of her Nobel Prize for her failure to stop the ethnic cleansing and her belittling the suffering of the Rohingya. She blamed a “huge iceberg of misinformation” for distorting the scale of the problem, despite the fact that nearly 400,000 refugees have fled to neighboring Bangladesh to join the hundreds of thousands of refugees driven out in earlier rounds of genocidal savagery. Many Rohingya are trapped in the border area, surrounded by mines that the Myanmar military have laid to prevent their return, while others have drowned at sea in desperate attempts to escape in flimsy boats.

The UN Secretary General, Antonio Guterres, said “the humanitarian situation it is catastrophic”, and when asked if ethnic cleansing was occurring, he replied: “A third of the [Rohingya] population had to flee the country – can you find a better word to describe it?” Therefore, when the United Nations meets next week, with or without Ms Suu Kyi, words of condemnation are expected, along with warnings of the growing humanitarian crisis in the desperately overcrowded camps in Bangladesh. Pledges of aid supplies may follow from some member states. However, the US, the EU states and China will be notably muted, as Myanmar’s economy is in the process of being liberalized, slowly, and the major capitalist economies do not wish to spoil the opportunities for investment by pressuring what they call ‘a fragile emerging democracy.’ There will be criticism, certainly, but there will also be enough patience with Myanmar to drown out the cries for help from the Rohingya, and the corrupted leaders of the Muslim world will issue warnings, as usual, without taking the actions that Islam requires of them.

The proverbial elephant in the room, however, is the dangerous concept of the ‘nation state’, that underpins the Western conception of world order and the institutions, such as the United Nations, that are designed to support it. The concept of statehood based upon the sense of ‘nationality’ has ensured death and destruction throughout the world. It was the driving power of Germany’s National Socialism that led to the second world war and genocide in Europe; it reared its head again in Europe after the break-up of the Soviet Union and resulted in the civil war of former Yugoslavia and the genocide of Muslims in Bosnia; it is being exploited by Russia in the destabilization of Ukraine, and it led to the massacre of ethnic Tutsis in Rwanda.

The head of Myanmar’s armed forces, Gen Min Aung Hlaing, said that “Rakhine ethnics [Buddhists] are our indigenous people who had long been living there since the time of their forefathers,” and having thus defined the essence of Myanmar’s nationhood he affirmed that the country “could not accept and recognise the term ‘Rohingya’ by hiding the truth.”  The truth, in the view of the Buddhist ruling majority is that the Rohingya are illegal immigrants from Bangladesh. Such views are not essentially different to those of the current US administration in its threats to build walls to keep out Mexican immigrants and to chase illegal immigrants out of the US in order to ‘make America great again’. Nationalism as the basis for statehood is a divisive and savage intellectual construction that has caused endless human misery and upheaval. The UK has initiated a painful breakaway from the European Union because of the fear of dilution of the ‘nation’ that came with membership of the EU.

Only the Islamic ideology holds the potential for molding different races together in a harmonious and progressive unity, and yet it is Muslims who now are suffering most greatly from the evil of this Western theory of statehood. It rests upon our own shoulders to lift ourselves and the rest of the world from this most inhuman of woes, and the United Nations can never do this for us because it is built upon the very idea that leads to the misery, which it will condemn most vainly when it meets next week.