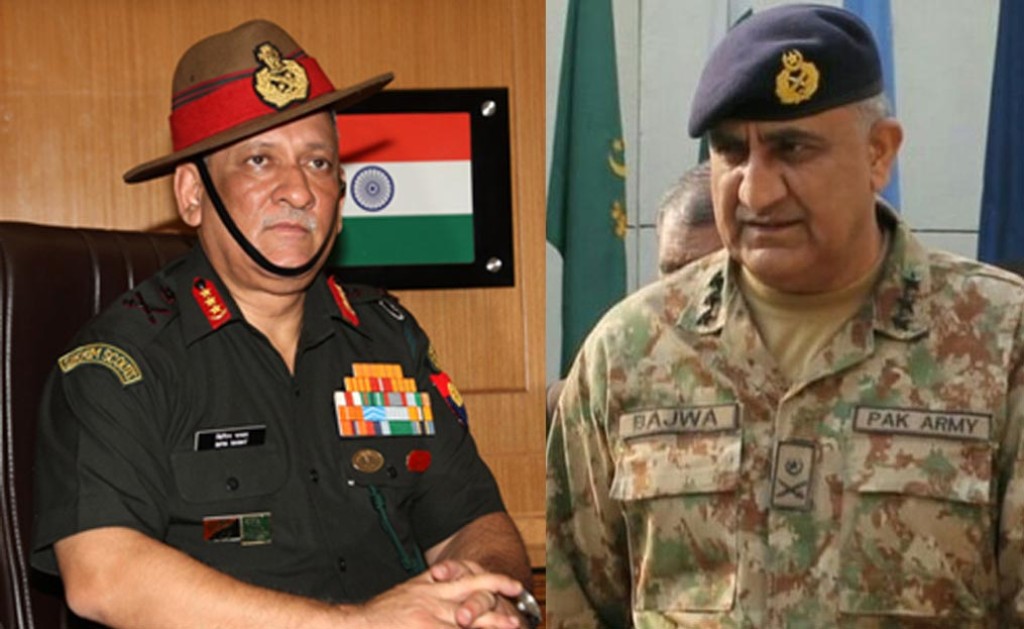 The unilateral Indian action to revoke article 370 and 35A, abrogating Kashmir’s special position in India, has presented a problem for Pakistan, its ruling elite and specifically the Chief of Army Staff, General Bajwa. There is a unique parallel between this and the crisis faced by Musharraf, for both crises are reflected in the implementation of a strategic US plan.

Musharraf was required to establish a US military footprint and a satellite government in Afghanistan that was not under any direct influence of Pakistan. Bajwa is required to enable Indian success in the revoking of article 370 and 35A, and beyond that to enable the Indian army to quell any rebellion within the Kashmiris against the constitutional change.  Hence, one removed our ties to Afghanistan, and the other will remove our influence in Kashmir and throw that on India. Hence, the challenge both Musharraf and Bajwa faced is the need to deceive the Ummah into thinking that they are saving the country.

There was a deep dislike of the decision of Musharraf to provide the US unstinted support, both within the armed forces and in the Ummah. However, the regime pushed the idea of Pakistan first to deceive the Muslims, maintaining that a confrontation with the US would have not been possible. However, there were principled officers like General Muzaffar Usmani and General Mahmood who severely criticized Musharraf and bore the consequences, indicating that a variant course was perfectly possible. Hence, Musharraf clothed his treachery in the robes of survival, and was successful in implementing the US plan for Afghanistan. In his speech, Musharraf justified joining the US led coalition based on “…our sovereignty, second our economy, third our strategic assets (nuclear and missiles), and forth our Kashmir cause”.  The lie surrounding those four conditions are clear for all to see.

The crisis facing Bajwa is far more serious as he is required to confront the Indian aggression in Kashmir; something that not only the Pakistani Army has been brought up on but all the Muslims of Pakistan. Hence, the dilemma for Bajwa is how to clothe his treachery in arguments and narratives that not only achieve the US plan, but also survive. The dilemma he faces is much more severe in that there are no inherent feelings against Jihad against India. From this perspective, Bajwa and Imran Khan have had to craft a very careful strategy to deceive the Ummah. The following is a discussion of the treachery committed to convince the Ummah that they cannot reverse India’s actions on 370.

The revoking of Article 370 and 35A was part of the BJP manifesto and a principle component of BJP’s campaign. Hence, the action should have been expected by the civil and military leaderships, but not necessarily the timing. It was reported that[1] “In February 16th 2019, two days after the Pulwama attack (14th February), India’s National Security Adviser Ajit Doval had phoned his US counterpart John Bolton of plans to do away with the special status.”

Hence, the US was aware of India’s plans. After the Balakot incident and the downing of two Indian planes, the Pakistani urgency to return the captured pilot, Abhinandhan, was to prevent the issue from becoming volatile and uncontrollable in both Pakistan and Occupied Kashmir. If the Pakistani establishment had prolonged the affair, then emotions would have been high here as well as IOK, and the Ummah would have potentially forced military action. In an article published in the Times of India[2] on April 8th 2019, Peoples Democratic Party (PDP) president Mehbooba Mufti “…warned that abrogating Article 370 would lead to freedom for the state from India.”

Hence it was open to all that the BJP were preparing to revoke article 370. Even the National Conference (NC) party president Farooq Abdullah both warned Prime Minister Narendra Modi not to tinker with article 370. So whilst the US is an unreliable ally, Bajwa has to contend with the criticism of what were the Indian Desks of the foreign office and the ISI doing when these Indian activities were ongoing. This has parallels with the fiasco surrounding the US unilateral violation of Pakistani sovereignty to (supposedly) kill Osama bin Laden in Abbotabad. This is not lapse, but complicity.

Prime Minister Imran Khan departed on Saturday 20th July 2019 to the United States, accompanied by the Chief of Army Staff Qamar Javed Bajwa, Director General Inter-Services Intelligence (ISI) Lieutenant-General Faiz Hameed, Advisor to PM on Finance Hafeez Shaikh, and the Advisor to PM on Commerce, Abdul Razak Dawood, whilst Foreign Minister Shah Mahmood Qureshi was already in Washington. The July 22nd 2019 meetings between Bajwa, Imran Khan and US President Trump seemed to focus primarily on the Pakistani economy, Afghanistan and the need to curb Jihadi groups and activities. The post meeting briefings as reported by a senior State Department official[3] revealed that, “Pakistan has undertaken obligations to the international community under the Financial Action Task Force, and has agreed to a series of steps that intend to implement counter terrorism financing, to ensure the arrest and prosecution of individuals implicated in terrorist and extremist activities, a senior State Department official said here yesterday…There is an action plan, it’s discreet, it’s tangible, it’s measurable…and underscored that FATF obligations were part of the prime minister’s ‘Naya Pakistan’ vision and what he had laid out for his government. The official further stated that: “…the suspension of military assistance, reduction in civilian assistance, the tenor of our diplomatic engagement over the past two years has reflected the priority this administration attaches – which is very much a shared objective of India, of the region, of the international community.”

The presence of ISI chief, as well as Abdul Hafeez Shaikh is telling. Trumps lack of subtlety is indicated by his offer of mediation on Kashmir during the talks. He stated[4]: “I was with Prime Minister Modi two weeks ago and we talked about this subject and he actually said ‘Would you like to be a mediator or arbitrator’, I said ‘Where’, He said ‘Kashmir’. Because this has been going on for many, many years.”

Significantly, the first reported Indian troop reinforcements in Jammu and Kashmir occurred post 26th July 2019, 3 days after the Imran Khan-Trump meeting in Washington. Over the course of the next week or so, almost 100,000 Indian troops were transferred to Jammu and Kashmir. On the same day that the Indian government revoked article 370 and 35A on 5th August 2019, the US FATF experts’ team was flying into Islamabad, overtly to ensure that the Pakistani submitted a report on the 13th of August. On the 6th of August, International Monetary Fund Resident Representative Teresa Daban stated at a press conference that: “Failure to exit from the FATF grey list is a risk to the recently approved $6 billion IMF deal,” further stating…“The IMF is responsible for the financial system stability and the FATF-related issues hamper taxation and undermine banking system.”

The timing (a day after the August 5th Indian action) was not to ensure that the Army did not consider employing Jihadi assets post 5th August. Bajwa’s compliance was already there, but rather, the intensity provided Bajwa with a fig leaf for the defensive posture taken. This was to support the disinformation strategy within the influential circles, that our economy is not in a position to sustain any aggressive activity, to the point that even the IMF loan is dependent on this. So the evidences quoted above indicate a continuum of pressure from the US. And the evidence that India had informed the US of its plans to revoke article 370 and 35A, two days after the Pulwama attack[5],  lends support to the criticism that the US and Bajwa were working hand in hand.

For what principle will the army engage in war? If we look across the border, the simple Taliban have understood precisely what to fight for and the sacrifices required. Have they not humbled the US? Why can we not humble India? The strength in the Mujahedeen lies in their commitment to abide by Jihad, the hukm of Allah. Through the conviction in this law, the Mujahedeen look for the way to implement the Hukm of Jihad, extending to not just mere skirmish fighting, but beyond to full asymmetric military war. It is the same attitude that led the Muslims victory at Badr, Uhud, Ahzab, Qadisiyya and so on. It is the absence of this mentality that is the cause of our weakness. It is upon the Muslims to work for the re-establishment of the Khilafah (Caliphate) on the Method of Prophethood, so that the Muslims have a leadership that leads us from one victory to another. Allah (swt) said, فَلاَ تَهِنُوا وَتَدْعُوا إِلَى السَّلْمِ وَأَنْتُمْ الأَعْلَوْنَ وَاللَّهُ مَعَكُمْ وَلَنْ يَتِرَكُمْ أَعْمَالَكُمْ “Be not weary and faint-hearted, crying for peace, when you are the uppermost: for Allah is with you, and will never put you in loss for your (good) deeds.” [Surah Muhammad 47:35]. And RasuAllah ﷺ said, «مَا تَرَكَ قَوْمٌ الْجِهَادَ إلاّ ذُلّوا» “No people abandon Jihad except that they are humiliated.” [Ahmad]