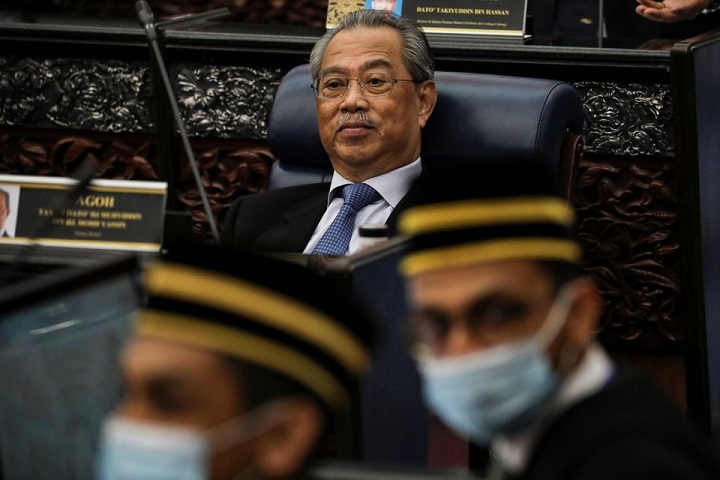 Malaysia’s embattled Prime Minister Muhyiddin Yassin on Wednesday insisted he still had the support necessary to lead the country after members of his key coalition ally said they would no longer back him following a rare rebuke from the king, amid continuing political tension in the midst of a surging coronavirus pandemic.

Muhyiddin, whose fragile Perikatan Nasional administration has been under almost constant pressure since he was named prime minister in March 2020, said in a televised address that he still had the backing of a majority of the country’s 222 members of parliament and that his legitimacy to lead would be put to the test once parliament reconvened next month. (Source: Aljazeera.com)

Comment:
Democracy is a dud. Dangerous even. It puts society in the hands of ego-centric politicians, and exposes the nation to foreign manipulation and menace. It has become the favourite ‘open door’ to meddling authoritarian regimes, and neo-colonialists puppeteers. Just ask Malaysia.

Democracy lets the neo-colonialists in. There is evidence that foreign governments are supporting and coordinating with opposition politicians and ‘independent’ NGOs. This opposition, is a transactional coalition of convenience, not principles. They come from opposite sides of the ideological map. Racists and misoislamists are getting into bed with Malay nationalists and liberalists. There is no alternative vision, new set of principles. No new way. Nothing. Indeed the very existence of such a coalition betrays unprincipled duplicity, and a willingness to abandon all ideals. These former enemies are cooperating to dislodge a government already heavily engaged on two fronts: internally – against the Indian Delta-variant, and externally, ‘managing’ China’s wholesale invasion of her seas and hydrocarbon resources.

The US benefits if they succeed in installing their puppets. China benefits from a weak, recreant ASEAN nation.

Democracy puts the ‘opposition’, in opposition to the welfare of the people. Malaysia needs a strong united front, focused on fighting Covid and saving the people and economy. However, the opposition must engender turmoil. For if the government succeeds in taming the Indian Delta-variant, (and very few governments have, even with a vaccine programme) the opposition’s power grab could lose steam.

US opposition politicians, have also politicised Covid, to the detriment of their own people and children.

Why is democracy defective? Because it confuses the right and capability to select a leader, with the competence and authority to legislate laws for life and society. Everyone votes for their own selfish interest. Unbridled, democracies push toward short-sighted, material self-gratification. Just because we like or want something, it does not translate it to being good for the individual or society.

In 2017, Trump, a lying, racist, anti-Islamic and alleged tax-dodging shyster, became the duly elected president of the world’s most powerful, wealthy and connected, democracy. And despite losing, he still wields influence over almost half of the US electorate.

Hate, fear, and racism sells. In democracies, facts and truth are malleable. Good and bad, right and wrong, interchangeable. It’s no wonder ‘liberal and enlightened’ democracies breed ignorance and fascism, and have some of the most intolerant, hypocritical, neo-colonialist governments in the world. Liberal secularism is rotting from the inside.

Islam has a better way. It does not resort to lies, bigotry and hatred. Islam distinguishes the election of a good leader from the establishment of principles and laws that underpins a just and progressive nation. It does not permit even the taint of corruption nor the interference of enemy states. Islam’s unique ruling system and election process for the Amir ul-Mu’mineen ensures a stable and powerful unitary leadership for the whole of the Ummah and all citizens regardless of race or creed.

With all the disasters that we are already facing at the hands of neo-colonialists, we cannot allow ourselves to be taken in by their chaotic and broken system. It is not fit for any nation, let alone the Islamic Ummah.