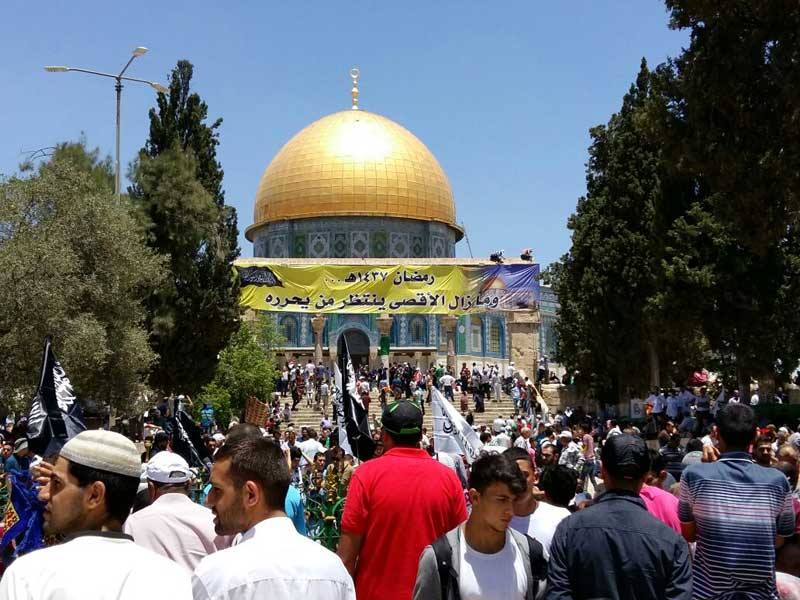 We are living in an era of deep darkness. The resources of the world are on the whole consumed by those that possess the least and produce the least. The world’s political system is such that it seems that nothing can break the status quo of Western hegemony. The cycle of wars and treaties, and treaties and wars, throughout the twentieth and twenty-first centuries has ensured that international bodies work only to maintain the dominance of the Western powers. They have an economic strangle hold on the Islamic world. Whilst they exploit the rest of the world, the West themselves are slowly sinking into a pit of self-destruction of crime, delinquency, violence and corruption.

Adding to this state of darkness is the condition of the affairs of ruling in the Muslim world, characterised by corruption, nepotism, tribalism and self-serving political models, serving only wealthy political elite families. This can be seen in different regions across the Islamic world like in Egypt where President Sisi has via a so-called referendum forced his military oppressive dictatorial rule upon the people of Egypt for the next decade. In Saudi Arabia, the clan that protects much publicised US economic and security interests, maintained and upheld by the obedient Crown Prince MBS. In Syria, the evil Assad regime, backed by the Russian military, have bombed, starved and slaughtered Syria and its peoples into an oblivion for the last eight years, massacring men, women and children rather than relinquish its hold on power. In Indonesia, through the democratic republic man made political system that separates religion from life with sovereignty being for the people, Jokowi seeks to cement his presidential power upon China’s Belt and Road agenda.

This dark era in which the Ummah finds itself isn’t due to the absence of detailed guidance and knowledge concerning a political ruling system based on principled Islamic values and beliefs. For indeed, the time of the Arabian Peninsula in the seventh century is clearly a bygone era where the ruling system was an unorganised tribal structure devoid of any king of state structure or progressive civilisation. The focal point was Makkah, where a host of shrines manifested by idols were built around the Ka’abah. The leadership of Makkah was in the hands of the Quraysh, the legal custodians of the holy shrines, with Bani Hashim assuming a de-facto leadership role in Makkah. Tribalism was the basis of the Arab way of life. An Arab maxim was: stand by your brother, be he the oppressor or the oppressed. Each considered themselves from the noblest stock. Some families thought it degrading to participate with others even in religious congregations. Inter-tribal feuding was constantly taking place, which was further exacerbated by the war like tendencies of the tribes. An Arab poet once wrote: “If an enemy tribe we do not find, We go to war with a friendly tribe, And our lust for war is quenched.”

However, it is the Islamic Ruling System that delivered not only the Arabian Peninsula but all of mankind from darkness which is based upon a unique system of unity ordained by Allah (swt). It is not a federal, democratic, republican, monarchial or dictatorial system at all. It has no similarity to any man-made ideology. The Islamic State considers people under its authority as citizens, whether they are Muslims or non-Muslims. All have their rights guaranteed by Islam. There is no concept of ‘ethnic minority’ as people are not discriminated against at all due to their colour, race or religion.

The Khilafah (Caliphate) is not an empire, like the old British or French colonialists who stole the wealth of other nations and returned them to their capitals. In all places that were occupied by non-Muslims, the inhabitants curse their occupiers, while in areas that were opened to Islam, the people still long for its return, and are prepared even to die to achieve it.

The job of looking after the affairs of the Ummah is restricted to the Khaleefah (head of state) and those he delegates to assist him. No other group, individual or organisation can involve themselves in this issue. The centre of decision making, strategy and consultation is done in the capital of the Khilafah. Throughout the history of Islam there have been five main capitals: Madinah, Kufah, Damascus, Baghdad and Istanbul. The leadership of Islam changed from place to place and was held by Muslims of different racial origins throughout the Islamic history. This bears testimony to the fact that the Khilafah is not an imperialistic entity, which steals wealth from other nations to return it to its capital. Its purpose is to convey the Deen of Allah (swt) to all of humankind. Leadership and ruling in an Islamic State is centralised, whereas administration is decentralised. The State is made up of a number of wilayaat (provinces) headed by governors. The main officials of the State are appointed by the Khaleefah. Every decision must emanate from the head of State. This negates any corruption and confusion within the ruling system. The Khaleefah is ultimately responsible. The method of appointing a Khaleefah is through the process of bay’ah (contract between the people and ruler), where the people are to obey the ruler as long as he implements Islam. Nearly one hundred years have passed since the Ummah pledged their obedience to Islamic leadership manifest in the Uthmani Ottoman Khilafah State. For indeed the Ummah yearns for Islamic leadership guarding and implementing the Deen of Islam, caring for the affairs of the Ummah and carrying Islam to the world in accordance with the Prophetic model followed by the noble companions after him ﷺ. Yet the Muslim Ummah for the last 98 years have not had Islamic leadership, the Khilafah (Islamic State) to pledge their obedience to as the hadith clearly describes,  «مَنْ خَلَعَ يَدًا مِنْ طَاعَةٍ لَقِيَ اللَّهَ يَوْمَ الْقِيَامَةِ لَا حُجَّةَ لَهُ وَمَنْ مَاتَ وَلَيْسَ فِي عُنُقِهِ بَيْعَةٌ مَاتَ مِيتَةً جَاهِلِيَّةً»  “Whoever removes his hand from obedience (to the ruler) will meet Allah with no proof for himself, and whoever dies without the pledge of allegiance (to the ruler) upon his neck dies a death of jahiliyya”. (Muslim)

Abu Huraryrah (ra) narrated that the Messenger ﷺ said, «إِنَّمَا الإِمَامُ جُنَّةٌ يُقَاتَلُ مِنْ وَرَائِهِ وَيُتَّقَى بِهِ» “Behold, the Imam is but a shield from behind which the people fight and by which they protect themselves.” (Muslim)

Khaleefah ‘Umar ibn ‘Abdul Aziz was once found by his wife weeping after his prayers; asked if anything had happened to cause him grief, he helped:

“O Fatimah, I have been made the ruler over the Muslims and the strangers and I was thinking of the poor that are starving, and the sick that are destitute, and the naked that are in distress, and the oppressed that are stricken, and the stranger that is in prison, and those of them in counties of the earth and the distant provinces, and i felt that my Lord would ask an account of them at my hands on the day of resurrection, and I feared that no defence would avail me and i wept.”

There is no country existing in the world today that implements the system of government ordered by Islam. Rather, all the Muslims countries in the world are ruled by laws of kufr (non-Islam) even though the majority of their populations are Muslims.

At this juncture in time it is now, more than ever, that humankind is in need of guidance from the darkness into the light, as Allah has stated in the Qur’an; min a-dhulamaati ilan noor (from darkness to light).

“O Prophet! Truly We have sent thee as a Witness, a Bearer of Glad Tidings, and a Warner, and as one who invites to Allah’s (grace) by His leave, and as a lamp spreading light (Siraajan-Munir).”