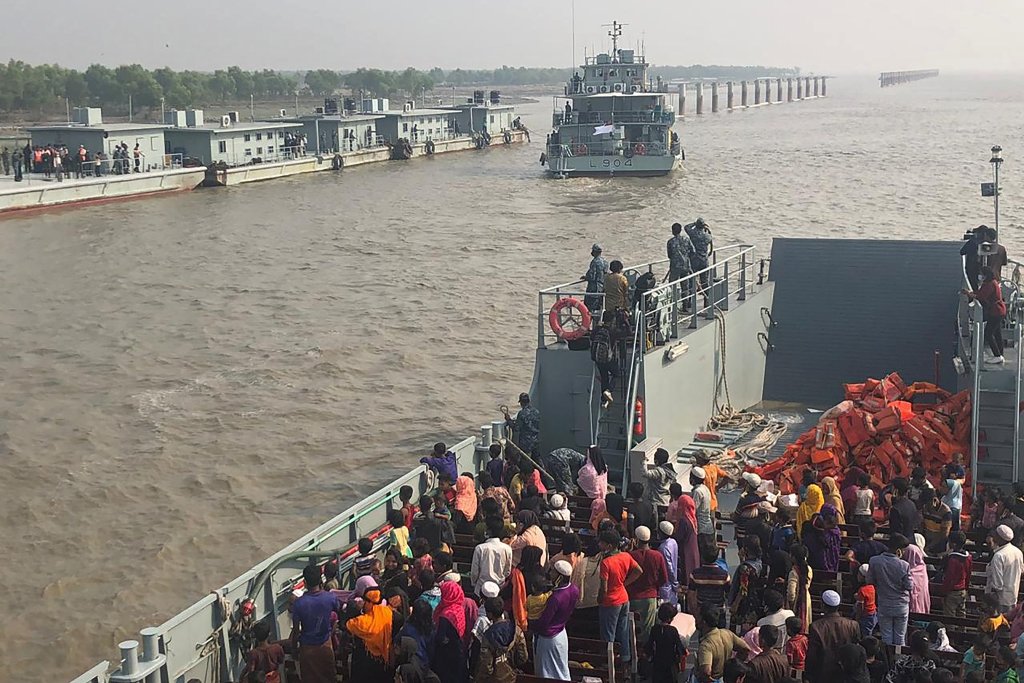 Amid heavy security presence, the ruthless Hasina government has started forced deportation of thousands of Rohingya refugees into an abandoned and flood-prone island, Bhashan Char, in the Bay of Bengal. Three hundred of Rohingya Muslims who have been banished to that unsafe land in last May are already in deplorable conditions. Men, women and even children were beaten with sticks by security officers over there after they went on a hunger strike few months ago for better living conditions (“Rohingya accuse Bangladesh officers of abuse over hunger strike”, Al Jazeera, 8 October 2020).  So, Bhashan Char is essentially a ‘mass detention camp’ where Muslim refugees will be treated like animals. It is nothing short of the then British colonial torture prisons (Kala Paani or ‘dark waters’) in the Andaman and Nicobar Islands, used to imprison for life and punish the dissidents.

The guardian-less Rohingya Muslims have fallen prey to dirty politics of the secular Hasina government. Initially, the government was shutting out the Rohingya refugees fleeing massacre in Myanmar in 2016. But fearing the sentiments of the Muslims in Bangladesh, it was forced to allow them enter. Afterwards, even though it has been looting the so-called relief funds coming in the name of the Rohingya Muslims whereas confining them into squalid camps fitting for animals, this secular government has been tactfully and slowly injecting poisonous xenophobic ideas against those helpless Muslims into the society. On the one hand, ruling party men have been exploiting their misery and forcing them to commit crimes in their course of victimization. On the other hand, the Chanakya Hasina government has been using sycophant intellectuals and sold-out media channels to generate fear and animosity against these victims to justify their deportation to that inaccessible island whose name, Bhasan Char, means ‘flooded island’. Economic worries and survival instincts of the people of Bangladesh are being artificially generated, especially during this Covid-19 scenario, by claiming that this 1 million people will cause food shortages and employment crises in a population of 200 million! As if decades of misrule and plundering of people’s money and resources by the secular regimes have not been enough for us to suffer socio-economic misery! Thus, it is evident that when people of Bangladesh are fed up with the secular ruling, Hasina government is trying to defend its frontier by riding on the back of rotten nationalism. It is going against the command of Allah (swt): وَاِنِ اسۡتَـنۡصَرُوۡكُمۡ فِى الدِّيۡنِ فَعَلَيۡكُمُ النَّصۡرُ “And if they seek help of you for the religion, then you must help.” [Surah Al Anfal: 72] and trying to alienate any brotherly feeling or humanity in our people about these “refugees”. Under the false pretext of nationalism, the regime is trying to make the people forget that these are Muslims in need, and even that there was a time within many of our own lifetimes when allegedly 10 million of our people had become refugees in another country. Also we cannot ignore the fact that by deliberately injecting hatred against the Rohingya Muslims into the political bloodstream of the Muslims in Bangladesh, the traitorous Hasina government is trying to uphold the colonial legacy of ‘Divide and Rule’ to fulfill the agenda of their Western masters to keep this Ummah divided through false colonial-imposed nationalistic borders and have them accept the abandonment of their oppressed Muslim brothers and sisters.

O Muslims, resist this plot of the secular Hasina government to ingrain toxic nationalism into our minds. This evil idea breeds inhumanity and will be used to justify the forced deportation of our persecuted brothers and sisters. Our nation-state rulers are portraying these victims as foreign criminals and inflaming hatred against them simply because they are from a different land, whereas the secular rulers and the ruling party men should be the ones to be banished to the island for their continuous crime and treachery. These treacherous rulers will use every tool available to keep us disunited by races, ethnicities, and geographical locations in service of their colonial masters of the West especially when their masters are fearful about the imminent return of the promised Khilafah Rashidah (rightly guided Caliphate) on the way of Prophethood.

O Muslims, beware! If you cannot free your minds from the shackles and disease of nationalist ideas and struggle to re-establish the Khilafah, the only shield and guardian of the Believers and oppressed, how will we answer to Allah al-Haseeb (the Bringer to Account) when we will be asked about our deeds when the despairing women and children asked for our assistance? The Prophet ﷺ said, «الْمُسْلِمُ أَخُو الْمُسْلِمِ، لَا يَظْلِمُهُ، وَلَا يَخْذُلُهُ» “A Muslim is the brother of a Muslim: he does not oppress him, nor does he abandon him.”