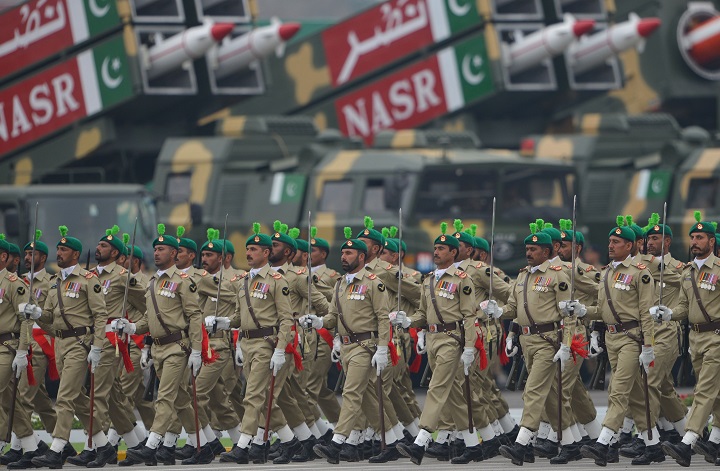 We will never see liberation from slavery to the US, that we so strongly desire, as long as we are ruled by Democracy. It is Democracy that allows its assemblies to pass the dictates, demands, policies and laws that the Western colonialists make to subjugate us. Thus, Pakistan’s economy is subjugated to the dictates of the IMF and FATF, its military to the demands of US CENTCOM and the UN, its education to the policies of USAID and UNESCO and its judiciary to the laws of the ICJ and the British colonialist Raj. Indeed, it is Democracy that ensures our slavery to the US, regardless of who the rulers may be.

It is Democracy that undermines our security through slavery to the demands and dictates of the US State Department, USCENTCOM and the colonialist tool of the US, the UN. It is Democracy that allows Pakistan’s rulers now to pursue appeasement towards India. They maintain strong contact with the Indians through back channels, even whilst Modi brutally oppresses the Muslims of India and Occupied Kashmir and his RAW intelligence strives to creates chaos within Pakistan. It is Democracy that is allowing the Bajwa-Sharif regime to remove Pakistan as an obstacle to India’s rise, so that Modi becomes the American policeman against China and the region’s Muslims. It is Democracy that allows the US to continuously use the “the Boulevard” air corridor above our heads, allowing UCAV combat drones based at the USCENTCOM base in the Gulf to ignite fires of Fitnah along the Durand Line. Indeed, it is Democracy that undermines our security, regardless of who the rulers may be.

It is the Khilafah (Caliphate) on the Method of Prophethood alone that will liberate us from slavery to the US. It is the Khilafah alone that firmly closes the doors to all influence of the colonialists because it will govern us by all that Allah (swt) has revealed. In the Khilafah every law and article of the constitution is derived from the Noble Quran and the Prophetic Sunnah.

Allah (swt) revealed in the Noble Quran, the Book, in which there is no doubt,

“Shall I seek law from other than Allah, when He has revealed to you this Book which is fully detailed?” [TMQ Surah Al-Anam 6:114].

It is the Khilafah alone that will unify the Muslim World as the world’s largest state, striking fear in the hearts of the colonialist powers, even before it mobilizes its armies. It is the Khilafah alone that will mobilize the Ummah’s armed forces for the liberation of Al-Masjid Al-Aqsa and Occupied Kashmir, as well as the Conquest of Hind. It is the Khilafah that will spread the light and guidance of Islam through Dawah and Jihad, as it did for centuries before, liberating entire countries from slavery to man-made law, such that legions of people can embrace Islam. It is the Khilafah that will pledge the souls of its military troops in defence of the honour of the Messenger of Allah (saw), such that the evil tongues will fall silent and the evil hands will fall still, whether in France, Sweden or the United States.

Enough of Democracy and its slavery to the US, O Muslims! Strive now with the Shabab of Hizb ut Tahrir for the re-establishment of the Khilafah (Caliphate) on the Method of Prophethood.

Frustration is not enough, when it is time for action and men of action. Act now to seize the hands of the oppressors, by granting your Nussrah to Hizb ut Tahrir under its Ameer, Sheikh Ata Bin Khalil Abu Al-Rashtah, for the immediate re-establishment of the Khilafah on the Method of Prophethood. Grant your Nussrah now for the pleasure of Allah (swt), averting His (swt) Wrath, which ambushes the rebellious, whilst restoring security, authority, ruling, dignity and honor for the Ummah of our Master Muhammad Mustafa (saw). Allah (swt) said,

“And do not be inclined to the oppressors or you will be touched by the Fire. For then you would have no protectors other than Allah, nor would you be helped.” [TMQ Surah Hud 11:113].