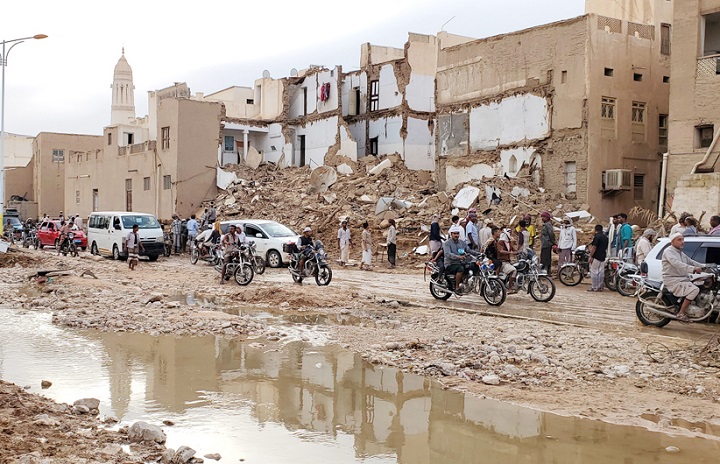 Torrential rains poured in Tariam district in Hadramout governorate on 4th May, and led to the death of five people, demolished nearly 200 homes, and damaged people’s property. Faraj Al-Bahsani, governor of Hadramout governorate and his undersecretary for Hadramout Valley Affairs, Issam bin Habrish, as a result of failure and negligence of taking care of people’s affairs did not do what is necessary to reflect good care towards this flood pandemic, which made them subject to criticism inside and outside the governorate of Hadramout.

As for Prime Minister Mu’in Abdul Malik, he has done nothing for a whole week, that he must carry out towards the people who fall under his authority, except for crumbs that do not cover what happened to the people, because he also does not take into account a responsible outlook in the face of emergencies of natural disasters, as the government has been deeply indignant by its poor behavior towards the flood disaster. Under the responsibility of the government of Mu’in Abdul Malik, people in all southern governorates – from Aden to al-Mahra – suffer from poor public care, poor provision of electricity, water, education, health and roads services, and reached the point of mixing sewage with drinking water, as happened weeks ago in Aden Governorate!

At the same time, torrents swept through the district of Bara’ in Al-Hudaydah governorate on 2nd May, and caused damage to homes and agricultural terraces, so what did the Houthis do for them? Nothing, as the ruling criminals in southern and northern Yemen in their dealing with environmental disasters are partners and equal in poor care. Their offense amounts to welcoming the occurrence of environmental catastrophes, to seek help from Western foreign aid that leads the country and its people to destruction.

In the Islamic State – the Khilafah (Caliphate) – there is a special office (Diwan) of emergencies in Bait ul-Mal (the State Treasury) for Muslims specialized in dealing with emergency disasters such as floods, earthquakes and others, and it includes all that happen to Muslims from sudden accidents, and it is spent on emergencies from the revenues from the Diwan of Booties (Fai’) and Kharaj, and from revenues of the public property’s Diwan. And if funds are not available, it become obligatory on the Muslims, and it is collected immediately, and placed in Bait ul-Mal to be spent on it. And if the delay is feared, the state must borrow the necessary money, put it in Bait ul-Mal and dispose it immediately in the way it is due, then pay off this debt from what it collected from Muslims. Muslims will see it soon applied in reality, with the establishment of the Second Khilafah Rashidah on the Method of Prophethood. The Messenger of Allah (saw) said:

“Then there will be Khilafah according to the method of Prophethood.”
(Narrated by Ahmad on the authority of al-Nu’man ibn Bashir may Allah be pleased with him).