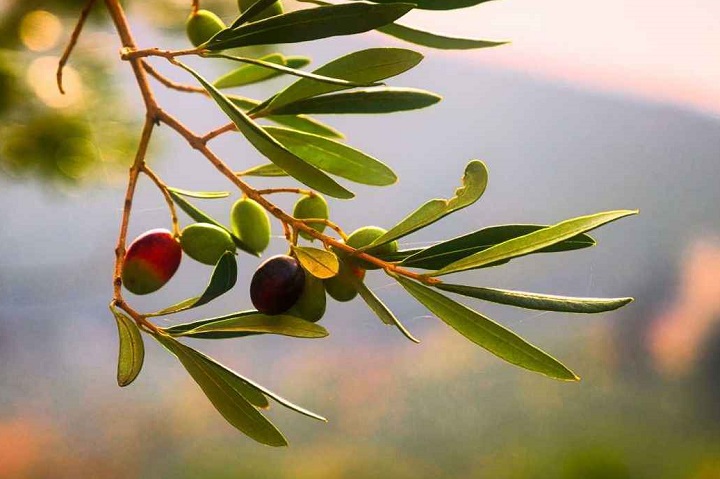 Our honourable Sheikh, May Allah benefit us with your knowledge and make your endeavor to support Allah’s true religion in the scale of your good deeds.

My question, my honourable Sheikh, do we get the zakat on olives from the olives or from the oil?

My brother, we adopt that there is no zakat on fruits other than wheat, barley, dates and raisins, and we have explained that in our books and the answers to questions:

The types of Crops and Fruits upon which Zakat is obliged
Zakat is obliged upon wheat, barley, dates and raisins due to what Musa b. Talha narrated from ’Umar who said: “Verily the Prophet (peace be upon him) only decreed the sunnah Zakat in these four: wheat, barely, dates and raisins.” Musa b. Talha also said: “The Messenger of Allah peace be upon him also commanded Muaz b. Jamal-when he sent him to Yemen- that he should take Sadaqah from wheat, barley, dates and grapes.” These Ahadith clarify that the Zakat in crops and fruits is only taken from these four types, namely wheat, barley, dates and raisins. It is not taken from other types of crops and fruits. This is because the first Hadith begins with the word “Innama” which indicates restriction. What also emphasises the limiting Zakat in these four types in what was collected by Al-Hakim, Al-Bayhaqi and At-Tabarani from the Hadith of Abu Musa and Muaz when the Prophet (peace be upon him) sent them to Yemen to teach people the matters of their deen; so he said: “Don’t take Sadaqah except from these four: Barley, wheat, raisins, and dates.” Al-Bayhaqi said of this Hadith: Its narrators are trustworthy and it has a continuous transmission. This Hadith is explicit in limiting the taking of Zakat in crops and fruits in these four types, because the “illa” (except) if preceded by the article of negation of prohibition would mean restricting what is before it to what is after it i.e. restricting the taking of Sadaqah to the four types mentioned after it. These are barley, wheat, raisins and dates.

Also as the words wheat, barley, dates and raisins which came in the Hadith are defective nouns (not derived), then these words do not cover others whether through their direct meaning (Mantuq), their indirect meaning (Mafhum) or by indispensable indication (Iltizam). This is because they are not descriptive nouns (Asma Sifaat) or nouns of meanings (Asma’ Ma‘ani); rather they are limited to the specific assets (’Ayaan) that are named or mentioned.

Therefore one could not derive from their wording does not indicate these meanings or descriptions. These Ahadith that restrict the obligation of Zakat to these four types of crops and fruits specify the general wording present in the Ahadith: “There is tithe on that land which gets water from the sky, and half-tithe on that land irrigated by a pot or Daaly (a sort of bucket).” So it means the tithe is due on whatever was watered by the sky of wheat, barley, dates and raisins and what was irrigated by a pot, Gharab or buckets.

Zakat is not obliged on other than these four types of crops and fruits. Therefore, no Zakat is taken from maize, rice, beans, chickpeas, lentils or other types of grains and legumes. Similarly, it is not taken from apples, pears, peaches, apricots, promenade, oranges, banana or other types of fruits because these types of grains and fruits are not included by the words wheat, barley, dates and raisins. Also there is no authentic and genuine text, Ijma‘a or analogy (Qiyas) covering them.

This is because Zakat is of the worships (’Ibadat) and analogy (Qiyas) does not function in worships which are strictly limited to the text. Likewise, Zakat is not taken from vegetables such as cucumber, squash, aubergine, turnip, carrots etc. It has been narrated from ’Umar, Ali, Mujahid and others that there is no Sadaqah on vegetables as narrated by Abu Ubaid, Al-Bayhaqi and others.] End of Quote.

3- Then, in a previous Answer to Question dated 12/1/2005, we touched on the zakat on olives according to the schools of thought, so we said:

[…………And they differed regarding the zakat of olives:

So the zakat of olives must be paid according to the Hanafis, Malikis, and Shafi’is in the old days, and according to Ahmad’s narration.

And the Shafi’is in the new, and Ahmed in the other narration, they said that there is no zakat on olives. (See Al-Mughni, Sharh Al-Minhaj and Al-Sharh Al-Kabeer, Chapter on Zakat)

Thus, you see that the doctrines are different except for the four types. And I mentioned to you their differences only because you mentioned that the schools are unanimous on all kinds of crops and fruits. Otherwise, what counts is the evidence, and we have shown the correct evidence applicable to the subject and that zakat is only in the four categories mentioned because the correct evidence applies to them.] End of Quote.

I will quote to you something that came in this regard from the Kuwaiti Encyclopedia of Jurisprudence:

[The Kuwaiti Encyclopedia of Jurisprudence (24/ 348, with automatic numbering)

And the olives according to those who said that zakat is taken from them, if it is from the olives from which the oil is pressed, then a tenth of its oil is taken after its pressing, even if its oil was little; because it is the one which is saved, it is like drying out all the fruits. And if it was storing grain, then a tenth of it would be taken if the grain reached five wasqs. This is the view of the Malikis and the Hanbalis. Malik said: If the olives reach five wasqs, one-fifth of the olive oil is taken after it is pressed. And Abu Hanifa went to the fact that he takes out the tenth of it out of grain in any case.] End of Quote.