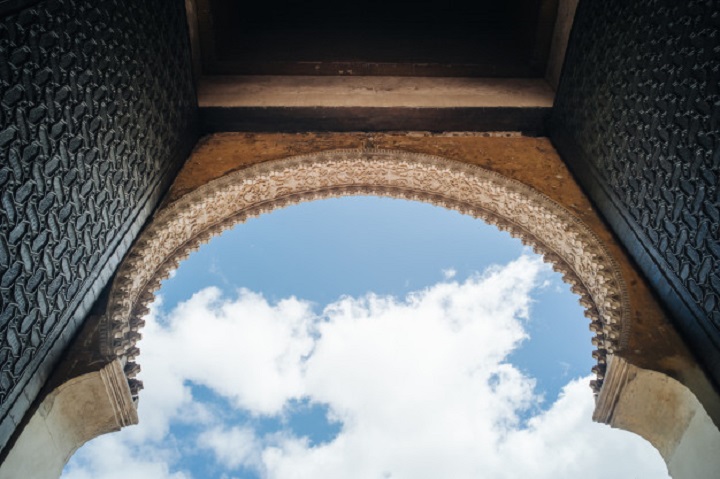 Answer:
The Hadith was extracted by Abu Dawud in his Sunan, he said: Hanad Bin As-Sarri told us, Abu Mu’awiyah told us, on the authority of Ismail on the authority of Qais on the authority of Jarir Bin Abdullah said that the Messenger of Allah (saw) sent a military expedition to Khath’am. So, some people (living there) sought safety by prostrating, but they were met quickly and killed. News of this reached the Prophet (saw) upon which he commanded that they be given half of the ‘Aql (blood money). And he said:

“I am free from every Muslim that lives among the idolaters (Al-Mushrikeen).” They said: “O Messenger of Allah: How is that?” He said: “They should not see each other’s campfires.”

To understand the intended meaning, we mention the following:

In the Draft Constitution Volume II – in the explanation of Article 189:

If the Muslim who lives in Dar Al-Kufr is unable to openly practice the rituals of his Deen there, then he has to move to another Dar Al-Kufr in which he would be able to do so due to His (swt) words:

“Verily, as for those whom the angels take (in death) while they are wronging themselves, they (the angels) said: “In what (condition) were you” they reply: “We were weak and oppressed on the Earth” They say: “Was not the earth of Allah spacious enough for you to emigrate therein”. Such men will find their abode in Hell – what an evil destination” (An-Nisa: 97).

1- Whoever is capable of emigrating, and is unable to openly practice his Deen in his country nor carry out the Islamic rules required of him – then the emigration to Dar Al-Islam is obligatory upon him. In this circumstance it is not permitted for him to reside in Dar Al-Harb, in other words, Dar Al-Kufr. Rather the emigration to Dar Al-Islam is obligatory. The evidence is the verse mentioned:

“Indeed, those whom the angels take [in death] while wronging themselves – [the angels] will say, “In what [condition] were you?” They will say, “We were oppressed in the land.” The angels will say, “Was not the earth of Allah spacious [enough] for you to emigrate therein?” For those, their refuge is Hell – and evil it is as a destination.” (An-Nisa: 97) as it is also suitable for deduction here. Additionally, this is indicated by what Al-Tirmidhi reported from Jarir that the Messenger of Allah (saw) said:

“I am free from every Muslim that lives among the idolaters (Al-Mushrikeen).” They said: “O Messenger of Allah: How is that?” He said: “They should not see each other’s campfires.” meaning that if both of them lit their fires you could not distinguish between them, as an allegory to not live in their abode. And in the narration of Abi Dawud,

«قَالُوا: يَا رَسُولَ اللَّهِ، لِمَ؟ قَالَ: لا تَرَاءَى نَارَاهُمَا» “I am free from every Muslim that lives among the idolaters (Al-Mushrikeen).” They said:”O Messenger of Allah: How is that?” He said: “They should not see each other’s campfires.” Likewise, an-Nasa’i narrated, and the meaning of their fire should not be visible to each other, i.e., it is not in a place where their fire is seen, and can be seen when it is ignited… a metaphor for not living in their land.

2- The one who is capable to emigrate, but is able to openly practice his Deen in his country, and establish the Shari’ah laws required of him. In this case the emigration is recommended and not obligatory…the evidence being that the Messenger used to encourage emigration from Makkah before its conquest while it remained Dar Al-Kufr, and explicit verses were revealed regarding it such as His (swt) words:

“Indeed, those who have believed and those who have emigrated and fought in the cause of Allah – those expect the mercy of Allah. And Allah is Forgiving and Merciful.” (Al-Baqara: 218)

“The ones who have believed, emigrated and strove in the cause of Allah with their wealth and their lives are greater in rank in the sight of Allah. And it is those who are the attainers [of success].” (At-Tawba: 20) and this is all explicit in requesting emigration. As for it not being obligatory, this is because the Messenger (saw) sanctioned Muslims to remain in Makkah. It is reported that when Nu’aim Al-Nahham wanted to emigrate, his tribe Banu Adi said to him: stay with us and remain upon your Deen, and we will prevent whoever wishes to harm you, and continue to support us as you have supported us; he used to help the orphans and widows. And so he delayed his emigration for a period and then emigrated later, and so the Prophet (saw) said to him:

“Your people were better to you than mine to me, my people expelled me and wanted to kill me, whereas yours took care of you and protected you” (mentioned by Ibn Hajar in Al-Isabah).

3- As for one who was not capable, then Allah (swt) is forgiving, and he is not requested to do so due to his inability to emigrate, either due to sickness or being forced to stay, or due to weakness such as women, children and the like. The evidence is His (swt) words: (إِلَّا ٱلْمُسْتَضْعَفِينَ مِنَ ٱلرِّجَالِ وَٱلنِّسَآءِ وَٱلْوِلْدَٰنِ لَا يَسْتَطِيعُونَ حِيلَةً وَلَا يَهْتَدُونَ سَبِيلاً) “Except for the oppressed among men, women and children who cannot devise a plan nor are they directed to a way.” (An-Nisa’: 98).

4- As for one who is able to practice his Deen openly in his country, and implement the rules of the Shari’ah requested from him, and at the same time he possesses the capability to transform the Dar Al-Kufr he lives in into Dar Al-Islam – it is prohibited in such a situation for him to emigrate from Dar Al-Kufr to Dar Al-Islam, irrespective of whether he possessed the capability himself or by organising himself with the Muslims in his land, or through getting help from Muslims from outside of his land, or through cooperation with the Islamic State, or through any of the permitted means. It is obligatory upon him to work to change the Dar Al-Kufr into a Dar Al-Islam, and in such a situation it is prohibited for him to emigrate from there. The evidence for this is that the work to make his land join to Dar Al-Islam is obligatory, and so if he does not support it and he is capable to perform it and left behind the action of seeking it to join the Dar Al-Islam and instead emigrates, then he has committed a sin just like the neglect of any other obligation.

Based upon this, if there was a Dar Al-Islam, taking up permanent residence in Dar Al-Kufr is prohibited for the one who is obligated to emigrate…]