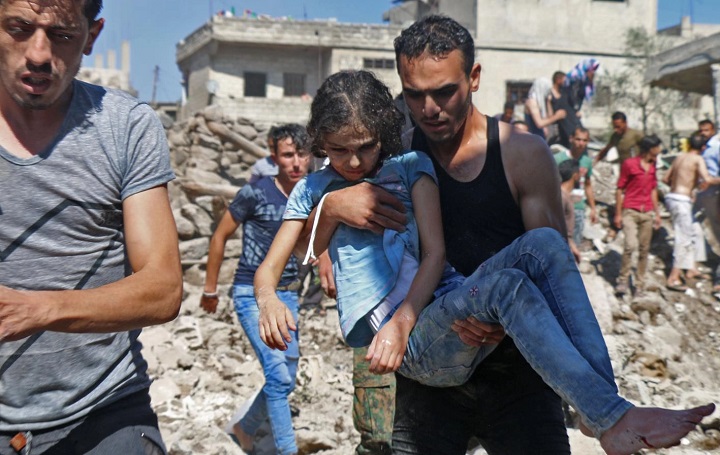 The criminal Syrian regime and its “opponents” in Daraa governorate reached an agreement to hand over the remaining light weapons to former “oppositions”, as well as erecting a number of military checkpoints and making settlements in exchange for lifting the siege imposed a month ago on Daraa al-Balad and stopping a military operation that the regime had been mobilizing a few days ago, according to a local source.

Since Daraa Governorate was handed over with the conspiracy of the leaders of the linked factions and with the complicity of the Military Operations Center (M.O.C.) three years ago; subsequently, Daraa did not desert the revolution for one hour, as the demonstrations did not stop, neither did the actions against the criminal Assad regime, who was unable to limit or stop these activities, as he has been concluding agreements after agreements with many areas in Daraa in the hope that these actions would stop, but it was in vain. The pace of the actions is increasing and the area is growing, and today the city of Daraa is at the forefront of the scene as it was at the beginning of the revolution.

Once again, the role of the linked failing leaderships is renewed which was and still represents a lifeline for him from an inevitable fate. As soon as Daraa returned to the front, the scene was commanded by those who surrendered the country in 2018 through the gate of the Central Committee. So, they assigned themselves the task of negotiating with the regime and handing over the rest of the country to it, after it was previously unable to impose its control over it, through an agreement whose terms are vague and malicious, to say the least, similar to the terms of the conspiracy conferences in Astana and Geneva. Dozens of soldiers and vehicles entered Daraa under this agreement, where the aim was to dismember the city; and isolate its sons and complete the task of controlling, and thus eliminating the cradle of the revolution in Daraa.

The regime of the tyrant of Ash-Sham attempts to follow the path of Tamerlane (Timur Lenk) in his dealings with the city of Damascus when he offered peace to its people. He asked them to hand over weapons and money, and after they responded to his request in accordance with Ibn Muflih’s desire “to spare blood”, he shed their blood; captured their children; raped their women; and burned their homes.

So, O our people in Daraa in particular; and in all of Ash-Sham in general, if you want to survive and return to the revolution its original course; you must realize that the descendants of Ibn Muflih, who handed over the country in 2018, will not preserve it today, but will continue what they started until they fully complete their mission. Your duty today is to denounce these linked and failing leaders, and change them with sincere people among your sons and brothers and you have to persevere and be patient and finish what you started. These agreements will not spare your blood, and will not preserve your honor or dignity, for there is no covenant or pact for the tyrant of Ash-Sham, and those who contracted them do not represent you. What you witnessed of the betrayal of these leaders and some personalities is enough for you to realize the goals of this agreement, and what you made of great sacrifices during the past ten years of the revolution should motivate you to work sincerely until you reach what you came out for in your revolution. It is the overthrow of the regime with all its pillars and symbols and the establishment of the rule of Islam in its place.

O our people in Daraa, you are the cradle of the revolution of dignity and its first spark, so do not submit to leaders who have accepted for themselves to be tools in the hands of the enemies of the revolution and they lack their decision.

O Muslims in the land of Ash-Sham, the abode of Islam:

You have realized very well that the main reason for what Ash-Sham revolution devolve to was this factional system and its leaders, which fed from forbidden political money; and has been linked to the so-called supporting countries, and therefore this linked system will not move a finger in support of our people in Daraa; because it is not a decision maker; as it did not move a finger in support of Jabal al-Zawiya or others. As you have well realized the danger of not adopting a clear political project and taking a sincere and conscious political leadership, and that there is no guarantor but Allah Almighty. And that whoever tries to help you by doing something here or there will have the same fate as Abu Khawla at the hands of a state that claimed its support for the people of Ash-Sham.

To get out of the bottleneck, you must hold fast to the rope of Allah alone, and adopt a clear political project that emanates from the Aqeedah of Islam and the religion of Allah Almighty, and for you to have a conscious and sincere political leadership that is like the captain of the ship, revealing to you the conspiracies and traps set up by the enemies of Islam and the enemies of the revolution of Ash-Sham. It shows you the straight path that you will take to reach safety, and other than that, you will be tossed by crashing waves until your ship sinks; and it will not be a time for regret, so shall we remedy our revolution and save ourselves, our honor and our sacrifices before it is too late?