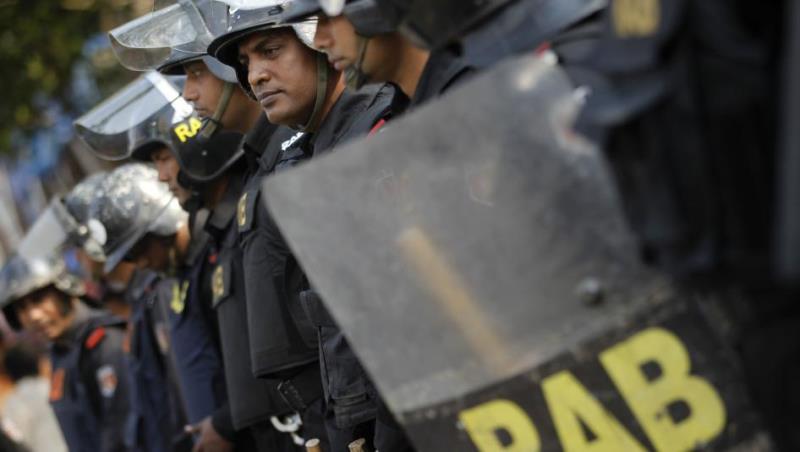 The sensational killing of Major Sinha Mohammad Rashed Khan (retd.) by Hasina government’s decorated officer-in-charge and some rogue police members in Cox’s Bazar on July 31 has brought the unproductive discussion on the extrajudicial executions to the fore again. Our pretentious intellectuals are expressing their opinion in talk shows and newspaper columns to reshape the police force as if it in and of itself is the problem. They are distracting people’s attention away from the root cause, that is, the secular ruling system in which the regime has sovereign authority and has made extrajudicial killings, abduction-murders, remand-torture regularly used tools by the State to suppress the people. Without challenging the sovereign authority of Hasina government to oppress the people, analyzing and criminalizing extrajudicial killings and other terrorizing activities of Hasina government’s law-enforcing agencies would indeed be worthless. This can happen if the opinion leaders surrender themselves to self-chosen ignorance by blaming the police only in a bid to safeguard the criminal secular regime of Hasina, or if they submit to the intimidation by Hasina government.

As a matter of fact, the current secular regime and secular system have been forcefully imposed on the Muslim population by the Kafir colonialists. Under the secular system, the regime has sovereign authority and is always beyond all accountability. They secure the interests of themselves, their coterie of capitalists, and their masters – the Kafir colonialists and oppress the greater population and resort to brutality to suppress any protest by the people. And when things turn bad, the regime is not bothered at all to sacrifice some of the corrupt police members as scapegoats. It is only due to the unexpected incident of Major Sinha (retd.)  that this regime had to sacrifice its sincere servant Pradeep Kumar Das who was conferred the highest police award, Bangladesh Police Medal (BPM), in 2019 for his ‘gallantry’ during ‘crossfire’ and ‘gunshots’! So, individuals of law-enforcing agencies can be sacrificed in due course, but not the ‘institutionalized terror’, which is lifeline for these rogue puppet regimes. Hence, we saw how quickly the Chief of the Bangladesh Army, the bastion of Western-backed secular democracy in Bangladesh, came forward to tackle the crisis by labeling this murder as an ‘isolated incident’, as if Major Sinha (retd.) was merely a ‘collateral damage’ of the systematic extrajudicial executions. These sell-out army Chiefs and Generals provide protection to Hasina’s client-regime during the time of election, and shamelessly remain indifferent to the state-sponsored murder of their sincere officers in Pilkhana to protect the American-Indian hegemonic order in our land.

O People of Bangladesh! After every incident of State violence and unlawful killing by law-enforcing agencies, you hear the empty rhetoric on constitutional guarantee of fundamental rights to life and expression. But in reality, our secular rulers never hesitate to do away with you in order to protect their regime by means of fear and persecution as they are not restrained from tyranny by fearing Allah or Divine accountability. On the other hand, the Khilafah system is from Allah Al-Hakeem (the All Wise) who sent this ruling system as a comprehensive solution to the problems of mankind and as a mercy, not as a punishment. So, Khilafah will not be a police state that violates the sanctity of its citizen and attack their dignity and honor. The coming Khilafah shall ensure the safety and security of every citizen by implementing the respective articles of the Draft Constitution of the Khilafah derived by Hizb ut Tahrir from the Qur’an and the Sunnah.

Firstly “In origin, every individual is innocent. No one should be punished without a court verdict. It is absolutely forbidden to torture any one; and anyone who does this will be punished” (Article 13). So, there will be no room for torturing or harming people in the name of remand, let alone for forced disappearance, crossfire or extrajudicial killing.

Secondly: Unlike the oppressive police force of the current Islamic lands, all the internal security forces including the police of the Khilafah State will exist to protect the security, dignity and honor of its citizen from any kind of harm and threats: “The Department of Internal Security is responsible for everything related to security, and prevents anything that threatens the internal security…This department has branches in the provinces, each of which is called (Section of Internal Security) and the head of the section is called the Police Chief, Sahib al-Shurtah, in the province (Article 70, Hizb ut Tahrir’s Draft Constitution of Al-Khilafah). As part of ensuring protection and security of the citizen, Khilafah’s Internal Security Department ((Da’irat ush-shu’oon id-dakhiliyya)) will monitor the actions which could lead to a threat to internal security: The most prominent issues that threaten the internal security that are under the responsibility of the department of Internal Security to treat are: apostasy, rebellion and banditry, attacks on people’s wealth, attacking people and their honour and co-operating with the people of suspicion who spy for the belligerent disbelievers” (Article 72, Hizb ut Tahrir’s Draft Constitution of Al-Khilafah). Therefore, under the Khilafah, using security forces for suppressing people’s rights and for political repression are absolutely forbidden.

Thirdly: In the Khilafah, people will have all the rights to express their opinion and hold the rulers accountable if they think that rulers are on munkar (wrong) or neglecting their affairs: “Calling upon the rulers to account for their actions is both a right for the Muslims and a fard kifaayah (collective duty) upon them.” (Article 20, Hizb ut Tahrir’s Draft Constitution of Al-Khilafah). Hence, accounting the rulers is not deemed as security threat, very unlike today’s tyrannical States, where the tyrant rulers’ intent in protecting themselves and their masters and crushing those who are speaking the truth.

Moreover, apart from a strong Department of Internal Security, there will be an independent “Court of Injustices Acts (Madhalim)”, as per Article 87 of Hizb ut Tahrir’s Draft Constitution of Al-Khilafah, with extensive power to remove all injustices which have been inflicted upon any person who lives under authority of the state irrespective of their caste, color, religion or social status. Article 90 of Hizb ut Tahrir’s Draft Constitution of Al-Khilafah clearly states: “The court of Injustice Acts has the right to remove any ruler or civil servant in the State, in the same way that it has the right to remove Khalifah, if the elimination of the Madhlamah (injustices) required this removal”. Dear people, Hizb ut Tahrir thus calls upon you to double your efforts for re-establishing the promised Khilafah on the method of the Prophethood which is your only panacea. Since Khilafah will not run to fulfill the vested interests of some elites and neither will it be a client-regime of the kafir colonialists, naturally, the relationship between the state and citizen will be guided by the Hukm Shariah that will ensure your safety, security and bring tranquility back to your lives which you have lost after the destruction of the Khilafah in 1924.

O Sincere Officers in the Bangladesh Military! When will you wake up from the deep slumber and remove your hands off your treacherous leaders and the puppet rulers who have stained their hands and ugly faces with the blood of your fellow brothers? Earlier, it was the blood of your courageous brothers in Pilkhana, and now another brother fell victim to this evil secular ruling system. Unless you use your material power that Allah Azza Wa Jal has bestowed upon you to reestablish the second righteous Khilafah on the method of Prophethood by overthrowing the current secular regime from authority at once and eliminate the threat to the security of this land and safety of your institution which is a source of your pride, it is not very far that either you or your family members will also fall prey to the very regime and ruling system that you are ardently giving protection to.

“O you who have believed, respond to Allah and to the Messenger when he calls you to that which gives you life.” [Surah Al-Anfal, Ayah 24]