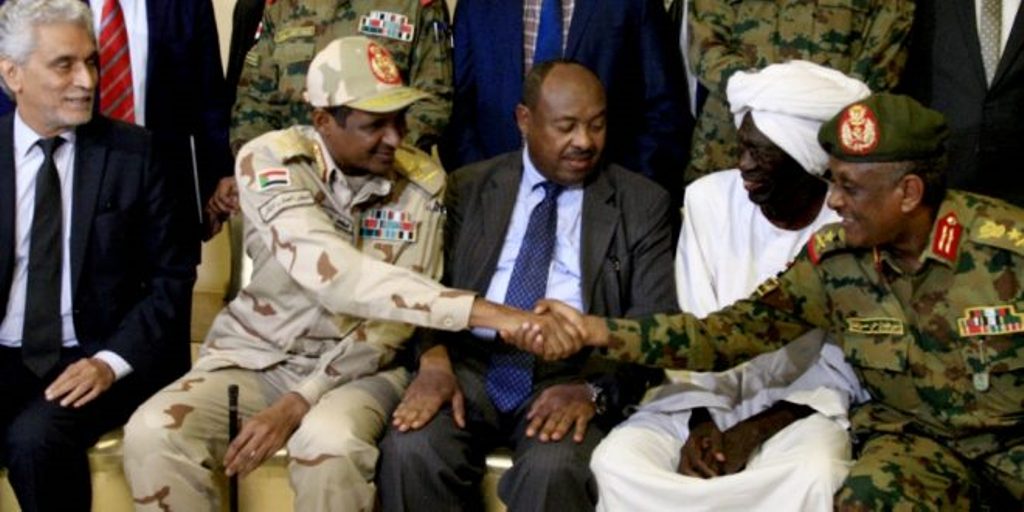 “The Transitional Military Council of Sudan and the forces of the Declaration of Freedom and Change signed a preliminary agreement on the Political Declaration document on Wednesday morning, 17/07/2019, while postponing the agreement on its constitutional counterpart to a later date. The document, which was signed by representatives of the parties and mediators, included the tasks and formation of the three levels of governance during the transitional period, represented by the Sovereign Council, the Council of Ministers and the Legislative Council. The two parties, according to the document, failed to agree on the composition percentages of the Legislative Council”. (Newspapers and agencies, Wednesday 17/7/2019).

There is no doubt that this agreement, like other agreements, does not represent the will of the people of the country. Rather, it is foreign pressures and political quotas to divide the “cake” and not to solve the problems of the people and the country, as the Western colonial dictates are clear. This is confirmed by the Western statements on Sudan, which order and prevent as they wish, as if the country has no sovereignty and without any respect for its people. The Sudan Tribune site has published on Tuesday 16/7/2019 under the title: “U.S. Congress calls on Sudan to transfer power to civilians and respect for democracy”: (The US House of Representatives passed on Monday a bipartisan resolution, calling on the Sudanese government to transition power to a civilian-led government, respect democratic principles and end all violence against its citizens.). The Special Envoy for Sudan, Donald Booth, met on Monday, July 15, 2019, at the presidential palace in Khartoum, head of the Military Council, Abdul Fattah al-Burhan… The two sides discussed, according to the Sudan News Agency, the latest developments of the ongoing negotiations with the forces of the Declaration of Freedom and Change, to reach an agreement on formation of a civilian-led transitional government, and (the U.S. envoy described his meeting with al- Burhan as “good and fruitful”, and expressed optimism that the Sudanese will soon achieve their dreams of forming a government led by civilian and independent prime minister). Immediately after Booth’s meeting, the negotiating parties sat with the African and Ethiopian mediators, and behind them, rather in front of them America.

From all of the above, it is clear what Hizb ut Tahrir has been warning and affirming to the people that these negotiations are all Western dictates that achieve the goals and interests of the greedy colonial states in Sudan and do not achieve the interests of the people of the country. For the one who cares for the people of Sudan rather for all the Muslims in the world is a state that represents their creed and religion, namely, the second Khilafah Rashidah State (rightly guided Caliphate) on the method of the Prophethood. So, the people of Sudan must lift their hands from these forces which are associated with the colonizer, and work with Hizb ut Tahrir to achieve justice and security by establishing the rule of Allah, applying His Law, and expelling the Kafir colonizer from our country, by seeking Nusrah (victory) from the sincere sons of the Ummah of the people of power and prevention for the establishment of this great edifice, since the intervention of the colonist disbelievers is a disaster and evil.

“They wish you would have hardship. Hatred has already appeared from their mouths, and what their breasts conceal is greater” [Al-i-Imran: 118].