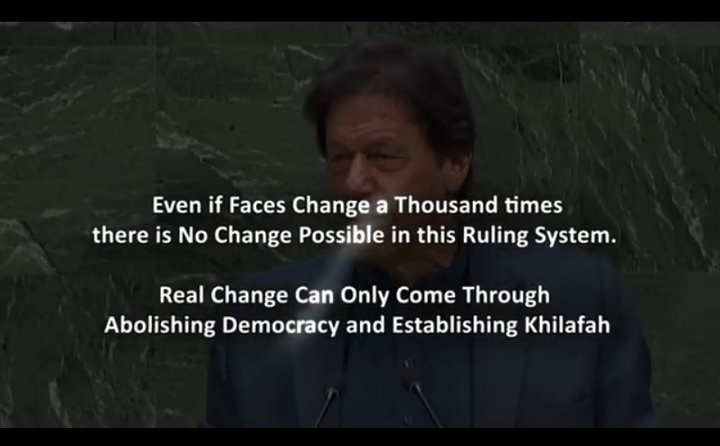 Even if Faces Change a Thousand times, there is No Change Possible in this Ruling System. Real Change Can Only Come Through Abolishing Democracy and Establishing Khilafah

The ‘corruption-free’ democracy project collapsed under its own weight in just three and a half years.

It was under this ‘corruption-free’ democracy that taxation was raised to unbearable levels, only to be thrown into the hands of the IMF and the usurious banking elite.

The treacherous abandoning of Occupied Kashmir, which began under Musharraf and then continued under Nawaz Sharif and Zardari, was completed under Imran Khan.

Under Imran Khan’s rule, like the previous governments, the interests of the colonialists were prioritized over looking after the affairs of the Ummah.

Clearly, the problem of Democracy is not that of a single individual.

Through granting law making to parliamentarians, Democracy is poisonous to its core.

The Muslims of Pakistan must not fall into any delusion or false hope.

Change can only come through the change of the ruling system, through the abolition of democracy and the re-establishment of Khilafah in its place.

Uproot this poisonous system and restore the system that is based on divine Revelation, sent down by Allah (swt), the All-Knowing.

It is time for you to stand with the Islamic Ummah and its project, by granting your Nussrah for the re-establishment of the Khilafah (Caliphate) on the Method of Prophethood.