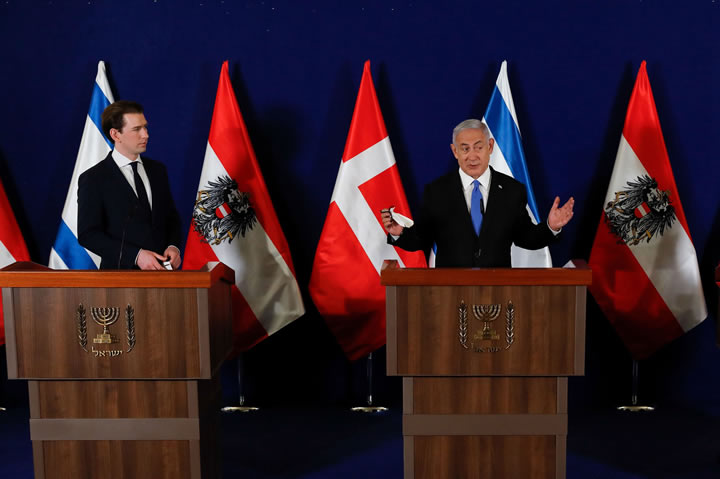 Last week on the 4th of March, the Austrian Chancellor, Sebastian Kurz, as well as the Danish Prime Minister, Mette Frederiksen, went abroad on a trip to visit Benjamin Netanyahu in Palestine, in pursuit of buying Coronavirus-vaccines and to discuss a future cooperation in terms of production and distribution of the vaccine. The Zionist occupation is regarded as the current frontrunner globally in terms of the vaccine process, which is why they currently have a surplus of vaccine doses.

The only outcome of the meeting, however, was a declaration of support and a pat on the back from Mette Frederiksen and Sebastian Kurz to the corrupt regime of Netanyahu amid his turbulent election campaign.

Comment:
The two heads of their respective states, Austria and Denmark, display an explicit support to the apartheid of the Zionists, which blocks the Muslims of Palestine from acquiring covid vaccines. The brutal and racist entity clearly does not regard the millions of Arab Muslims as human beings since it prohibits them from getting vaccinated. European leaders are ignoring this fact in order to acquire vaccines to their own white populations well-knowing that this means that many Palestinians will die without a vaccine. All this is not only a testimony to their cynical Capitalist views but also to their racist nature.

The swiftness of the vaccine process in the Zionist entity is neither a compliment nor praiseworthy, but a confirmation of the apartheid system enforced upon the Muslims of Palestine by the criminal Zionist regime.

It is not surprising that the Zionist occupiers are barring the Muslims of Palestine from access to vaccines against the Coronavirus. The illegal occupation has committed crimes and aggressions against the Palestinians for more than 70 years and restricted their rights in what can only be classed as a large prison.

As for discrimination and shaming Muslims, there is hardly any difference between the Danish Prime Minister and the Austrian chancellor, which is apparent in their internal policies targeting Muslims in Denmark and Austria.

This voyage also highlights similarities between the two heads of state and the Zionist rogue regime in terms of apartheid, discrimination, and vilification of Muslims. Although the means may differ, there is a clear resemblance in mentality between the Zionist occupation and the Danish government in their witch-hunt against Muslims, which is why this visit acts as a clap on the shoulder to the corrupt Netanyahu and his regime.

Mette Frederiksen has formerly hailed the terrorist occupation during her participation in Holocaust memorials in Jerusalem. Even though the Danish governments is vocal about human rights, and have been criticized by government parties for this move, the visit to the Zionist regime confirms that human rights and conventions are worthless and useless, when they fail to conform to the interests of these Western governments.

The Danish government and other Danish parties have clearly been inspired by apartheid with their discriminatory laws against Muslims in Denmark such as “The Ghetto Law”, restrictions on Muslims schools, “the Imam-bill”, and the Niqab-ban. Not to mention some of the latest propositions to tighten control of thoughts and views of Muslims who apply for citizenship or residence in Denmark.