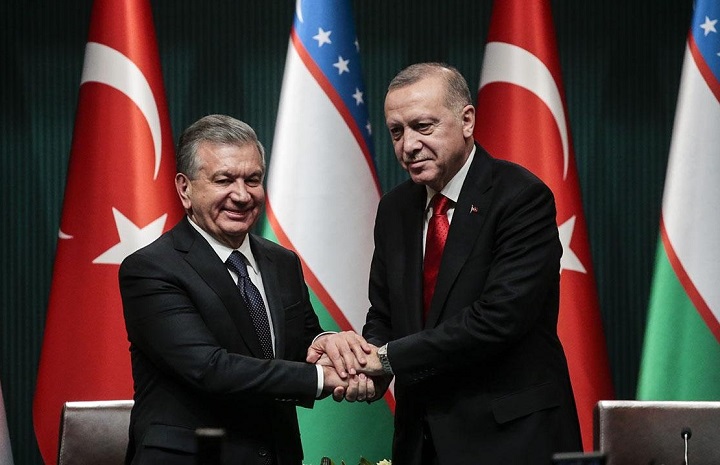 On March 29-30, Turkish President Erdogan arrived in Uzbekistan for an official visit, during which he met with President Shavkat Mirziyoyev. According to the news, during the meeting, 9 documents aimed at further expanding the multifaceted Uzbek-Turkish cooperation at the level of governments, ministries and departments of the two countries were signed. An agreement was also signed in the military field aimed at strengthening bilateral cooperation in the military field, combat training, military education, and the development of the defense industry.

If this meeting is dedicated to the interests of Islam and Muslims and the joint effort of Uzbek and Turkish Muslims to implement Allah’s rules and to unite and work together against our common enemy, the kafir colonial West, then we certainly welcome it. The Turkish and Uzbek Muslims have always had a solid love for Islam, and until now these countries are the focus of our enemies’ eyes, led by America, Russia and China. Naturally, after Mirziyoyev came to power, Uzbekistan began to develop warm relations with Turkey, which were very cold earlier. This is a fact, but the goal is not in the interest of Islam and Muslims, but only to please America. Because Mirziyoyev, after coming to power, is trying to please both America and Russia. To satisfy America, he seeks to restore and develop relations with countries under its influence, and one of these countries is Turkey.

Erdogan’s goal is also to implement America’s plans in Central Asia and to implement part of Turkey’s interests. Especially as the leader of the Organization of Turkic States, Erdogan wants to unite the Turkic-speaking countries on the basis of Turkish nationalism and not Islam. He is also doing this within the framework of the policy that America has drawn for him, which is to expand and strengthen America’s influence in Central Asia, especially in Uzbekistan.

Erdogan’s visit brings no good for Islam and Muslims; because he performed major services for America in Syria, Libya, Iraq and Afghanistan. He played a decisive role in misleading the blessed revolution in Syria and directing it towards America’s political solution; So, his visit to our country carries no good, his visit can only be interpreted as another step in expanding America’s influence in our country.

Therefore, Muslims in our country must be alert to such meetings, aware of their objectives. In particular they should be very vigilant on the visits of hypocrites and traitors like Erdogan who makes fiery speeches under the guise of Islam but he is actually anti-Islam.

“And they had planned their plan, but with Allah is [recorded] their plan, even if their plan had been [sufficient] to do away with the mountains” [Ibrahim: 46]