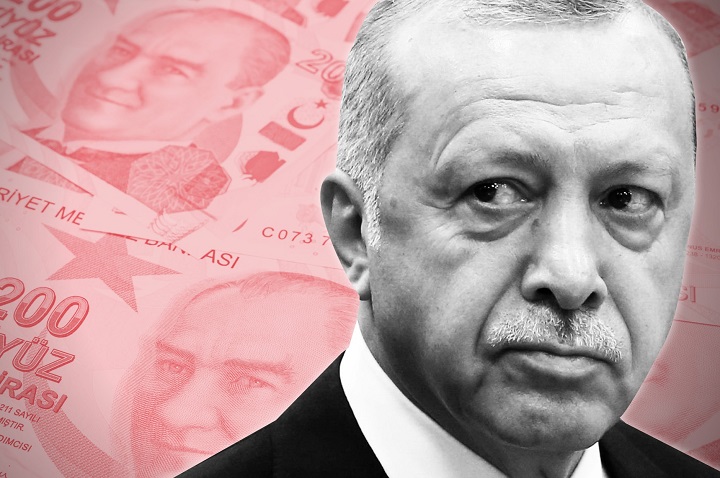 The devaluation of the Turkish lira.

Comment:
Turkey’s national currency, the Turkish lira, has drastically plummeted in the last quarter of this year, from 8.86 Turkish liras for one dollar in October to 16.42 Turkish liras for one US dollar. So, the Turkish lira lost almost double its value against the US dollar and that within a couple of months’ time. The main cause of the devaluation of its currency is due to the high foreign debts and its interest which Turkey is not able to pay it back on time. The Turkish Ministry of Finance announced this March that the main debt is 262.1 billion dollars but that it reached 448.4 billion dollars because of the interest and collateral fees on the debts. This is an increase of almost the double of the debt. Beside this, the urgent debts that Turkey has to pay in just one year have reached 168.7 billion dollars. Till now Turkey is not able to pay even the urgent debts in foreign currency. This deficit will be structurally included in the upcoming repayments which will drag Turkey into an ever-growing debt crisis. This among other factors created a lack of trust in the Turkish lira which resulted in the investment of foreign currencies instead of the Turkish lira, which escalated the devaluating of the Turkish lira even more.

President Recep Tayyip Erdogan, however claimed that the cause of the devaluating of the currency was due to manipulation of foreign powers in the financial market and that Turkey is in a midst of an “economic war of independence”. He refused to increase the interest rate in order to reduce inflation which goes against the basic Capitalistic economic theory which he implements. He said, “We will not crush our nation to interest” and exclaimed that he will not go along with those who support interest. He also said, “This issue is not an ordinary issue, what is the matter with our friends that they become defenders of interest. As long as I’m in office, I’m sorry, I will continue my fight against interest until the end, and my fight against inflation until the end.”  He even backed this with Islamic teachings and said: “What is it? We are lowering interest rates. Don’t expect anything else from me”. “As a Muslim, I’ll continue to do what is required by nas (referring to the prohibition of interest in Islamic texts).”

This week, the Turkish lira regained slightly after promises made by President Erdogan that he will compensate the savings of the citizens for currency fluctuations. This somewhat boosted the trust of the people for the Turkish lira and they began exchanging dollars for Turkish Liras. This means that the people are motivated to engage in interest-based savings but on condition that it based on Turkish Lira only. The state will then act as a guarantor for the deficit that is caused by currency fluctuations. So, effectively this means that a person or a company who has one million Turkish liras on his saving account will get two million Turkish liras a year later if the dollar would become twice as strong against the lira in one year. With other words: the state will pay more interest.

So, where is the “nas” Erdogan is talking now? Is the Islamic prohibition of interest only valid for US dollars and not for Turkish liras? For the past 20 years the society has been motivated to indulge in interest-based loans through state banks and state-sponsored loans where all kinds of interest-bearing transactions have been made permissible throughout his rule. The majority of the Turkish society is interest debtors and they are motivated to continue as long as they invest in liras. This makes his anti-interest stance and appearance over the recent years not very credible. More likely, he uses this as a covered excuse to blame the bad state of the economy and to escape his responsibilities. So far with regard to the “nas” related to interests. Where are the other “nas” to organise the hole of the society? Or didn’t any “nas” come to organise it? Like “nas” related to alcohol, prostitution, dress code, regulation of the sexes, education, finance, relations with other states, governance etc…

So, the interest based, action plan where the state will act as a guarantor for the deficit that is caused by currency fluctuations doesn’t only go against the Islamic teachings but it is also a false solution which will keep the corrupt system alive. This is because, in order to execute this monetary compensation plan, the state needs money which it doesn’t have. It’s not able to even pay off the interest of its own debts, how is it going to afford the compensation due to currency fluctuations? This means that the state will take more interest-based loans and increase its foreign debts even more, while these interest-based debts were the initial cause for its financial crises. Also, it will not be able to pay it back, which will create an everlasting chain of debt and an opportunity for the colonial powers to consolidate their hegemony even more.

The only solution for the currency crises in Turkey is not more Capitalism or more democracy but the establishment of Islam and the Khilafah (Caliphate) State upon the method of the Prophethood.