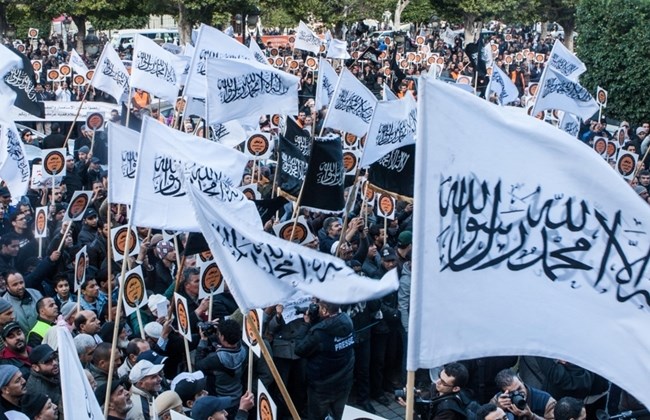 Despite ten years since the revolution began against the system that colonialism was instilled in Tunisia, the reality has not changed and the regime has not fallen, although some faces have been removed, and faces that are no less criminal and ugly were brought up! The reason for this is the misdiagnosis of the area of the disease and the severity of the scourge. The main problem lies in the foreign influence and its capitalist civilization system through which it controls the country, creating agents and the corrupt people and taking care of them, employing the corrupt media for them, protecting them with laws and decrees, and imposing them on the political scene by falsifying the will of the voters and by the pressure of its financial institutions. An integrated system of corruption, corrupting and looting, which the West and its ambassadors control its strings and tools. And whenever people succeed in removing an agent, the West replaces him with someone who is worse than him, and it is wrong to be preoccupied with the snake’s tail and let the head spew its poison into the body of the Ummah.

Today protests are renewed and renewed with them the circumvention and misleading of a political class (rulers and opposition) who are fighting among themselves to present themselves as the ideal servant of the West and its colonial interests. Some of them support the protests, even from behind a curtain to impose a constitutional status that enables him to jump to the decision power to be a guardian of the Western system and a High employee among the colonial circles, and some describe the protests and protesters as masked gangs and adhere to the corrupt system against which people revolted and led to mortgaging the country with a mountain of foreign debts and heavy burdens that crippled its capacity for renaissance and proper economic development, and caused its people to inherit poverty, marginalization, high cost of living, unemployment, blocked prospects, and regional inequality in addition to the deterioration of health and educational services.

And between this and that, the people remain lost, wanting to change the situation, and do not know how to achieve it?!

The focal reason that led to the production of the same system that the people revolted against on 17 December 2010, and which enabled the West to have more control over the country; planning, legislation and implementation is the revolutionaries’ lack of an alternative civilized project to the Western system, in addition to their lack of sincere and conscious political leadership, which led to exhausting the protesters with partial demands that distract them with symptoms of the problem without its core, as well as excluding Islam from governance and legislation so that people lose hope for change.

Today, radical change has become a matter that imposes itself on our people in Tunisia, and there is no alternative or option other than the serious work to change reality on the basis of Islam. Therefore, efforts must be united behind a sincere leadership to its Lord that adheres to His law, aware of the origin of the issue, knows the enemy and his tricks, to cut off his tampering hands with our country and our destiny, and that our slogan to be “the people want to implement Allah’s law.” Allah (swt) says: