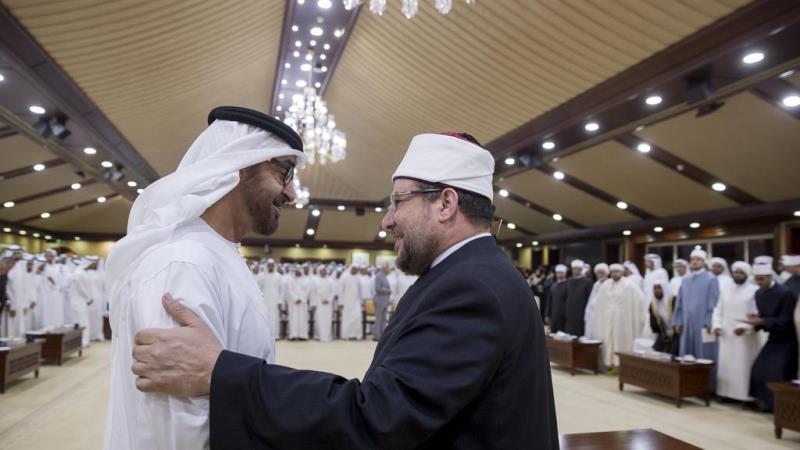 The Egyptian Minister of Endowment (Awqaf), Dr. Mohamed Mokhtar Gomaa, lost his calm, and could not contain his anger in the academic institute of knowledge, Zagazig University, during the discussion of a master thesis presented by the student Wajdi Abdul Qadir on “Renewing the Religious Thought in Islam…The Model of Muhammad Iqbal”. The Minister was furious screaming and threatening as he jumped out of his seat on the panel stage, shouting terms that were mentioned in the thesis that he considered as transgression against “Patriotic essence”, including: “The most dangerous of the new idols is “Patriotism”, and dressing up the religion with it is like a shroud.” The minister’s rage made him describe the student, who worked hard in preparing his thesis under the supervision of Dr. Sabir Abdel Dayem, former Dean of the Faculty of Arabic Language, as “stupid”, “ignorant” and “donkey”. The Minister said: “The master’s thesis provoked me because it contained paragraphs that carry ideas that threaten homelands. It has caused me great pain and distress, and the protection of the homeland is firmly rooted in our hearts and minds”.

This Minister defends with dedication and protectiveness the idol of “Patriotism”. It is known by everyone with the least knowledge of the Islam and its rules, that the concept of “Patriotism” is alien to the Deen and the Muslims and has no precedent or basis in the Shariah texts, neither in the Book of Allah nor in the Sunnah of the Prophet. The first to introduce the concept of patriotism was Sheikh Al-Azhar Rafa’a Rafi al-Tahtawi, who was sent by Muhammad Ali Pasha (in 1826) to be a religious mentor accompanying students studying useful sciences in France, or so he was supposed to, but he returned from France carrying the germs of Western secular civilization, with its diseased concepts and ideas that are not based on arguments or proofs. One of these concepts is the concept of “Patriotism”, which imposes on people to be confined to entities, to be taken as “Idols” giving justification to politicians to wage wars and bloodshed “for the sake of the homeland.” It is no wonder that the nineteenth century saw the start of the wave of Western colonization that burnt weak nations it reached; the European people tasted the repercussions of the “Patriotism” idol when they fought wars between them that did not stop until the end of World War II!

The concept of “Patriotism” is directly linked to the concept of national sovereignty and the supremacy of man-made law; this law, which defines rights and duties according to the whims of legislators in Parliaments: so a criminal who is due to be punished by the “Hudood” in one area, his sentence may be null and void across the border, all according to the whims and desires of legislators on both sides of the border! Although Europe has claimed to be, and continues to, the beacon holder of human liberal civilization, it is bothered when it hears about the arrival of those fleeing from the hell of its imperialist policies, and so it fortifies its borders to repel these “barbarians”, although their “human” ideology, if it is truly human, would have welcomed those who seek its support, let alone victims of the criminality of colonial policies. Indeed this is what Islam seeks in dealing with other nations: Muslims sacrifice their blood to enable others to get the true message of Islam, which does not discriminate between one person and another except by piety.

As for this Minister of Endowment (Awqaf), he should have been more angry at the violation of Allah’s sanctity and suspension of His Shariah and befriending of His enemies, the Jewish entity and Americans. Or become enraged because of the desecration of the noble Aqsa by the Jewish entity, or because of the shedding of Muslim blood in Ash-Sham. We advise him to recall the Iman position of the sorcerers of Pharaoh, who chose the pleasure of Allah despite the intimidation and terrorism of Pharaoh, and chose the life of the Hereafter over this perishable life, and they proclaimed the truth in the face of the tyrant Pharaoh without hesitation. We say to Dr. Gomaa that the “Patriotism” idol, which is sanctified by the law of the Kaffir West, Islam says it must be demolished, just as it requires worshipping Allah alone in Rububiyah and Ilohiya.. And the Message of Islam and its mercy and justice can encompass all people without discrimination, it did from the beginning and will, to the day of Judgemnet, and Allah’s Shar’ is the only Truth, and all the man-made laws are falsehood. It is better for you to seek Allah’s pleasure and not the satisfaction of the Rand Corporation or the colonial West, if you don’t, then we warn you of Allah’s saying:

“And recite to them, [O Muhammad], the news of him to whom we gave [knowledge of] Our signs, but he detached himself from them; so Satan pursued him, and he became of the deviators.”